Japan's Crown Prince Fumihito and his son, Prince Hisahito, will fly on separate planes to their vacation spot in Bhutan in August as a precautionary measure to protect the imperial lineage, after Emperor Naruhito's enthronement in May put them first and second in line to the throne, respectively, Imperial Household Agency sources said Wednesday.

Since the Japanese government maintains male-only succession rules, the only other imperial heir is former Emperor Akihito's 83-year-old younger brother, Prince Hitachi, who is third in line to the throne.

Such an arrangement was not needed prior to former Emperor Akihito's abdication in April, as the current emperor and his younger brother did not travel overseas together.

With Prince Hisahito now second in line to the Chrysanthemum Throne, the agency will have the crown prince and his son fly on separate commercial planes as a precautionary measure to protect the imperial lineage should anything happen to one of the aircraft, the sources said.

Crown Prince Fumihito will fly solo and Prince Hisahito will travel with his mother Princess Kiko, according to the sources. Their flights out of Japan will be staggered by a few hours but the family will be together at connections and their destinations in Bhutan, they said. 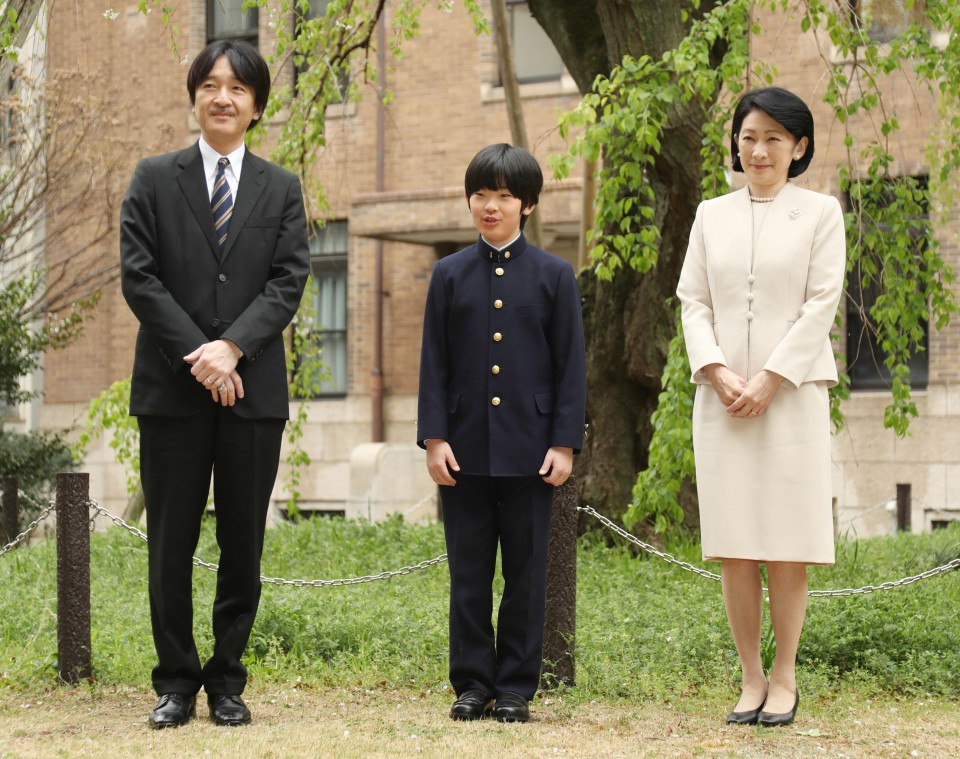 (Prince Hisahito with his parents, Prince Fumihito and Princess Kiko, before attending the entrance ceremony for a junior high school affiliated with Ochanomizu University in Tokyo)

It is the first overseas trip for Prince Hisahito, 12, the only male grandchildren of former Emperor Akihito.

The family will spend about 10 days in mid-August in Bhutan so the young prince can learn about a different culture and Bhutan's nature.

The imperial family as a whole encourages its members to have international experience. Emperor Naruhito himself traveled to Australia in 1974 as a junior high school student and studied in Britain after graduating from university.

With the country's imperial family shrinking "we must avert the potential risks associated with imperial heirs being on the same airplane together," said Yuji Otabe, an expert on imperial history and honorary professor at Shizuoka University of Welfare.