Lawmaker with disabilities promises to work for socially vulnerable

A newly elected upper house member who has severe physical disabilities said Friday her presence as a lawmaker will help turn Japan into a country where the socially vulnerable can live with ease.

Eiko Kimura, 54, of the political group Reiwa Shinsengumi, also voiced concern over the current welfare service system for people with disabilities, as commuting and other economic activities by them are not covered through public aid under the current system. 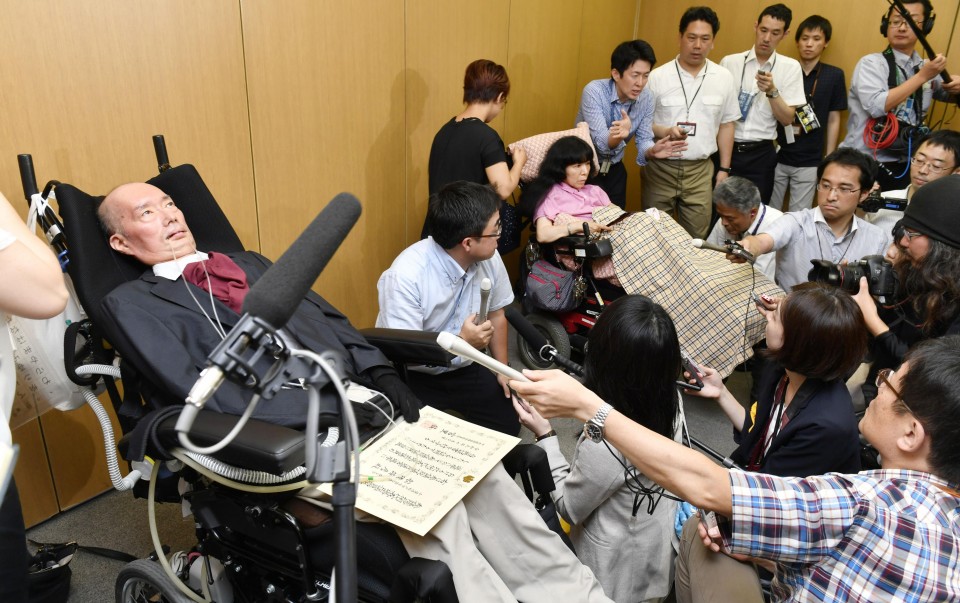 (Yasuhiko Funago, foreground, and Eiko Kimura after receiving certificates of election on July 26, 2019.)

"(For example) there's no system allowing lawmakers with severe disabilities to be at the Diet while receiving (necessary) care," said Kimura, who has cerebral palsy.

Kimura and Yasuhiko Funago, another lawmaker from the same political group who has Lou Gehrig's disease, received their certificates of election in proportional representation.

"I'm just overwhelmed and can't say a word," Funago, 61, said through his caretaker.

Since the disease robbed him of his voice, the caretaker read his message by following his eye movement on a letter chart.

Following their election, the upper house decided to start renovation work in parliament to provide barrier-free accessibility. It will also allow caregivers to enter the chamber to assist them.

Reiwa Shinsengumi was founded by actor-turned-lawmaker Taro Yamamoto to "challenge the establishment and status quo."