About 200 people attended a candlelight vigil in Hong Kong on Saturday to commemorate the death of Chinese Nobel Peace Prize laureate Liu Xiaobo.

Liu, who died aged 61 from cancer in 2017 while in state custody, was remembered for his efforts to advance democratic reform in China.

"Liu has no enemies, he has no hatred," said Albert Ho, chairman of the Hong Kong Alliance in Support of Patriotic Democratic Movements of China, in a memorial.

"He believed that all problems in China stem from a bad political system, which cannot be tackled by hatred but hope and perseverance," Ho added.

An outspoken critic of China's one-party political system, Liu was detained in December 2008 and sentenced 12 months later to an 11-year prison stint for "inciting subversion of state power" over his role in drafting a manifesto calling for peaceful democratic reforms, known as Charter 08.

"The Charter 08 Liu left us represented the dream of many people (of a democratic China). We must remember his ideology," a man surnamed Tsui said in tears after laying flowers at Liu's statue. "China changes fast, no one knows what the outcome will be."

Liu's wife, Liu Xia, who was put under house arrest after her husband was awarded the Nobel Peace Prize in 2010, is said to have suffered severe psychological distress, especially since her husband's death.

She left Beijing for Germany last year, a day after Chinese Premier Li Keqiang held a meeting with German Chancellor Angela Merkel in Berlin, where they are believed to have exchanged views on her departure. 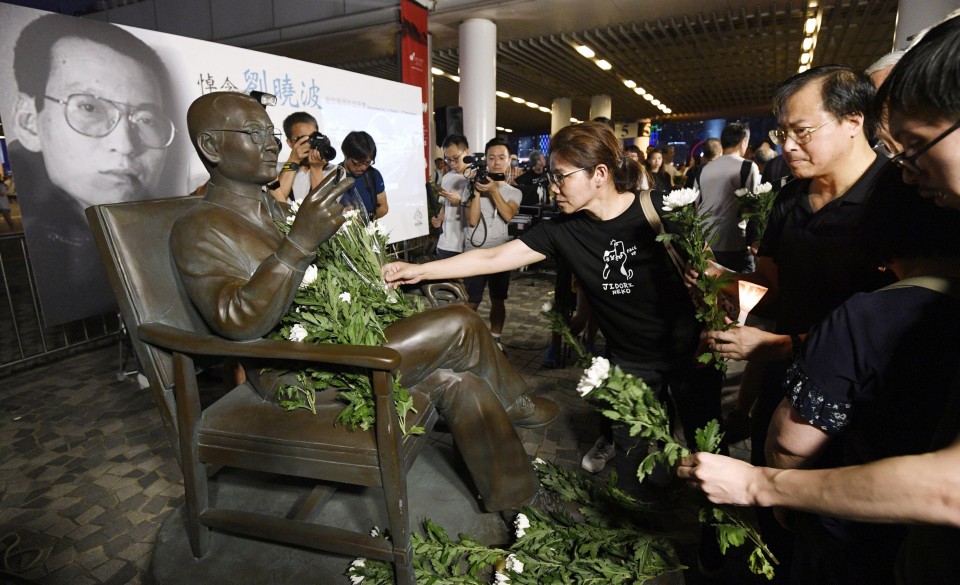