With the opening approaching of a new type of Kabuki showcasing visual effects at Japan's oldest theater, actor Nakamura Shido is excited to deliver a performance that still captivates audiences with the use of cutting-edge technology.

Shido and globally known virtual diva Hatsune Miku will take the stage together with the assistance of image projection technology this summer at the Minamiza Theater in Kyoto for Cho Kabuki "Hanakurabe Senbonzakura" from Aug. 2 to 26. 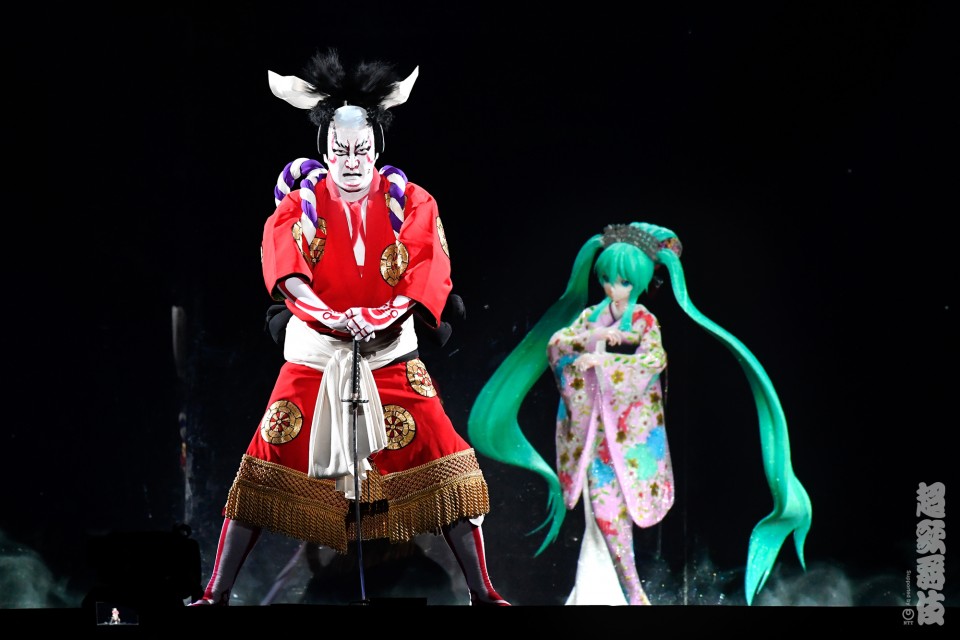 (Kabuki actor Nakamura Shido and virtual singer Miku Hatsune take the stage of Cho Kabuki together in Chiba, near Tokyo, in 2019.)
[Photo courtesy of Shochiku Co.]

The establishment of the Minamiza Theater in western Japan dates back to around the beginning of the Edo period (1603-1868). It reopened last November after undergoing large-scale reconstruction to make it an earthquake-resistant structure.

"A moving experience witnessed in any play will be generated when the heart of performers and audiences are connected," Shido said during a recent interview at the Kabukiza Theater in Tokyo.

"Even in the fusion of Kabuki with digital technologies, I think it was our performance that was able to reach their hearts," he said, referring to rave reviews received for the Cho Kabuki performance at previous events that were held under the concept of recreating the enthusiasm of a virtual world in real life.

Since it will be performed for the first time at a Kabuki theater, the show will feature some new attractions, such as midair stunts called "chunori," one of the great spectacles of Kabuki, Shido said.

The play depicts a myth surrounding a sacred cherry tree, starring Sawamura Kuniya opposite Hatsune in the shorter version.

Referring to the first Cho Kabuki performance, Shido said, "No one had thought the audience would go that wild," waving glow sticks and shouting out the "yago," traditional house names of their favorite actors such as Yorozuya for Shido.

"When we saw their reactions, we were really relieved. It was an unforgettable moment," Shido said.

Cho Kabuki has been performed four times from 2016 to 2019 at Niconico Chokaigi, an annual festival of Japan's internet culture organized by the social video website Niconico operated by Dwango Co. as part of efforts to attract a wide variety of audiences for the traditional Japanese theatrical art.

The performances drew on the emotional reactions among youth subculture enthusiasts.

"I think there are universal themes in Kabuki stories that we cannot help thinking or crying and laughing about even today, and that's why they stay alive," Shido said. "So even in the age of digitalization and progress of artificial intelligence, these universal stories will not die out," he said. 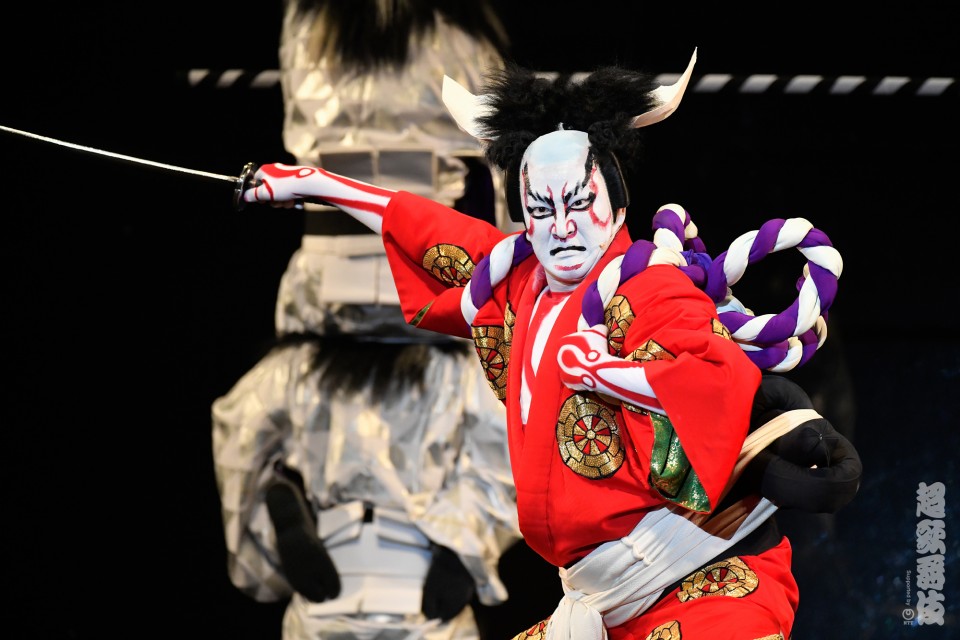 While admitting to the difficulties of integrating digital works with traditional Kabuki, he was impressed with state-of-the-art technology that made the staging of Cho Kabuki possible.

Nippon Telegraph and Telephone Corp. and Shochiku Co. have been developing new styles of Kabuki by utilizing NTT's latest technologies, including a technique called shadow cloning.

The technique, used in Cho Kabuki since its inception, allows for the creation of video image duplicates of Shido and the other actors in real time, according to NTT.

"Kabuki has always been the hippest traditional art since the Edo period," Shido said.

In its centuries-old history, Kabuki has been constantly expanding its horizons by incorporating new ideas and technologies of the time, according to Tadashi Abiko, executive vice president of Shochiku, the sole production company and operator of Kabuki.

Kabuki, which has been inscribed in the U.N. Educational, Scientific and Cultural Organization's Intangible Cultural Heritage list, has not merely existed for 400 years. It has evolved by mixing in leading innovations, such as electric lights, Abiko added.

"I hope some audiences who watched new Kabuki will be interested and connect with classic Kabuki someday," Abiko said. "In that sense, I think they are playing very important roles."

"I strongly believe that keeping classic Kabuki alive while pursuing progressive ideas is my way of life," Shido said.

Olympics an opportunity for Kabuki to broaden audience base