Hong Kong Chief Executive Carrie Lam said Monday her government will not withdraw its controversial extradition proposal despite a mass protest over the weekend that organizers say drew over one million people.

Lam's remarks come one day after Hong Kong people held one of the largest marches in the former British colony since its return to Chinese rule in 1997, over an extradition bill that could allow the transfer of fugitives to mainland China.

Suggesting that the Hong Kong government will go ahead with the proposal, she reiterated the need to plug the loophole in an existing law and avoid Hong Kong becoming a haven for criminals.

"There's no question of us ignoring views expressed in society," Lam told reporters. "But Hong Kong has to move on." 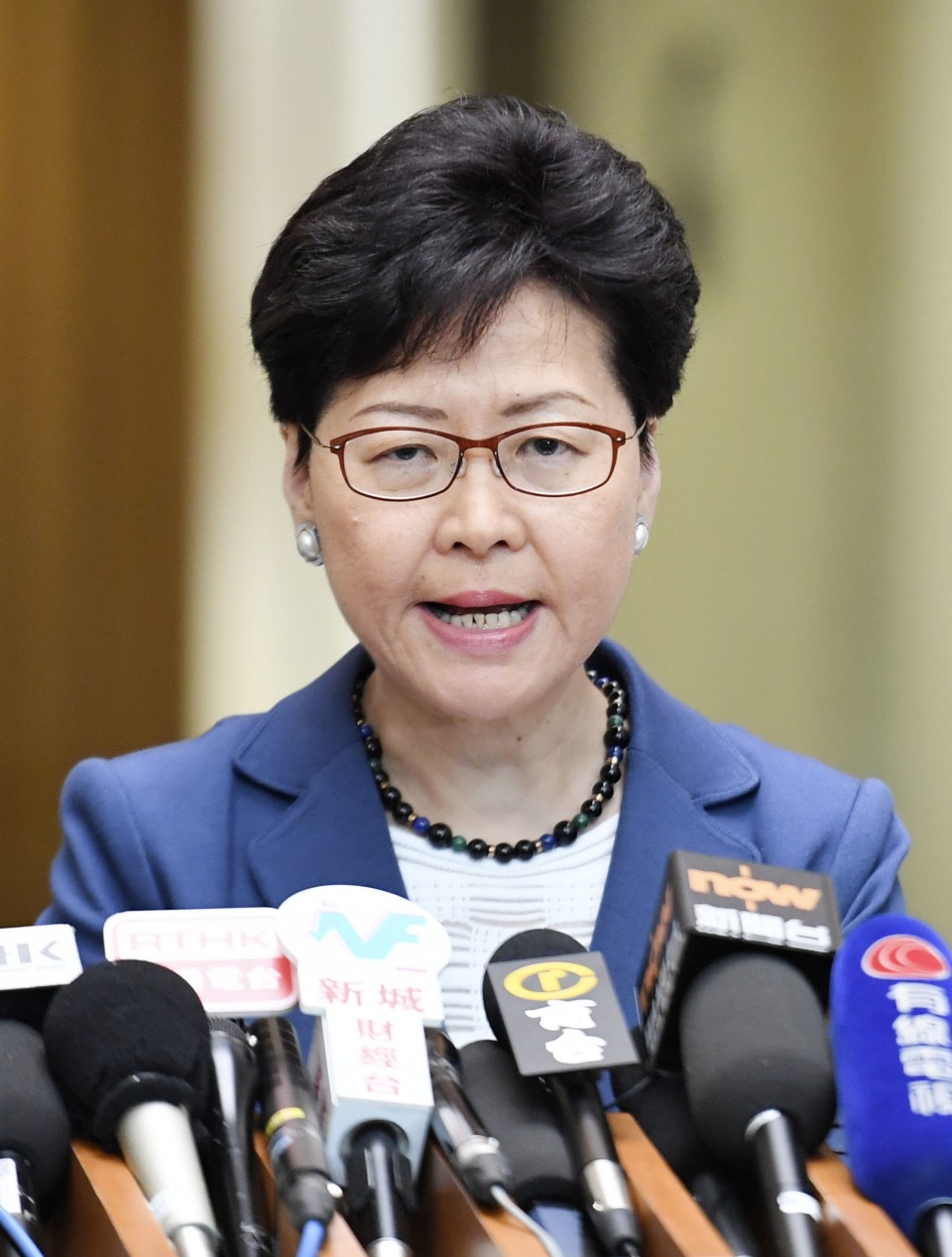 But Lam also promised to further improve the extradition bill by putting in legally binding human rights safeguards for the fugitives.

Meanwhile, Hong Kong police said a total of 19 people have been arrested after some protesters clashed with police following the mass march.

In Beijing, Chinese Foreign Ministry spokesman Geng Shuang claimed that there was interference by foreign forces behind the protest in Hong Kong, telling reporters that the government "firmly opposes" such interference. 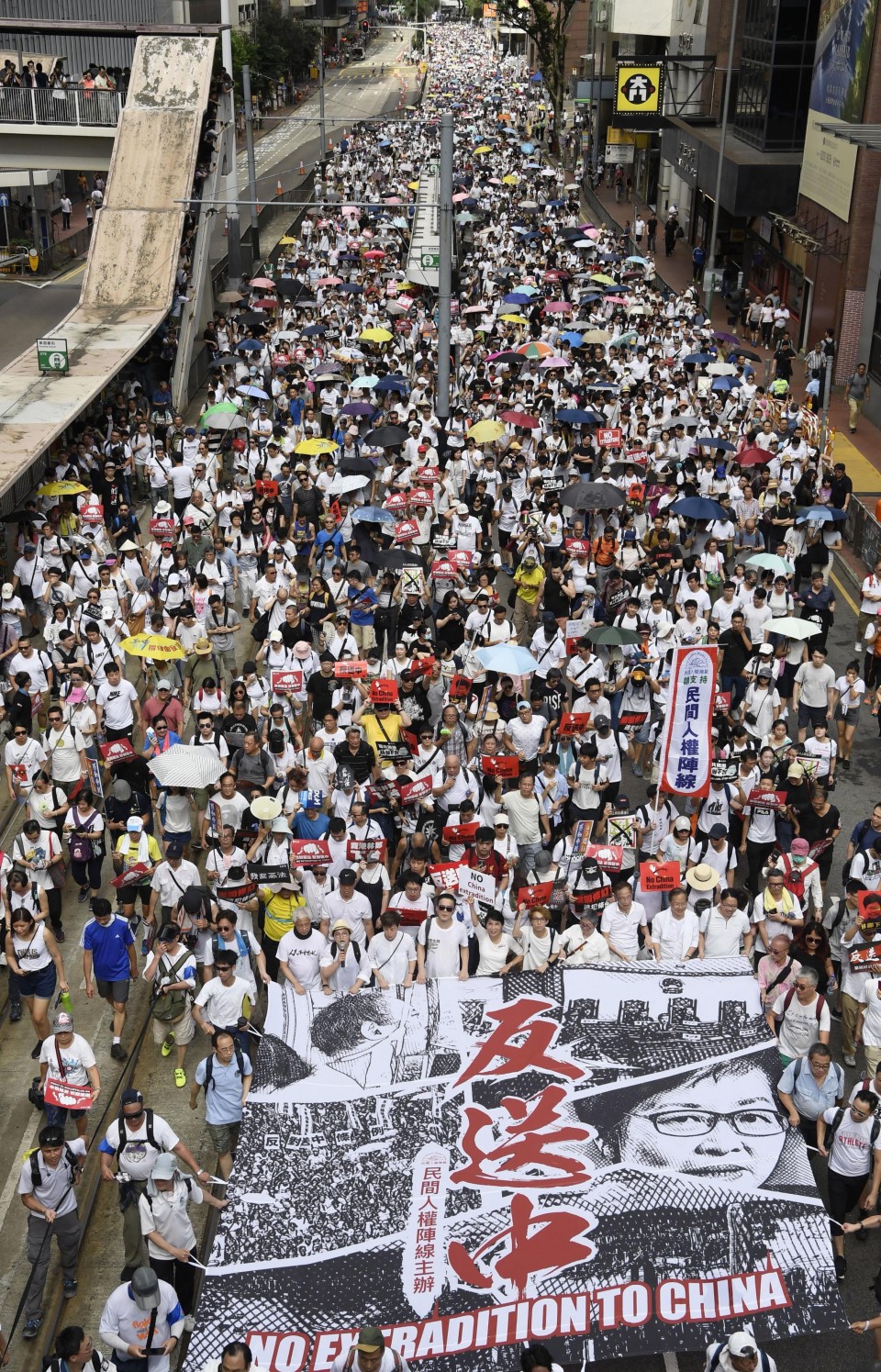 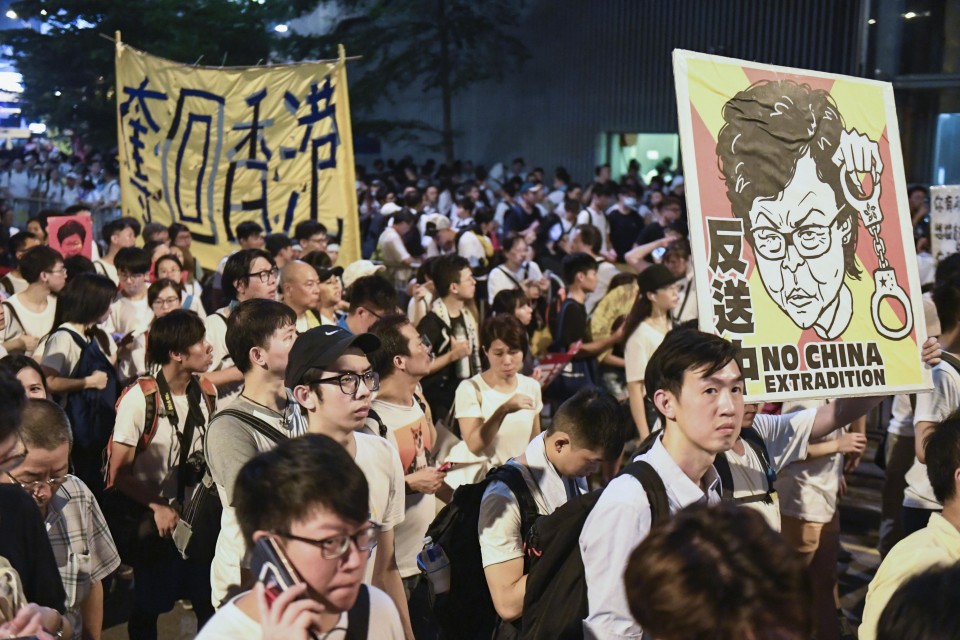 As many as 1.03 million people took to the streets in Hong Kong on Sunday, in the third march against the amendment bill on the Fugitive Offenders Ordinance and the Mutual Legal Assistance in Criminal Matters Ordinance since it was proposed in March, according to the organizer, the Civil Human Rights Front.

The protest turned violent when dozens of protesters clashed with police near the legislature while some staged a standoff with police on a thoroughfare into the early hours of Monday.

The protesters, dressed in white, chanted slogans such as "No to China rendition!" and "Withdraw the evil law!" as they marched under the scorching sun toward the government headquarters. At least eight police officers were injured. 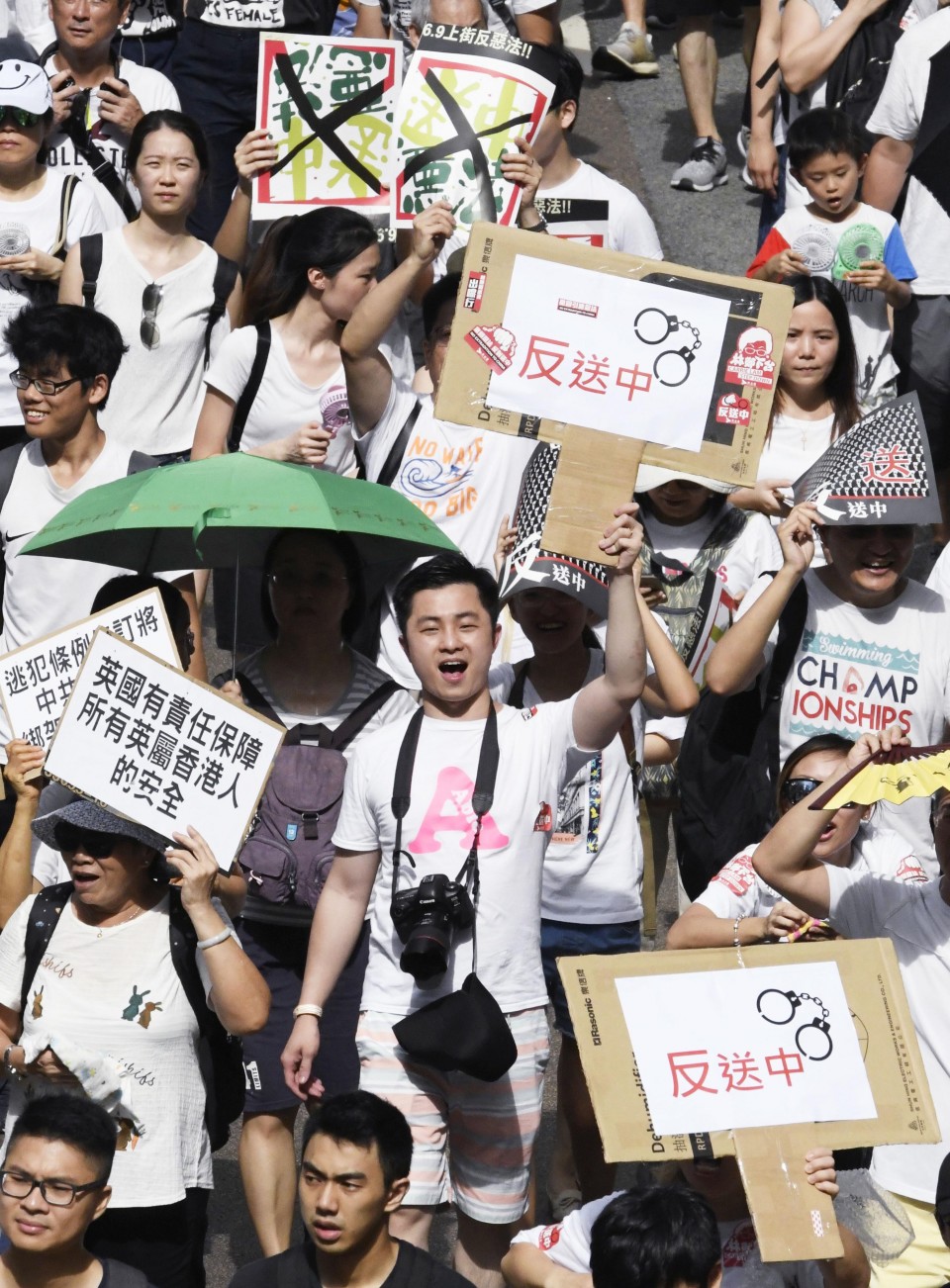 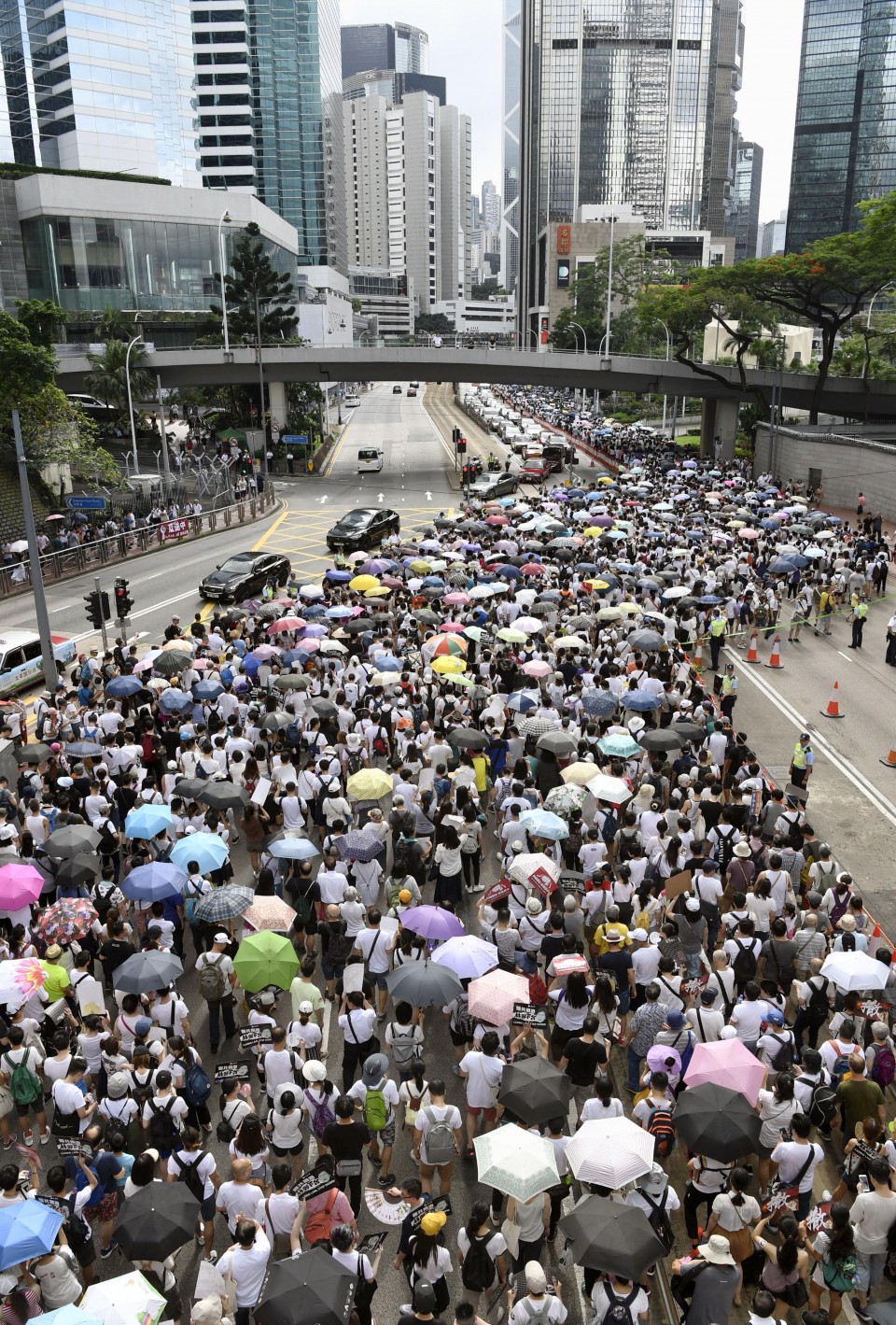 In cities in Australia, Britain, Canada and the United States, people also gathered Sunday in solidarity with Hong Kong people who oppose the amendment bill.

Preceding the Chinese Foreign Ministry response to the mass protest, the state-run China Daily said in an editorial on Monday that "some foreign forces" are trying to hurt China by creating havoc in Hong Kong.

"Any fair-minded person would deem the amendment bill a legitimate, sensible and reasonable piece of legislation that would strengthen Hong Kong's rule of law and deliver justice. Unfortunately, some Hong Kong residents have been hoodwinked by the opposition camp and their foreign allies into supporting the anti-extradition campaign.

"They have failed to realize that...some foreign forces are seizing the opportunity to advance their strategy to hurt China by trying to create havoc in Hong Kong," the editorial said.

Hong Kong has established extradition agreements with some 20 countries since the handover. The amendment would allow the return of fugitives to jurisdictions with which it has no extradition deal, such as mainland China and Taiwan.

The government has claimed that the amendment is urgently needed to bring justice to a Taiwan murder case, in which the prime suspect returned to Hong Kong. But the bill's opponents say it would erode Hong Kong's judicial independence, which is guaranteed by China under a "one country, two systems" framework. 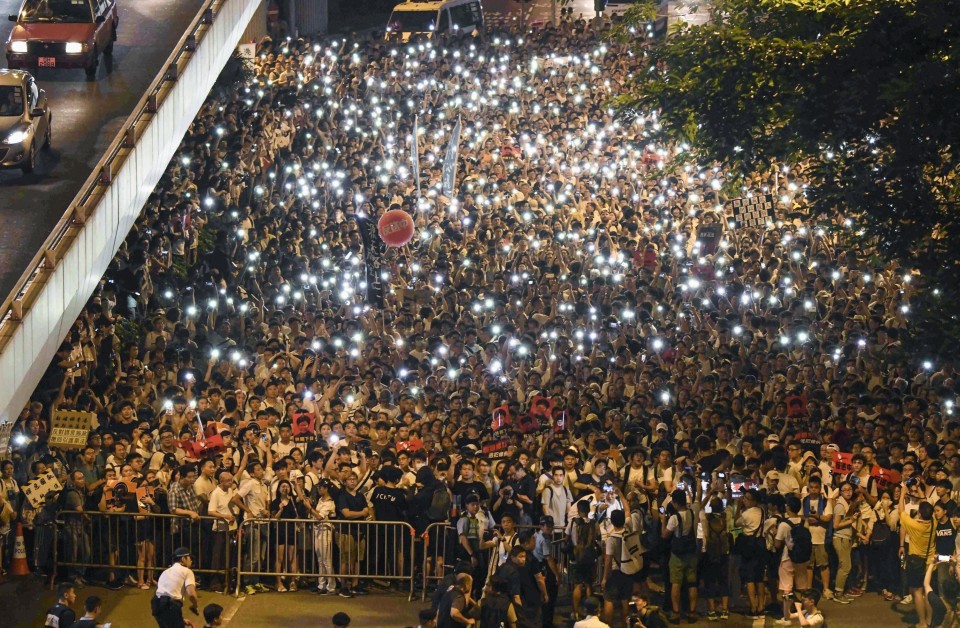 The bill has also raised concerns among dozens of countries, including Britain and the United States, as foreign citizens living in or visiting Hong Kong would also be at risk.

The government, meanwhile, has responded by making concessions such as cutting the extraditable crimes from 46 to 37 categories, and making the bill applicable only to crimes punishable by seven or more years in prison, up from three years.

Senior Chinese officials such as Vice Premier Han Zheng have recently expressed support for the extradition law changes. A former Chinese security official has revealed to Hong Kong media that 300 fugitives were known to be in the territory.

The bill's second reading is scheduled in the Legislative Council for Wednesday, with the government, which expects to secure enough votes for passage through the legislature, seeking its passage by the July summer recess.

Metal barricades were erected outside the legislature building on Friday to beef up security ahead of the legislative move.

In a show of solidarity with Hong Kong people, about 200 people also protested Sunday outside City Hall in central Los Angeles, calling for the preservation of the territory's self-rule.

People also gathered in front of the Chinese Embassy in London. Organizers say about 4,000 people marched for over 1 kilometer to the city's Hong Kong Economic and Trade Office.