At least 30 people were injured, including two seriously, after a magnitude 6.7 earthquake struck Japan's northwestern region late Tuesday, causing landslides and power outages in some areas and prompting thousands of people to evacuate from their homes.

Nineteen people were injured in Yamagata Prefecture, five in Miyagi Prefecture, four in Niigata Prefecture, and one each in Akita and Ishikawa prefectures, according to a Kyodo News tally on Wednesday. There were no reports of people missing.

Most of the evacuees had returned home by Wednesday morning, and many residents were busy cleaning up their houses and neighborhoods during a cold rain. 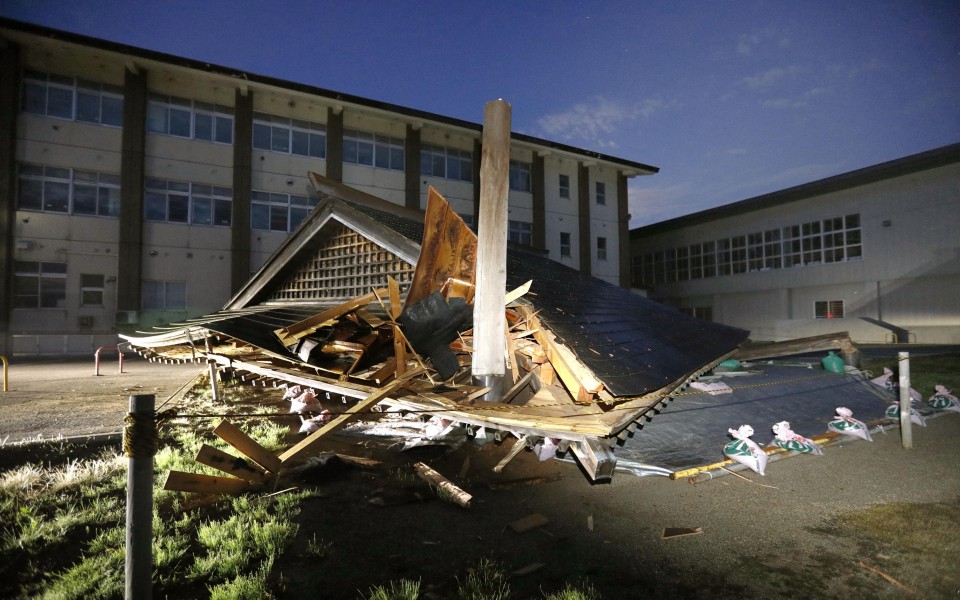 (The roof of a sumo ring is seen collapsed at an elementary school in Tsuruoka, Yamagata Prefecture.)

The Japan Meteorological Agency warned of potential collapses of buildings and more landslides as quakes of similar intensity could hit Yamagata and Niigata prefectures over the following week, with heavy rain expected in the areas on Wednesday night possibly loosening the soil.

A man in his 30s in Tsubame, Niigata Prefecture, fell and broke a bone, while a high school student in Yuzawa, Akita Prefecture, broke her ankle when she lost her balance, according to local officials.

The earthquake occurred around 10:22 p.m. at a depth of about 14 kilometers, with its epicenter located off Yamagata in the Sea of Japan, according to the meteorological agency. A tsunami warning was issued but lifted hours later.

The quake registered upper 6 on the Japanese seismic intensity scale of 7 in Murakami in Niigata. A 10-centimeter tsunami was observed in the city of Niigata with smaller ones in other locations including Sakata and Wajima.

"I can't believe I have experienced major quakes like this repeatedly in my life," said Riki Yokota, an 81-year-old resident of Murakami, recalling surviving a big earthquake that struck Niigata in 1964. 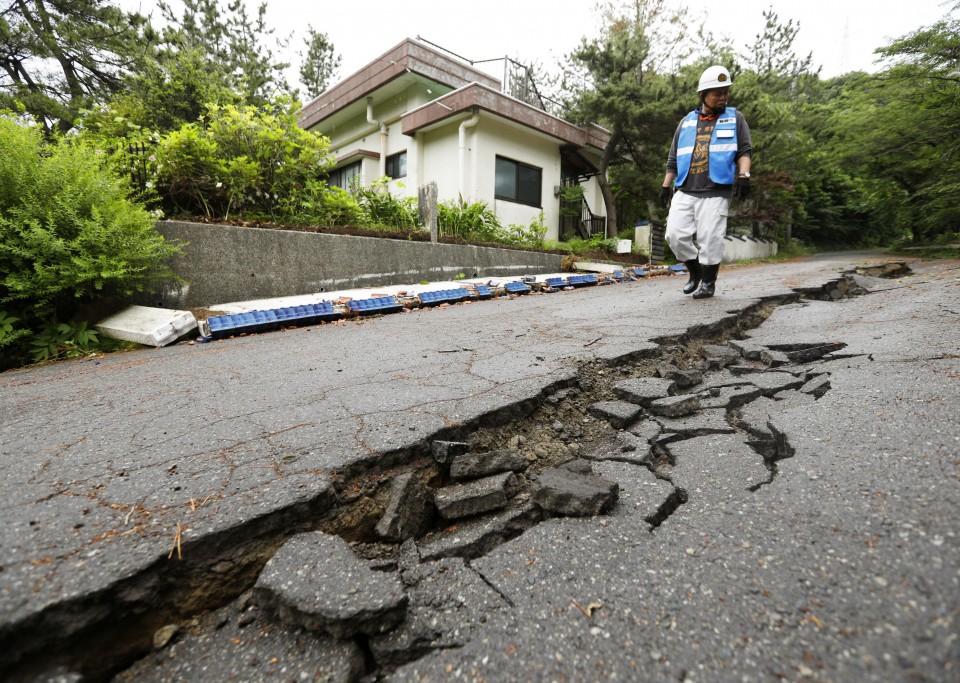 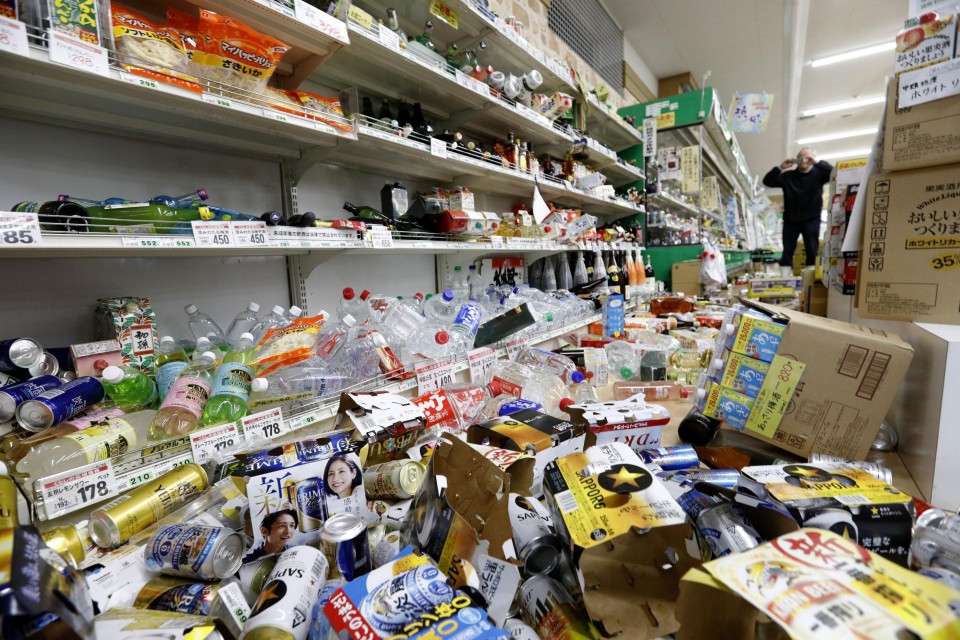 (Products are seen scattered on the floor of a supermarket store in Tsuruoka, Yamagata Prefecture.) 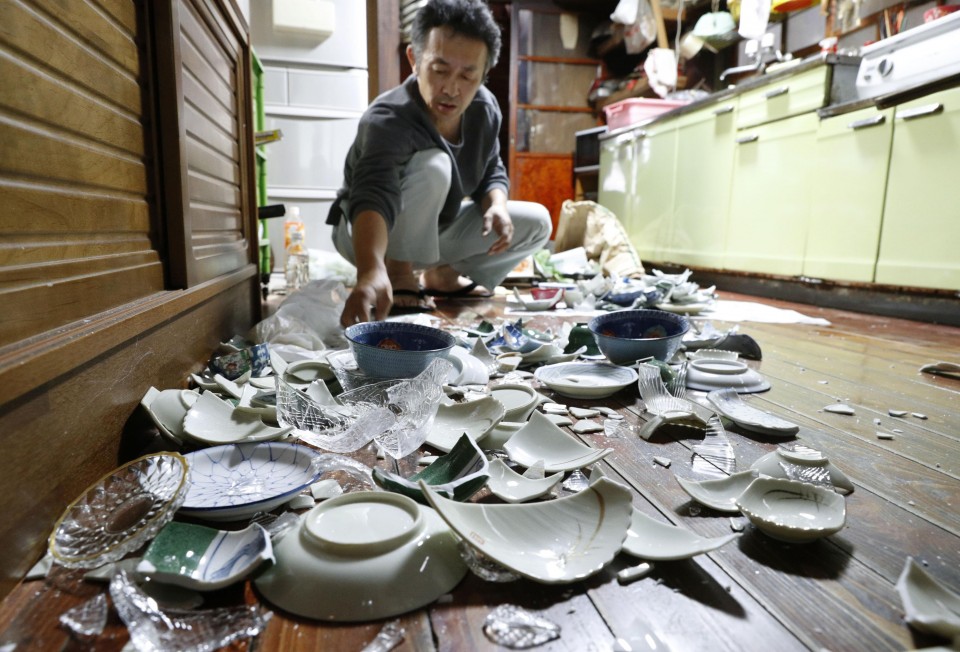 (Dishes are seen scattered on the floor of a kitchen of a house in Murakami, Niigata Prefecture.)

A strong earthquake jolted Niigata Prefecture and its vicinity in 2007 as well.

"I was so afraid I might not be able to escape" after a tsunami warning was issued, she said, after evacuating to a nearby junior high school with her daughter. She said she needs to use a walker.

At the school's gymnasium, about 200 people including elderly people and young children took shelter.

The two passengers and two crew members aboard a local train that was stopped in Murakami following the quake rushed to higher ground from the carriages near the coast.

"We were really afraid of a tsunami," said an evacuee from the train on the JR Uetsu Line who took shelter at a shrine on a hill.

"I came to this shelter after fleeing to a shrine on higher ground with my three children," said Toshiko Togashi, a 40-year-old beautician, after arriving at an evacuation center in Murakami.

"I did not lose direction because I took part in an annual emergency drill," she said.

The temblor has caused landslides and soil liquefaction in Yamagata, according to the prefectural government.

Some vehicles were trapped in mud due to liquefaction in parts of Tsuruoka in Yamagata, and the roof over a sumo ring at an elementary school in the city collapsed, according to local authorities. 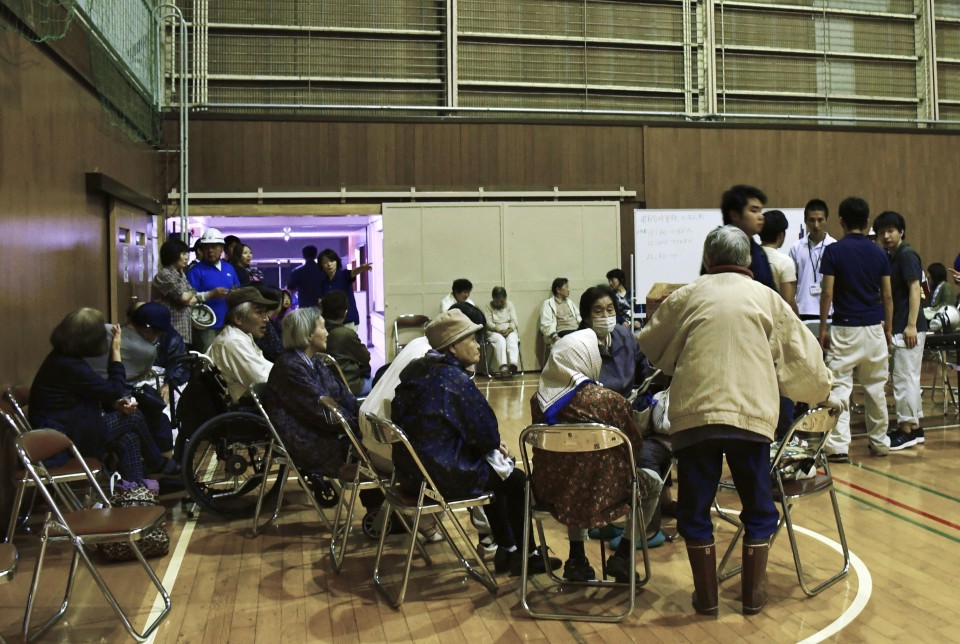 (People gather at a junior high school gymnasium, which serves as an evacuation site, in Murakami, Niigata Prefecture.) 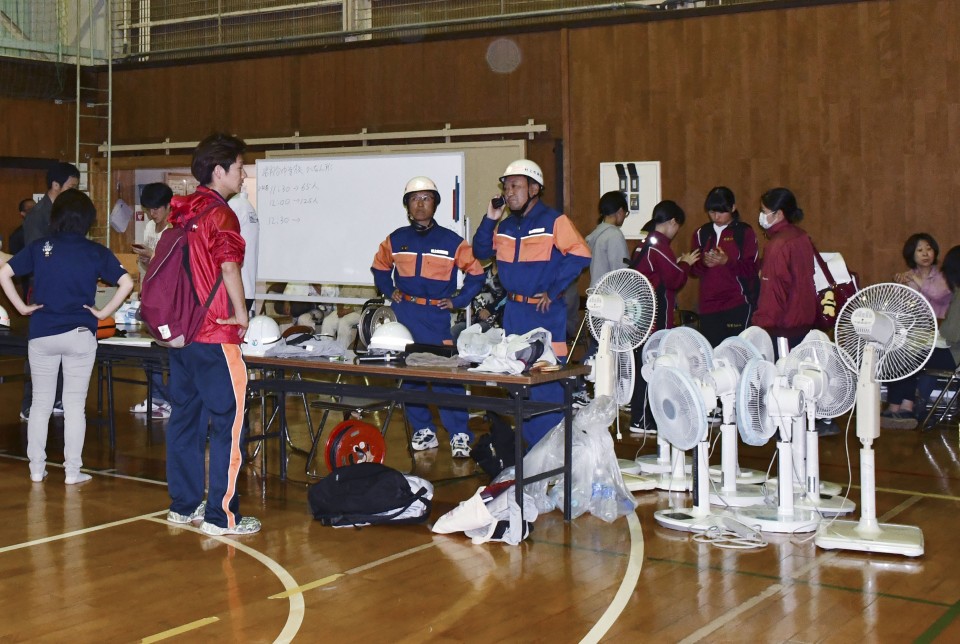 But no severe damage to buildings has been reported, with some experts pointing out that the quake, which brought short-cycle vibrations, was not the type that would cause serious structural damage.

Over 9,200 houses in Niigata and Yamagata prefectures were hit by power outages, but electricity services were restored by 6:44 a.m., according to Tohoku Electric Power Co.

Airlines said the earthquake would not affect flights to and from the region struck on Wednesday. 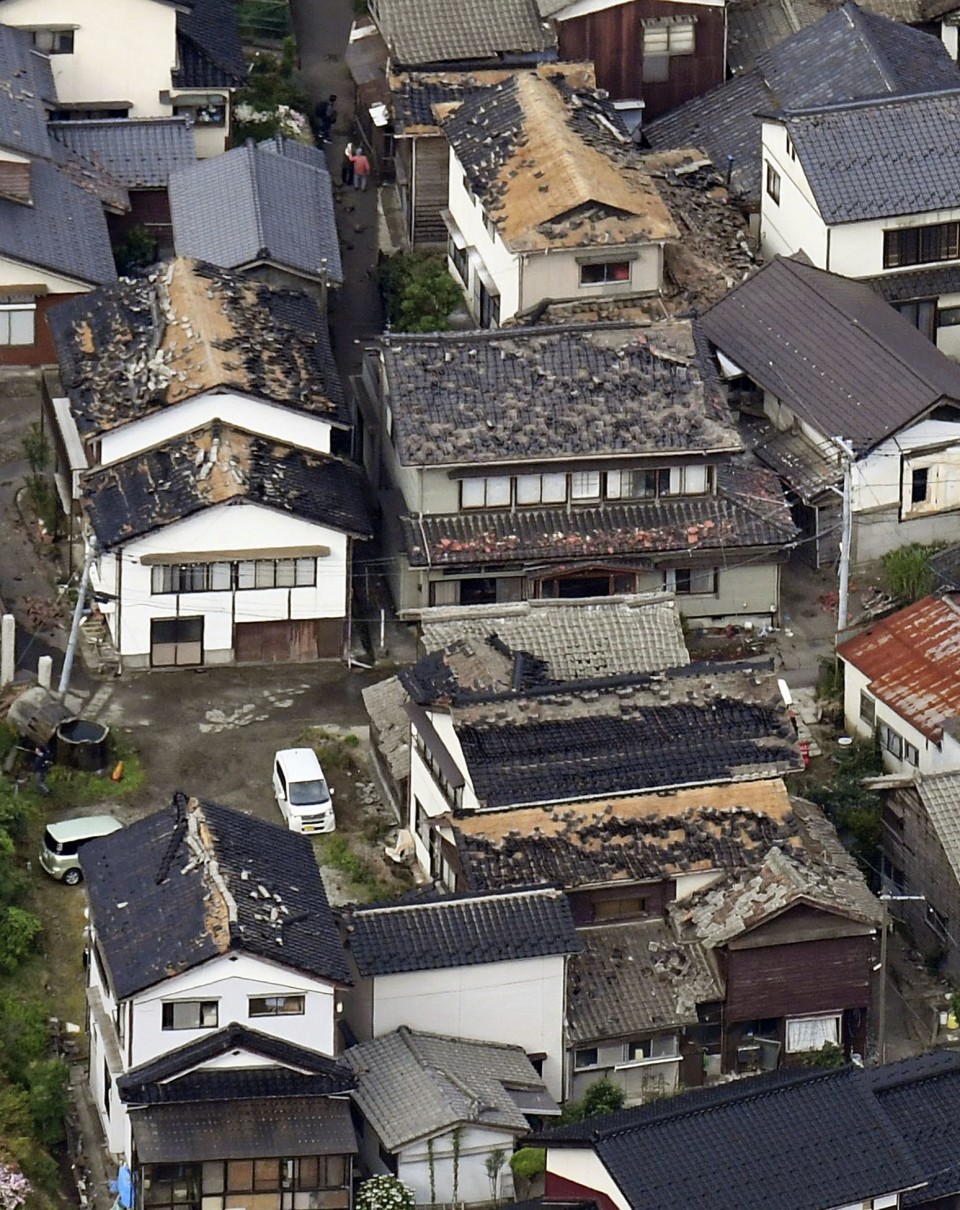 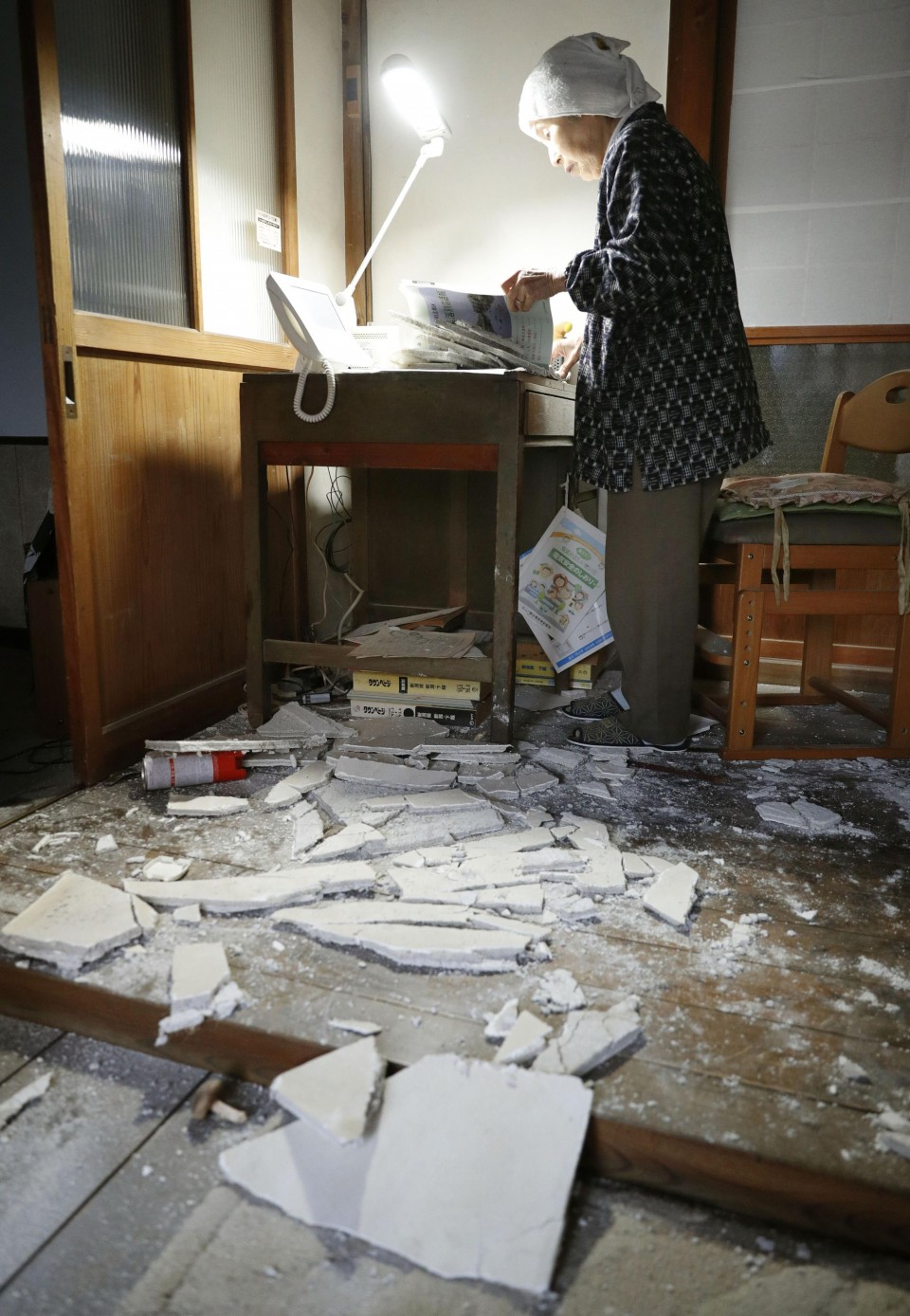 (Wall parts are seen scattered on the floor of a house in Murakami, Niigata Prefecture.) 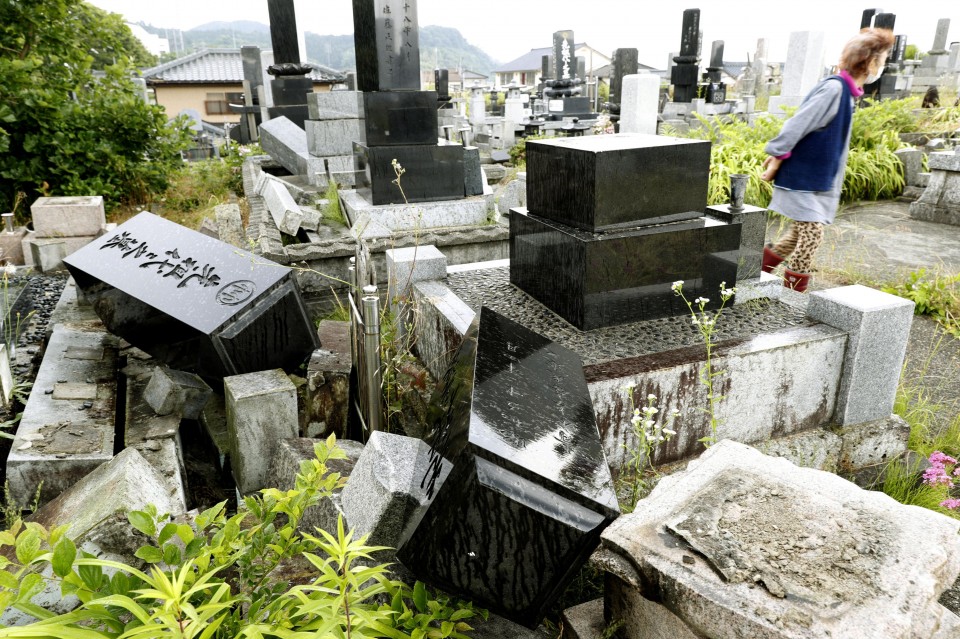 (Gravestones are seen toppled over in Murakami, Niigata Prefecture.)

High risk of powerful quake in northeastern Japan within 30 years