Britain is playing host to the largest exhibition of manga ever staged outside Japan, featuring some 70 titles by 50 artists. The exhibition traces manga's historical roots and explores its transformation into a global cultural phenomenon.

The collection's 162 items, on display in a 1,100-square-meter space, include original drawings, books, and animations of varying genres and styles.

The show incorporates sketches and comics by some of Japan's most celebrated manga artists like Osamu Tezuka, the creator of Astro Boy, and Akatsuka Fujio, the artist responsible for Eel Dog, alongside lesser-known works.

In one interactive display, visitors can browse shelves of popular titles such as Akira Toriyama's Dragonball and Eiichiro Oda's OnePiece, as well as download samples of comics onto smartphones or tablets.

Exhibition curator Nicole Coolidge Rousmaniere said the goal is for visitors to become "fluent in manga," even if it is their first encounter with the art form.

"We wanted to make it a really immersive and instructive exhibition that you can enter at different levels," Rousmaniere said in an interview with Kyodo News before the exhibition's opening. 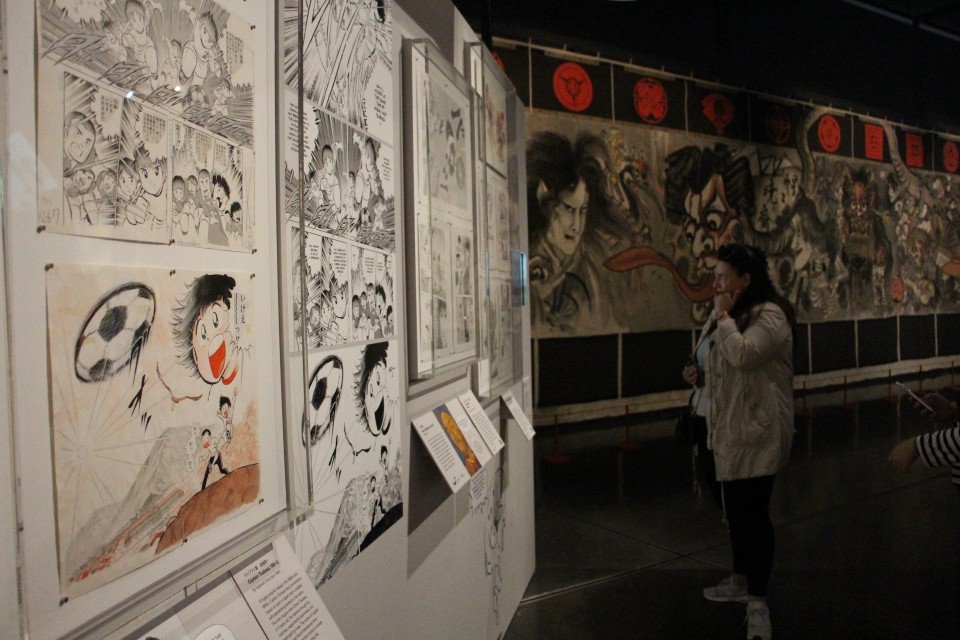 The exhibit begins with the basics of understanding manga including how to read mampu, or the onomatopoeic symbols used in many comics to convey sounds, actions and emotions.

The show then charts the development of comics in Japan, from precursor art forms and the advent of modern manga in the late 19th century to their influence on contemporary media including games and anime.

Among the earlier works thought to have preceded the rise of manga is a 17-meter theater curtain completed in 1880 by Kawanabe Kyosai, on display outside Japan for a final time.

The exhibition introduces just a few of the themes typically covered by comics, from sports and adventure to sci-fi and spirituality.

While the exhibition touches upon more adult themes such as horror and sexuality, Rousmaniere said that these are not the focus of the show, saying only "we wanted to show that side of manga exists."

Rousmaniere said she hopes to demonstrate the diversity that exists within the medium, explaining, "Whether you think you like manga or not, you find out that there is something for everybody."

This variety helps to explain manga's appeal, according to Rousmaniere. She said, "It's very subjective, and we all bring our own experiences to it. You could say the same with a novel, but because manga is a visual medium, it's somehow more immersive."

Rousmaniere conceded some people might be surprised to see such a relatively contemporary art form featured in the British Museum, usually known for its focus on world history.

However, she insisted that manga has long formed part of the museum's collection and was a natural choice for a major exhibition.

"The museum looks at objects in context and the stories we tell ourselves about our own and other peoples' histories. Manga fits in perfectly because it's visual storytelling -- it records moments, histories and feelings," Rousmaniere said.

Rousmaniere added that manga deserves greater recognition as a national art form, alongside ukiyo-e and other iconic genres. She commented, "Manga is definitely less respected than other art forms but it should be protected. It's very important that the Japanese government supports the industry by investing in it."

Nevertheless, Rousmaniere is confident manga will continue to grow in popularity, particularly with the changing nature of media. "Globally, our culture is becoming much more visual," she explained, adding, "I think manga is the visual language for the 22nd century."