Japanese filmmaker Kazuo Hara appeared this month in New York at a retrospective spanning his five-decade career, where he spoke out against proposed changes to Japan's pacifist Constitution in comments echoing the strident antiwar message of his best-known work.

Participating in a discussion at the Museum of Modern Art following a screening of his 1987 documentary "Yukiyukite Shingun" ("The Emperor's Naked Army Marches On"), Hara, who was born in the closing months of World War II, said his memories of a devastated postwar Japan gave him a sense of urgency in opposing Prime Minister Shinzo Abe's push to amend the Japanese Constitution's war-renouncing Article 9.

"For the Japanese people, war equals the Pacific War which ended in 1945, and most of the survivors are not here anymore," Hara told the crowd through an interpreter.

"So, not enough Japanese people feel the urgency of the current administration wanting to destroy the Constitution that we have, and to militarize."

Japan's ruling Liberal Democratic Party, headed by Abe, renewed its vow in February to amend Article 9 by 2020. The right-leaning LDP doubled down on its commitment at a press conference earlier this month.

"There are very few people who very urgently fear this," Hara said. "I personally really fear Japan is headed toward (becoming) a more militarized country."

At the event kicking off "Camera Obtrusa: The Action Documentaries of Kazuo Hara" -- a film series that ran at the museum from June 6 to 14 with six of Hara's films as well as an excerpt from a forthcoming project -- the director was joined on stage by his wife and producer Sachiko Kobayashi and the U.S. filmmaker Michael Moore, a longtime friend. 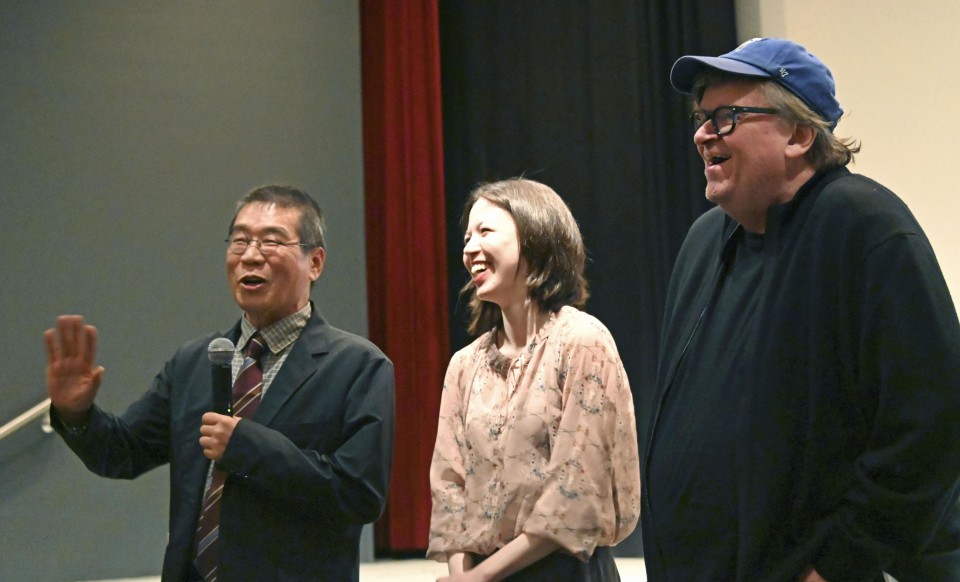 Moore, 65, recounted first seeing Hara's "Yukiyukite Shingun" while editing his own debut documentary, the 1989 film "Roger & Me" about auto industry layoffs in Michigan.

"I was in the middle of making a film which at the time was unorthodox," Moore said. "This gave me hope that you could make a documentary in ways that were not traditional."

"I encourage film students to watch this movie."

Hara's documentary follows Japanese World War II veteran Kenzo Okuzaki, who at age 62 set out to uncover the truth behind an incident that occurred within his regiment in Papua New Guinea. As the starving troops resorted to cannibalism at the end of the campaign, an officer is believed to have ordered the execution of two privates on false pretenses so as to feed others in the unit.

The embittered Okuzaki, who had spent time in prison for firing pachinko pellets at Emperor Hirohito in 1969, browbeats and sometimes physically attacks his former superiors in an effort to piece together the horrific truth from nearly 40 years earlier.

"The reaction from the audience was very good even though it is a very old film," Hara told Kyodo News after the screening of his documentary, which originally featured at the same Manhattan museum soon after its 1987 release.

The filmmaker also participated in subsequent days of the retrospective, introducing his other films and presenting a clip from "Minamata," his forthcoming movie about an industrial mercury poisoning scandal in Japan.

His work in progress, from which he showed a 10-minute excerpt, will be an extended portrayal of some of the victims of Minamata disease, a debilitating neurological illness named for the place in Japan where it arose after mercury-tainted water was dumped into a bay by a fertilizer maker in the 1950s and 1960s.

"This film is 15 years in the making, and we are editing it in Japan right now. Our final run time is eight hours," Hara said of the project set for release toward the end of the year.

The museum's weeklong retrospective included several of Hara's other critically acclaimed documentaries, dating back to his 1972 debut, "Sayonara CP" ("Goodbye CP"), about Japanese disability activists with cerebral palsy, as well as his 2005 experimental drama "Matanohi no Chika" ("The Many Faces of Chika").

"At a time when human rights, democracy and the environment are all under existential threat, Kazuo Hara dares to shake us out of our complacency and criminal indifference," Joshua Siegel, the museum's film curator, told Kyodo News.

"The world cries out for more filmmakers like him."