Newcomer Koji Miyoshi scored in both halves for Japan as Hajime Moriyasu's young side matched Uruguay in an entertaining 2-2 draw Thursday at the Copa America in Brazil.

Luis Suarez equalized from the penalty spot after Japan took a surprise 1-0 lead, while Jose Gimenez leveled the scores at 2-2 following Miyoshi's second goal at Porto Alegre's Arena do Gremio.

After opening their Group C campaign with a 4-0 loss to Chile, Japan gave a much-improved performance against the 15-time South American champions, who won their previous match against Ecuador 4-0.

Moriyasu made six changes to his lineup comprised largely of young players in the picture for next year's Tokyo Olympic Games.

Veteran goalkeeper Eiji Kawashima made his first start of the tournament, while Real Madrid acquisition Takefusa Kubo moved to the bench, eventually entering as a late substitute for man-of-the-match Miyoshi. 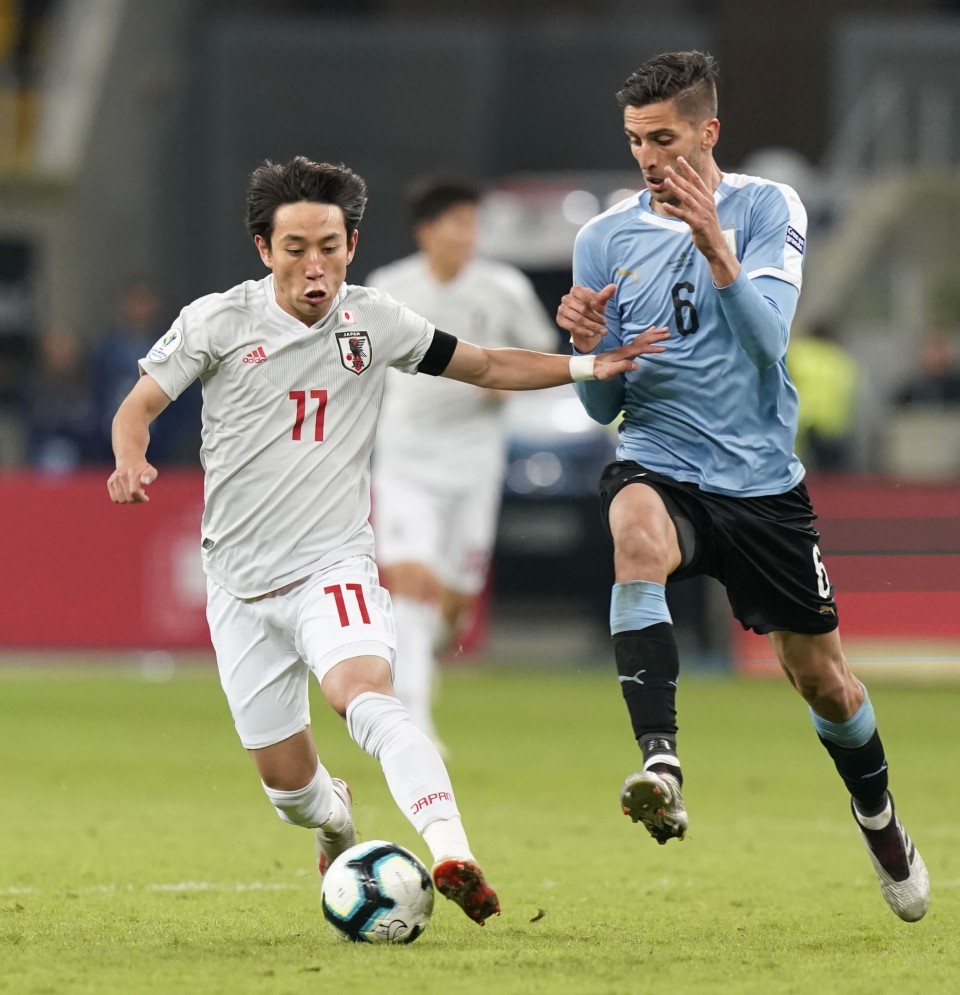 Uruguay displayed their attacking threat early, quickly generating a shot for Suarez off a length-of-the-field counter following a Japan corner.

Twenty-two-year-old Yokohama F Marinos midfielder Miyoshi opened his international account with a superb finish in the 25th minute, running onto a long ball from Gaku Shibasaki before beating keeper Fernando Muslera from the right of the area.

"I thought I had a chance to score, as I received the ball in space and saw I had room in front of me. I was glad to put my shot on target," Miyoshi said.

The advantage was short-lived, with Suarez leveling in the 32nd minute following the awarding of a controversial penalty by the video assistant referee.

Center-back Naomichi Ueda was deemed to have fouled Edinson Cavani after the Paris Saint-Germain forward went to ground theatrically inside the area. Replays appeared to show Cavani's foot making contact with Ueda following a shot by the Uruguayan.

Japan saw their own appeal for a penalty denied after Gimenez appeared to foul Shoya Nakajima just inside the box.

Kawashima prevented Japan from going behind early in the second half, rushing off his line to block Cavani on the breakaway at the edge of the box.

Miyoshi netted his brace in the 59th minute, scoring from close range after Muslera deflected a cross from Daiki Sugioka into his path.

Once again, Japan's time in front was brief. Atletico Madrid defender Gimenez equalized with a header in the 66th minute after beating Takehiro Tomiyasu to a corner kick.

Japan survived a number of close calls as Uruguay turned up the pressure late in search of a winner.

Moriyasu praised his team for their effort and execution against the side ranked No. 8 in the world.

"They wanted to win and that showed in the way they played. They worked hard and went in for challenges. The (Uruguay goals) were unfortunate, but overall it was a great effort," Moriyasu said.

"If we win our next game, we'll have a good chance to advance from the group."

Miyoshi said securing the point against Uruguay was crucial to Japan's hopes of advancing at the June 14-July 7 tournament, where they are competing as an invited nation.

"We were able to play the way we envisioned. As an individual player, I was able to score, while we got the point (as a team)," said the attacking midfielder, who debuted against Chile.

The result was another strong showing against Uruguay for Japan, who won 4-3 when the teams met previously in a friendly at Saitama Stadium last October.

Japan will play their final group game against Ecuador in Mineirao on Monday.