Japan scrambles for information on ship attacks near Strait of Hormuz

Japan sought further information Friday about the attacks on two oil tankers, one of them operated by a Tokyo-based company, near the Strait of Hormuz the previous day.

"We have not learned who carried out the attacks and how," transport minister Keiichi Ishii told a press conference.

The attacks on Thursday came during Prime Minister Shinzo Abe's landmark trip to Iran for talks with the Middle East country's leaders aimed at easing tensions between Tehran and Washington.

The United States, Japan's security ally, claims Iran is responsible for the attacks near the strategically important sea lane, with U.S. Secretary of State Mike Pompeo going so far as to say Iran "insulted Japan" by attacking the Kokuka Courageous, operated by Kokuka Sangyo Co.

The tanker was carrying 25,000 tons of methanol from Saudi Arabia to Singapore. All 21 Filipino crew members escaped in life rafts and were rescued by a ship heading to the United Arab Emirates.

The U.S. military released Thursday a monochrome video that purportedly shows an Iranian Islamic Revolutionary Guard Corps patrol boat pulling up alongside the stricken tanker and a dozen crew members can be seen removing an unexploded limpet mine from it. The United States says the footage is proof that Iran attacked the two oil tankers.

Japanese Foreign Minister Taro Kono held talks with Pompeo but refrained from elaborating on what they discussed at a press conference held later.

One Japanese government official said it is too early to conclude what happened since Japan has "no confirmation yet as to who carried out (the attack) or what their intentions were." 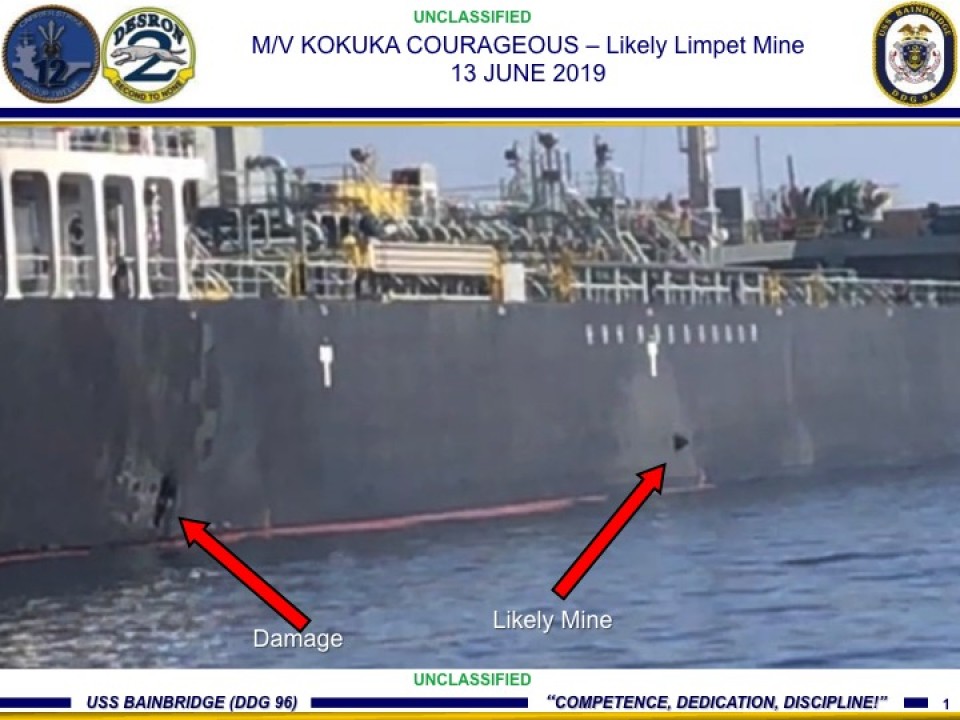 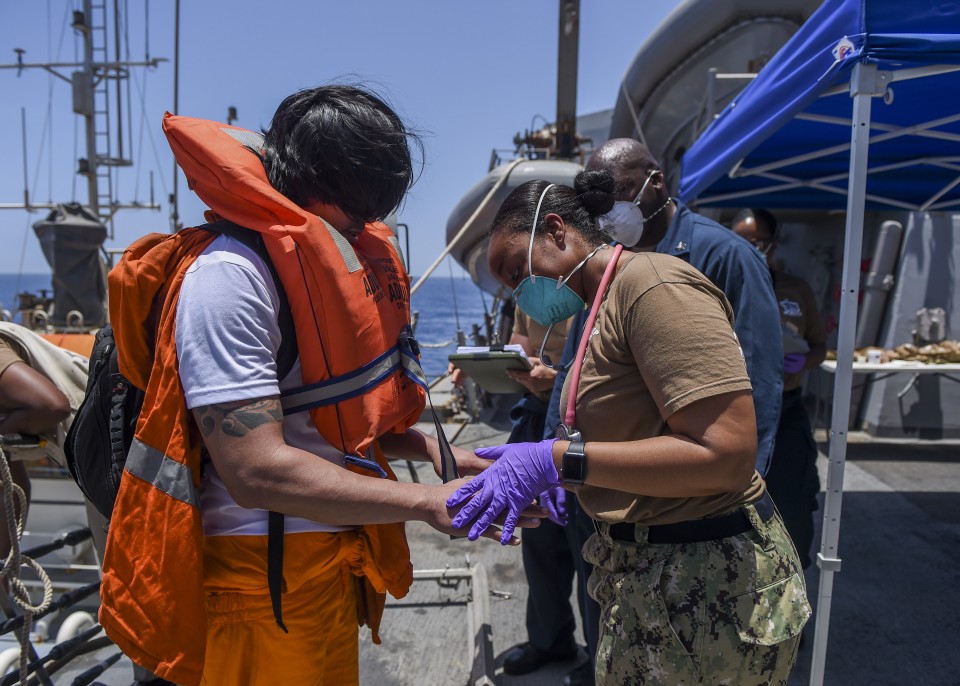 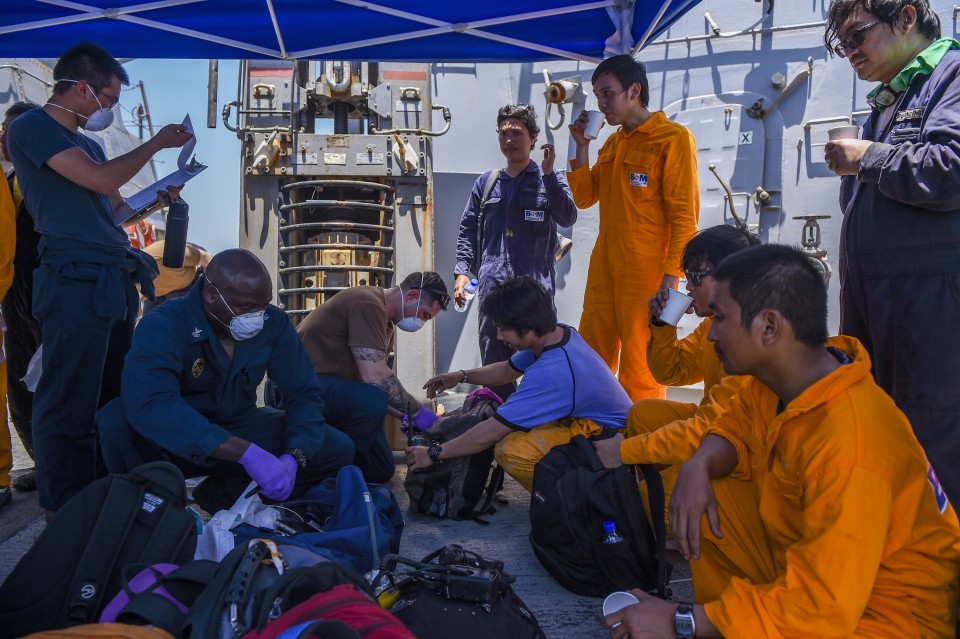 Ishii, who is in charge of maritime matters, also said it remains unknown whether the incident is linked to Abe's Iran visit.

Yutaka Katada, president of Kokuka Sangyo, told a press conference the tanker was attacked twice and some of its crew members have said they "witnessed a flying object" at the moment of the second attack, suggesting the vessel was hit by some kind of artillery shells, not by a torpedo or mine.

Katada said it is unlikely that the attacker was aware the tanker was a Japanese vessel, saying the ship was carrying a Panamanian flag.

The tanker is currently being towed to the UAE, he said.

It was carrying 75,000 tons of naphtha from the UAE and was scheduled to arrive in Kaohsiung, southern Taiwan, at the beginning of next month, according to a statement released by the company on Thursday.

The attacks took place near the Strait of Hormuz, a key corridor through which a third of all oil traded by sea passes, and pushed up crude oil prices amid fears about supply disruptions.

Japanese Economy, Trade and Industry Minister Hiroshige Seko said, "Although there will be no problem with stable supply of energy, we will continue to monitor the relevant information." 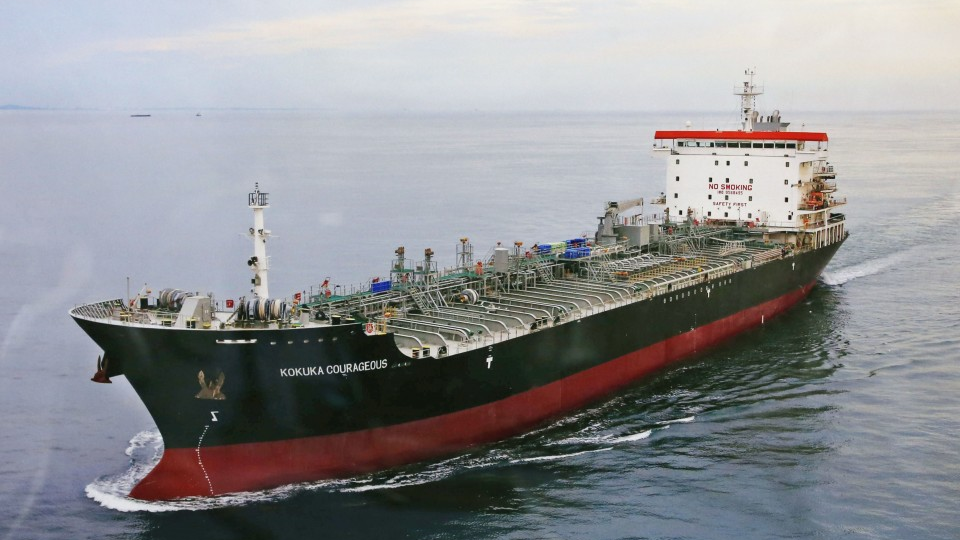