Following the mass shooting at Marjory Stoneman Douglas High School in Parkland, Florida, that claimed 17 lives in early 2018, Japanese filmmaker Emily Taguchi and her team spent months with members of the grieving community, documenting their recovery and activism in the wake of devastating gun violence.

"After Parkland," a 90-minute documentary co-directed by Taguchi and Jake Lefferman, premiered last month at New York's Tribeca Film Festival. It chronicles a heart-wrenching journey in which student survivors and mourning families begin to resume their lives in the absence of loved ones, with many also taking up a national campaign for stricter gun laws.

"(We) wanted to shine a light on how families rebuild and find meaning after a horrific and senseless event, examining the community's experience through a more human perspective," Taguchi told Kyodo News about the film.

A Tokyo native who studied at Tufts University in Massachusetts and currently lives in New York, Taguchi covered U.S. mass shootings as a producer for the ABC News program "Nightline." She and her colleague Lefferman took on their debut feature-length documentary, in part, to bear witness to the emotional journeys that take place after the news cycle has moved on.

The film captures the deeply personal process of grieving as well as the search for ways to prevent school shootings, an especially distressing question in a country where more than 300 mass shooting incidents have occurred each year since 2015, according to data compiled by Washington-based research group Gun Violence Archive. 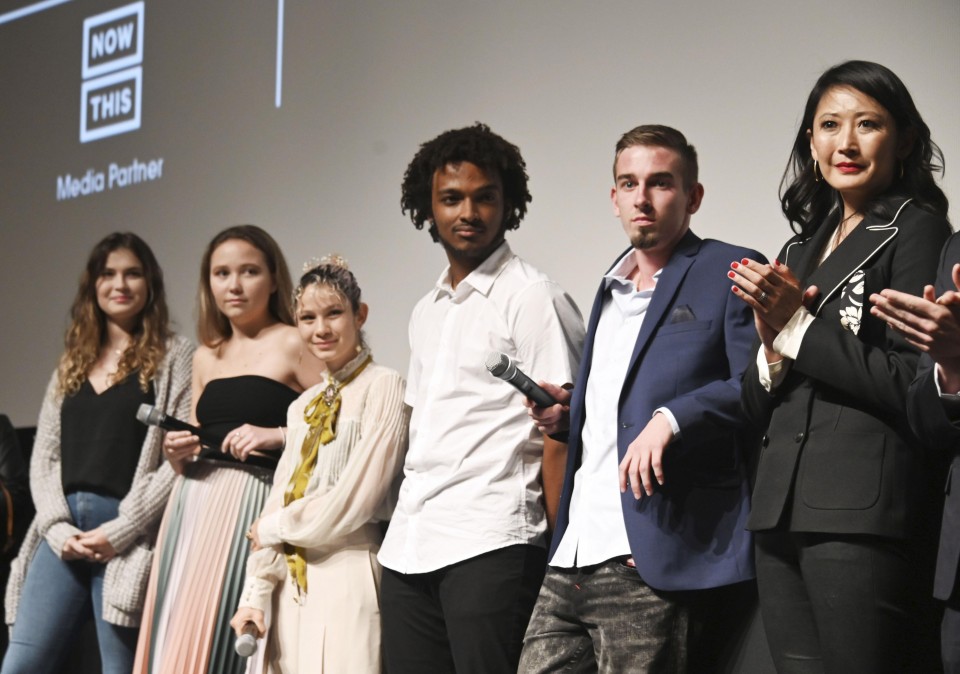 (Emily Taguchi (R) and the students)

Among the parents featured in the film are Manuel and Patricia Oliver, whose 17-year-old son Joaquin died in the shooting, and Andrew Pollack who lost his 18-year-old daughter Meadow.

The Olivers established a nonprofit called Change the Ref to advocate for gun reform in Joaquin's memory, while Pollack has been adamant about reinforcing school security before tackling any legislative agenda.

Several students are also central figures in the documentary, including Joaquin's girlfriend Victoria Gonzalez and his best friend Dillon McCooty, as well as David Hogg and others who became household names as the protest movement led by Marjory Stoneman Douglas students rose to national prominence.

David's younger sister Lauren Hogg, who describes herself as more of a behind-the-scenes person than her brother, joined a group of fellow Parkland survivors at the Tribeca premiere. The students, who were given a standing ovation after the emotional film ended, fielded questions from the audience.

"I really wanted the festival premiere to be a positive experience, and I feel it did indeed provide another forum to share their stories in a very public way," Taguchi said.

The discussion centered on the next U.S. presidential election and how to create social change through political organizing. Lauren Hogg shared a hopeful outlook with the audience based on her cross-country travels with the student-led group March for Our Lives last summer, saying the movement's efforts have registered some 200,000 voters. 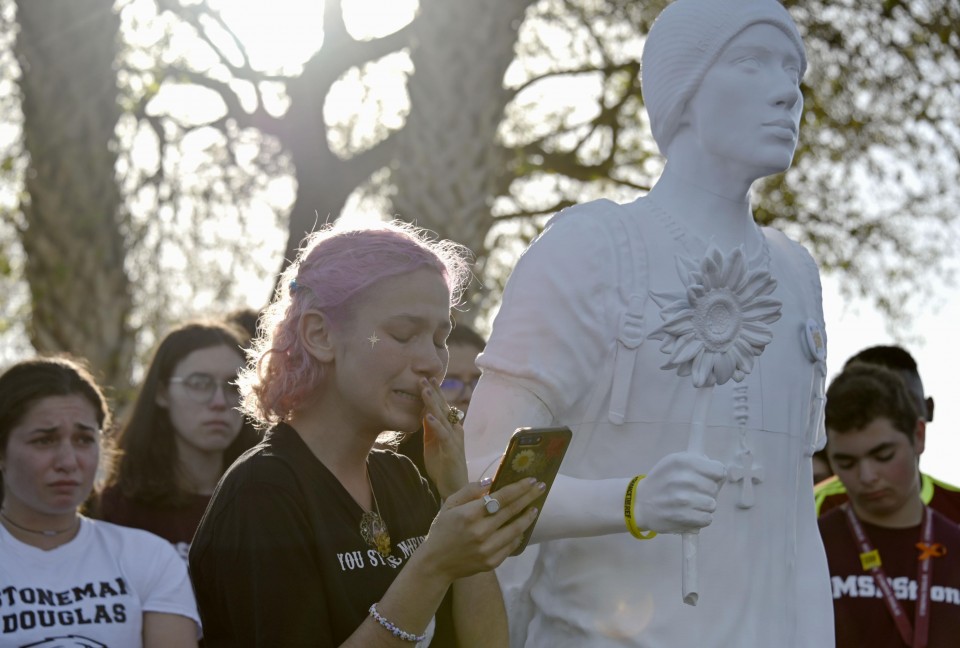 (Photo taken in front of a high school in Parkland, Florida, on Feb. 14, 2019, shows Victoria Gonzalez (C) reading a poem next to the statue of her late boyfriend Joaquin Oliver who was killed in a school shooting the previous year.)

"By the next presidential election, by the next midterm election, those kids are going to be the same kids that instead of marching out of school they are going to be marching to the ballot boxes and thinking of gun violence," she said, referring to school walkout protests that have occurred around the country since the Parkland shooting.

About 20 survivors of the Feb. 14, 2018 shooting, which killed 14 students and three staff members at the South Florida high school and left 17 others wounded, founded the March for Our Lives movement.

With support from national gun safety organizations and celebrities including George Clooney, Oprah Winfrey, and Steven Spielberg, the group staged a massive day of protest in the nation's capital about a month after the tragedy.

"When the Parkland shooting took place, the students there vowed to never let their story fade from the spotlight," Taguchi said.

Since the event, which many of the grieving students in the film are seen attending, March for Our Lives has grown into a network of student-led chapters across the country, united by policy goals such as funding for gun violence research, universal background checks for gun purchases and the banning of high-capacity magazines often used in mass shootings.

"After Parkland," which had its international premiere in May at the Hot Docs Film Festival in Toronto, will also screen at the AFI Docs festival in Washington, in late June ahead of possible wider distribution.