A special edition train designed for the upcoming Rugby World Cup was unveiled to reporters at Kamaishi Station in Iwate Prefecture on Tuesday in the build-up to the tournament kicking off across Japan in September.

The train, operated by Sanriku Railway Co. and dubbed the "Scrum Iwate Fifteen," features 35 local PR mascot characters from within Iwate Prefecture wearing the red and white stripes of Japan's national rugby team, the Brave Blossoms. Kamaishi is one of the World Cup's 12 host cities.

A tourist from Tochigi Prefecture to the south said that while she had only just learned of the train during her travels, she thinks it will "get people excited" for Asia's first Rugby World Cup. 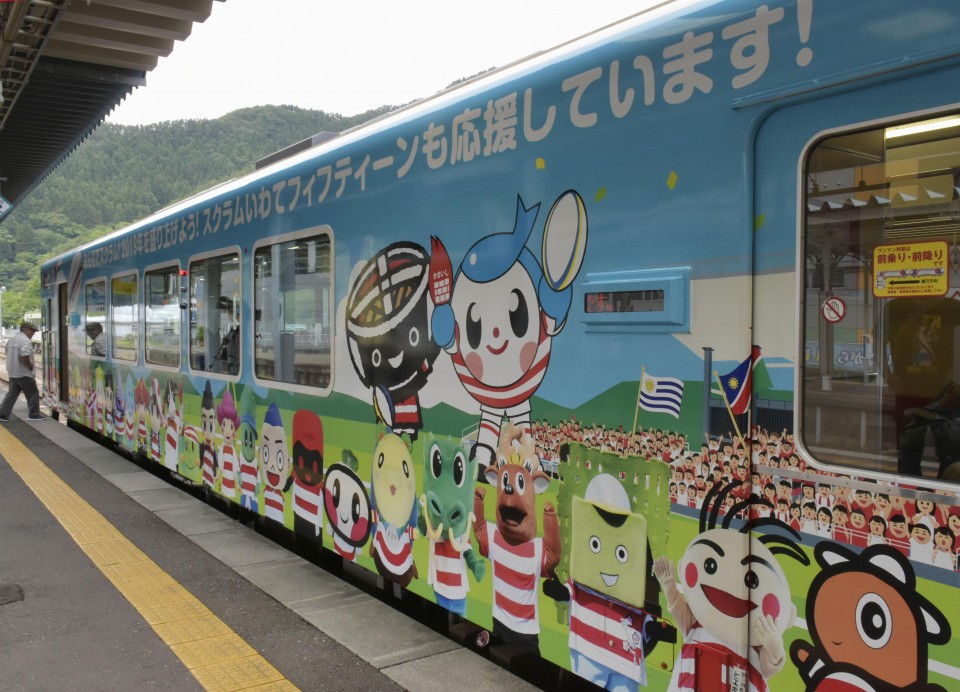 The head of World Cup promotion for the city of Kamaishi, Takashi Masaki, said he hopes the train "rouses even more excitement for the Rugby World Cup all over Iwate."

This year's tournament, held from Sept. 20 to Nov. 2, will see 20 teams playing across 12 cities stretching from Japan's northern main island of Hokkaido to Kyushu in the southwest.

Kamaishi, a city of approximately 33,000 residents, hopes to use the World Cup to showcase its recovery from the earthquake and tsunami disaster that devastated the city in 2011.

The newly built Kamaishi Recovery Memorial Stadium, which opened last August, will host two group-stage matches during the World Cup -- Fiji vs Uruguay on Sept. 25 and Namibia vs Canada on Oct. 13.

As part of their World Cup warm-up, the Brave Blossoms will face Fiji in Kamaishi on July 27 in their first match of the Pacific Nations Cup.