Japanese Defense Minister Takeshi Iwaya on Saturday asked his South Korean counterpart to prevent a recurrence of a radar lock-on incident that occurred late last year, expressing eagerness to end talks about the issue that has worsened ties between the two nations.

"I believe there is only one truth" but Japan and South Korea "should take one step further based on a future-oriented viewpoint," Iwaya told reporters after he spoke with Jeong Kyeong Doo for more than 30 minutes in Singapore.

Jeong again rebuffed Japan's allegation of the radar lock-on. The minister, however, said that he and Iwaya exchanged views "in a candid manner" and that Seoul will make active efforts to improve relations with Tokyo.

The defense chiefs of the two countries held in-depth talks for the first time since a South Korean destroyer allegedly locked its fire-control radar on a Japanese patrol plane in December 2018.

Iwaya and Jeong met at a lunch on the occasion of the Asia Security Summit, known as the Shangri-La Dialogue. They shook hands and smiled, although Japan-South Korea ties have been deteriorating sharply over contentious history and defense issues. 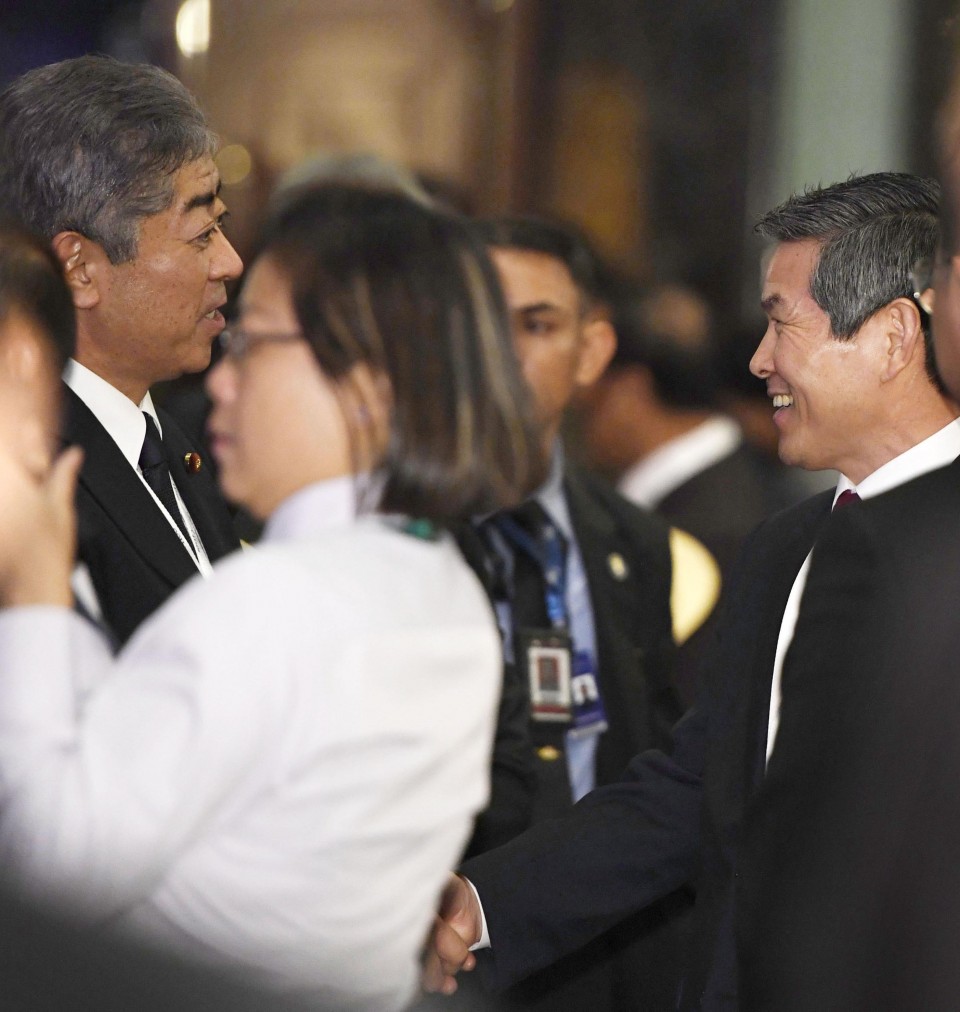 As tensions on the Korean Peninsula have been rekindled following the rupture of the second U.S.-North Korea summit in Hanoi in late February, Tokyo and Seoul may be leaning toward improving bilateral relations, diplomatic sources say.

Iwaya and Jeong also chatted together on Friday night at the venue of the ceremony of the three-day meeting through Sunday.

Strains between Tokyo and Seoul have been running high especially after the radar lock-on incident. In January, Japan concluded that South Korea's denial of the alleged radar lock was "baseless" and has cut off talks on the incident since then.

The two nations have also been engaged in several disputes based on differing interpretations of thorny issues related to history, such as South Korea's court orders to pay compensation for work done during Japan's colonial rule of the peninsula.

A series of court rulings in South Korea have ordered Japanese companies to compensate for what Seoul calls forced labor during Japan's 1910-1945 colonization of the Korean Peninsula.

Tokyo has argued that the issue of wartime compensation was resolved by a 1965 treaty that established diplomatic ties between the two countries, under which Japan provided South Korea with $500 million in financial aid.

With bilateral relations showing little sign of improving, North Korea fired projectiles that appeared to be short-range ballistic missiles on May 4 and 9, fanning fears about peace and stability in the region.

In the wake of Pyongyang's missile launches, Tokyo and Seoul may have started to consider the possibility of talks, the sources said.