A group of men jam their feet into high-heeled shoes and walk back and forth, some falteringly, others with unlikely confidence. Some women watch on, gauging the men's reactions while sympathizing with each other's stories about wearing the torture devices masquerading as fashion.

They were all participants in a recent event in Tokyo held to highlight the plight of many women -- the forced wearing of heels in the workplace -- in an extension of the #KuToo online movement.

The social media hashtag references the Japanese words for shoes, "kutsu," and pain, "kutsuu," with a nod to the worldwide #MeToo movement which has rallied awareness about the scourge of sexual harassment and violence against women.

Organizers of the event with the tag-line, "Is job-hunting in sneakers acceptable?" gave the men stilettos with 5-centimeter high heels and asked them to quite literally walk in a woman's shoes. The experience allowed the men to understand the discomfort and inconvenience that come from walking with one's heels held aloft.

"I'd be quite annoyed if someone asked me to wear these," shoemaker Jun Ito, 34, said as he put on a pair of black heels. He promptly took the shoes off after posing for a photo. "Wearing heels makes me feel unstable and my feet got sweaty," he added. 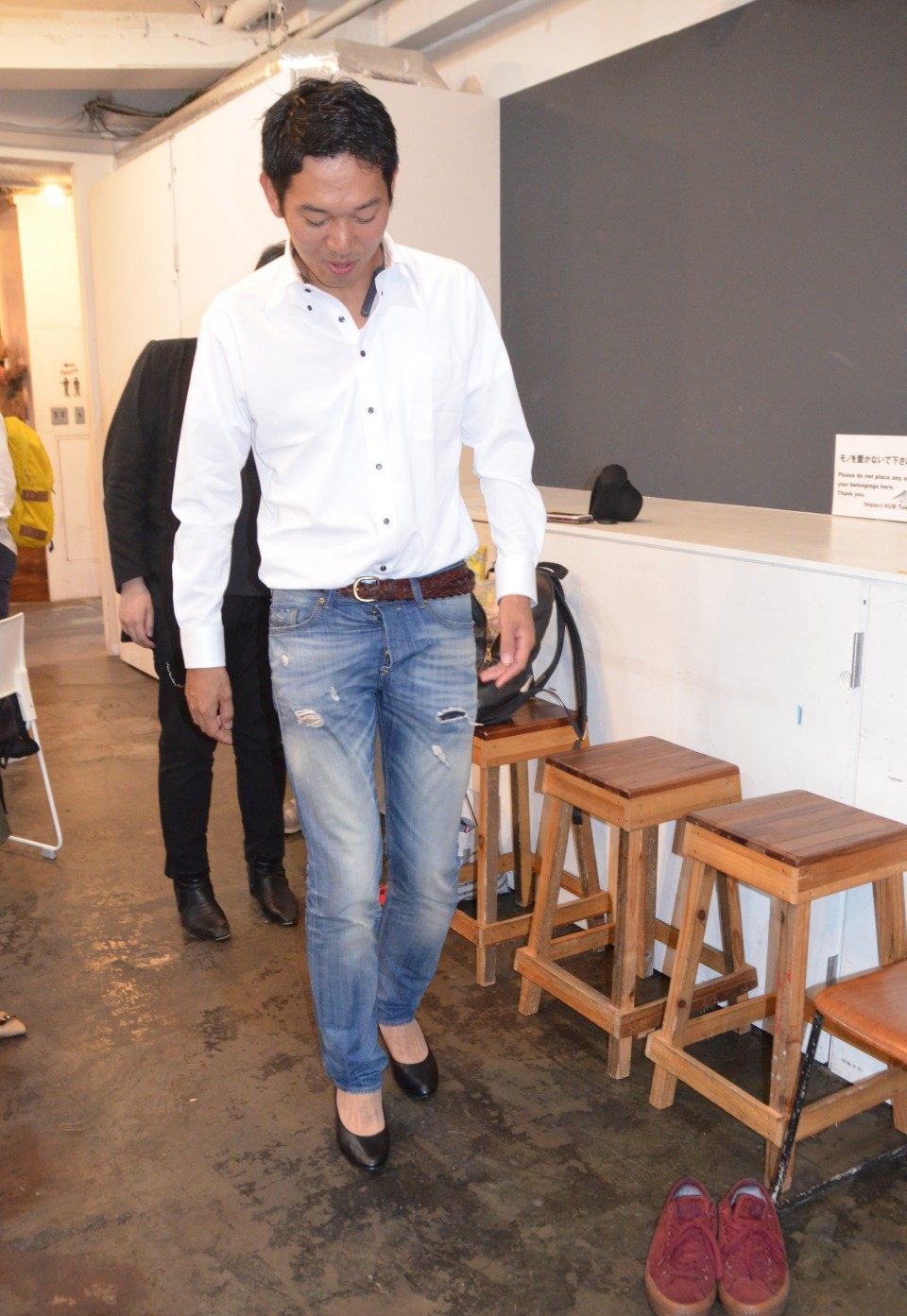 The event, organized by petition website Change.org to "reflect upon ideal working conditions from one's feet," questioned the necessity of heels in the workplace from various viewpoints as it challenged etiquette norms in Japan.

"I hope there will come a day when women don't have to wear heels in the workplace...Why do we have to injure our feet while working when men are allowed to wear flat shoes?" asked Yumi Ishikawa, 32, the creator of the #KuToo movement.

The actress and writer tweeted in January her frustration about the unfairness of having to wear heels. In her part-time job at a funeral parlor, Ishikawa worked as an usher and was on her feet for the majority of the day, often finishing her shift with bleeding pinky toes.

Regardless, the dress code at the parlor required women to wear black strapless closed-toe heels between 5- to 7-cm high.

One workday, she noticed that her male colleague was wearing light flat shoes. Annoyed, Ishikawa casually tweeted about the disparity of the dress code, and to her surprise received over 67,000 likes and nearly 30,000 retweets. Encouraged by the replies, she created the hashtag #KuToo.

"People tend to feel they shouldn't make a fuss, but this movement started from a complaint I made," Ishikawa said at the gathering. "If you think something isn't right, then I don't think it's such a bad thing to talk about it."

What began as a rant soon became a trend on the platform and quickly garnered enough support that an online petition questioning gender-based dress codes was born, with a focus on women and heels. Her petition against forced heel wearing in the workplace now has over 18,700 signatures.

"I realized that it's a problem so many people sympathize with," she said.

Some supporters of the campaign tweeted that forcing women to wear high heels in earthquake-prone Japan can even pose a threat to their lives.

Countries around the world have also been cracking down on policies on workplace dress codes in recent years.

In Britain, professional services firm PricewaterhouseCoopers became the target of ridicule after receptionist Nicola Thorp was sent home without pay for not wearing the required 5- to 10-cm high heels in December 2015.

Dissatisfied, Thorp began an online petition that garnered over 150,000 signatures, subsequently triggering a debate in parliament.

Although the British government concluded the existing law was adequate in banning gender-based discrimination, it published guidelines in May 2018 titled "Dress codes and sex discrimination -- what you need to know," outlining how the law could be applied in the workplace.

At the 2016 Cannes Film Festival in France, Julia Roberts and many other actresses sent photographers crazy when they walked the red carpet barefoot or in sneakers to cast light on the event's dress code. Their protest came after a number of women were barred from entering a screening for not wearing high heels the year before.

The Canadian state of British Colombia and the Philippines have also moved to ban workplaces from forcing women to wear heels, according to Shino Naito, vice senior researcher at the Japan Institute for Labor Policy and Training.

Japan has a law to prohibit gender-based discrimination in certain phases of employment such as recruitment, promotion, training and renewal of contracts, but there is no reference to dress codes, she said.

"Japan is a society where people are often hesitant to speak up. But once one person does speak out, others tend to follow," Naito said at the event.

Ishikawa says women who enjoy wearing heels, of course, have the right to continue doing so, "and even men who wish to wear heels should be permitted," she said.

She is scheduled to submit the online petition to the Health, Labor and Welfare Ministry on Monday to coincide with the start of the screening process for recruitment of new university graduates, during which many female applicants wear heels.

The petition calls on the government to tell companies to ban rules enforcing the wearing of heels.