More than 1 million people were left frustrated as the official 2020 Olympic ticketing site slowed to a crawl due to heavy traffic Thursday as the games' lottery results became available.

Though organizers refrained from specifying the exact time the lottery results would be available in order to avoid a website crash, a huge surge of web traffic during the morning commute swamped the site around 7 a.m.

The results were first made available at 2 a.m. and roughly 1.35 million people were parked on a holding page on the website for as long as three hours, according to the organizers.

Tickets allocated in the lottery must be purchased by 11:59 p.m. on July 2.

There was euphoria and disappointment as lottery participants found out the results.

Akiko Wada from Osaka who had applied for tickets for baseball, soccer and judo matches, was one of the lucky ones, winning the chance to watch a judo match in the 100-kilogram category. 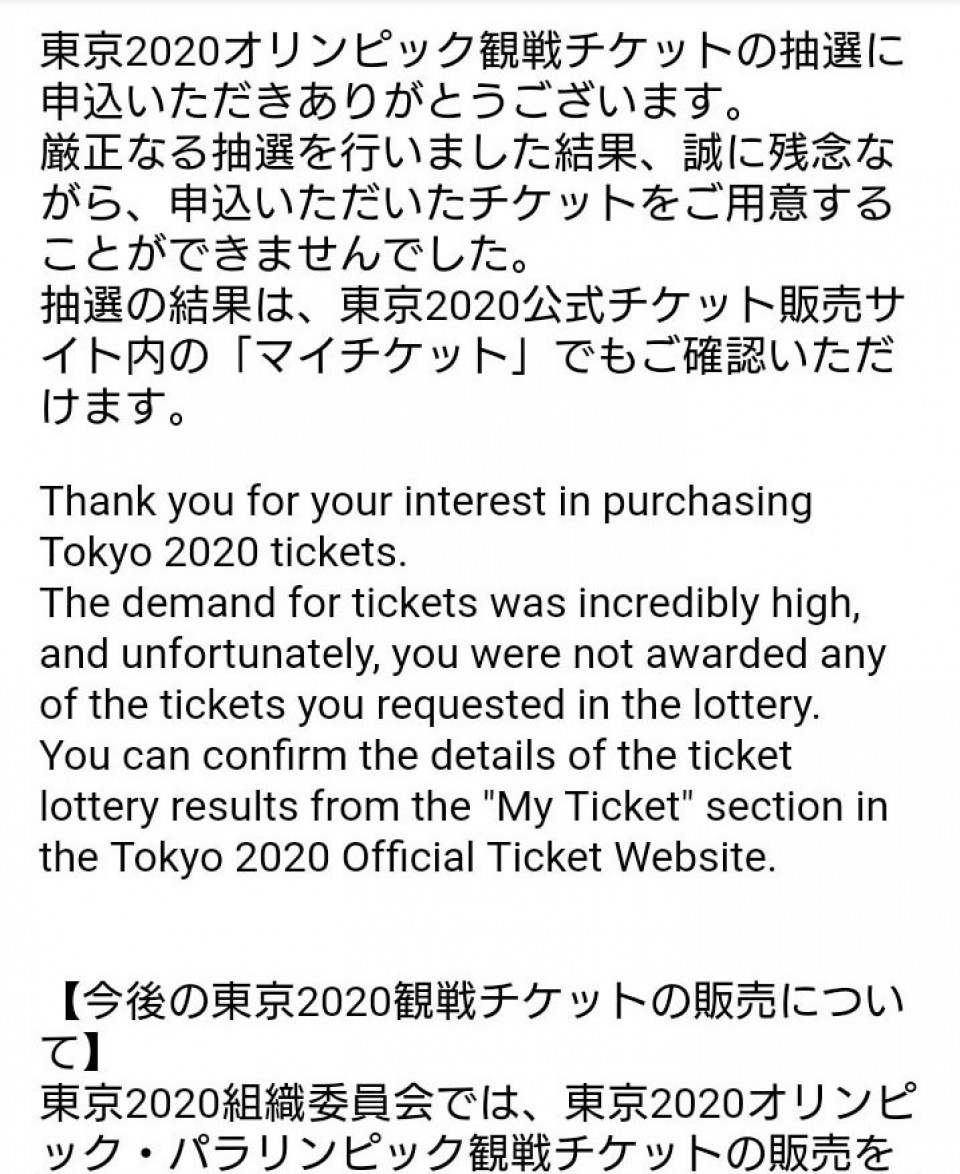 (Mail notifying the result of lottery.)

"It's an athletic sport that Japan is strong in so a Japanese athlete might win a gold medal. I am already excited with the prospect that I might see a historic moment," the 65-year-old said.

Others were not as lucky, like Kyoko Ishikawa who had repeatedly attended Olympics to cheer Japanese athletes with the late Naotoshi Yamada, nicknamed "Olympics Ojisan" (Olympics grandad), famed for attending every Summer Olympic Game since 1964. Yamada died in March.

The 49-year-old Tokyoite got nothing despite applying for 60 tickets, the maximum number, to various events including the opening ceremony and a judo match.

"Since it's costing the city a lot of money, I would have wished that city residents could win at least one ticket," she said.

The Tokyo Olympics ticketing site also experienced similar traffic-related problems on the day the lottery application period began and ended. The first phase of ticketing, where applications were made online from May 9 to May 28, is limited to residents of Japan.

More than 7.54 million people registered for an ID required to make an application.

Organizers have requested people visit the site during off-peak hours and not wait until July 2 to complete their purchase, as they expect another spike in traffic to cause similar issues. After July 2, tickets allocated via the lottery that go unpurchased will be returned to the pool for future rounds of sales.

Successful applicants must purchase all tickets allocated, or none.

Because preparations are not yet completed at many venues, specific ticket details, including seat numbers, will be determined after next spring.

Ticket sales will continue, with a first-come, first-served sales phase to start this fall. After spring of 2020, tickets will be sold at booths across Tokyo, though the number of tickets available via this means remains undisclosed.

People living outside Japan will be able to buy tickets through authorized resellers in their respective countries.