The designs of tickets for the 2019 Rugby World Cup were unveiled Monday at a presentation in Tokyo ahead of the tournament's start across Japan in September.

Based on the competition's colors of blue, red and purple, the designs feature a Japanese paper motif and rugby players in action drawn with hints of traditional "mushae" warrior paintings in commemoration of the tournament being held in Asia for the first time.

Five variations were used for the 2015 World Cup in England, with four versions featuring the Webb Ellis Cup and captains who led their teams to victory at previous tournaments. Tickets for the final featured a special design showcasing former England flyhalf Jonny Wilkinson's winning drop goal in the 2003 final. 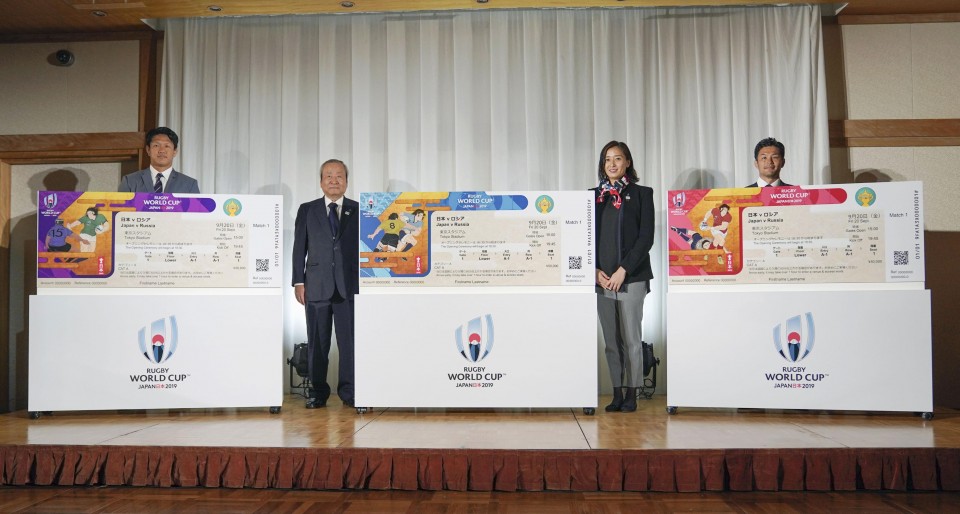 About 1.4 million, or nearly 80 percent, of the 1.8 million tickets for all 48 matches have already been sold. The current general ticket sales phase will continue until late July, with more than 300,000 expected to be sold when the next round of sales starts in August.

Also on Monday, well-wishers gathered at Shimogamo-jinja, a Shinto shrine in Kyoto, to pray for the success of the tournament. The shrine has a historical connection to rugby in Japan, as it marks the spot where a Tokyo-based Keio University student taught the sport to students of what is now Kyoto University in 1910, leading to rugby's spread throughout western Japan.

"I want this tournament to be a success with the hospitality which is typical of Japan," former Japan international and 2019 RWC ambassador Yukio Motoki said at the event. "It's really important that rugby takes root in Japan."

The Webb Ellis Cup also made an appearance as it proceeds on a three-month tour around the country.

The 2019 Rugby World Cup will see 20 teams playing across 12 cities, stretching from Japan's northern main island of Hokkaido to Kyushu in the southwest.