Contemporary Japanese artist Yoshitomo Nara, known for his paintings of a small child staring at viewers, joined a talk event Saturday to share his experience of visiting refugee camps in Jordan and called for more attention to be given to vulnerable people.

Nara, who visited Zaatari and Azraq camps in March as part of a nonprofit organization's aid activities, presented snap shots including those of smiling children, some Syrian dishes he had, and a painting he bought from an artist, and encouraged listeners to imagine being in their shoes.

"You don't necessarily have to make supporting Syrian refugees your aim," he told the audience, adding he has learned from experience that, by giving thought to people facing difficulties and starting with even small things to help them, the spirit of caring will eventually reach others.

"For me, I've come to realize that I have more ability to paint than others, so by doing that I think I could support them in some way."

The artworks of Nara, who also visited refugee camps in Afghanistan and Pakistan in 2002, often include messages of peace.

Although the visit was not intended to create new artworks, he said he was sure that the experience of meeting people full of life despite their difficult situation would be reflected in his future works.

"The experience (of the visit) helps me have a more realistic view of the life of refugees," he said.

As of June 2019, there were about 5.4 million registered Syrian refugees, according to the United Nations High Commissioner for Refugees. Many of them stay in neighboring countries such as Turkey, Lebanon and Jordan. 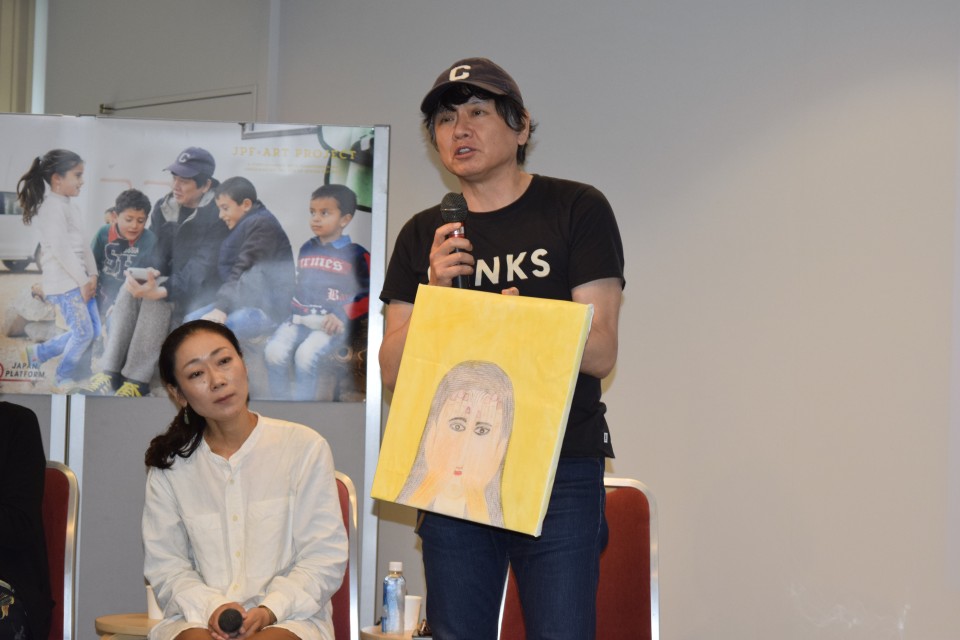 (Nara holds a painting he bought at a refugee camp)

Japan, which has maintained a strict immigration policy, has mainly accepted foreigners with high skills in such fields as medicine and law, while taking in only a tiny number of refugees.

In 2018, only 42 out of 10,493 asylum seekers were granted refugee status, according to the Justice Ministry.

Nara's nine-day trip through March 9 was planned by Japan Platform, an organization that coordinates emergency humanitarian assistance by various actors including NGOs and the government to raise awareness of the situations of refugees.