Raised by Indonesian Muslim parents in Tokyo, Aufa Yazid and Ghufron Yazid, two siblings in their 20s, bring a cross-cultural perspective to fashion and art while adhering to their faith.

Wearing a hijab sets Aufa apart from the crowd in Japan, where Muslims are a minority, but what makes the 24-year-old freelance fashion creator really stand out is her style.

Aufa is part of the growing modest fashion movement in which Muslim women seek to express themselves stylishly while still adhering to Islamic requirements to cover up.

"Although not talked about much, modest fashion is spreading in Japan," Aufa told Kyodo News in a recent interview. In any case, she added, Japan has a tradition of modest female attire in the form of the kimono, and she also pointed to current fashion trends that honor stylish loose-fitting garments. "I want my work to be seen as art and to inspire others," she said.

Around the world, more high-end brands are entering the modest fashion sector. They include Dolce & Gabbana, which launched a collection of hijabs and abayas in 2016, and Burberry, which released its Ramadan collection. In Japan, casual fashion chain Uniqlo now sells hijabs.

Muslim women were estimated to have spent $44 billion (4.85 trillion yen) on modest fashion in 2015, according to a Thomson Reuters' economic report. Revenues are expected to reach $368 billion by 2021, the report says.

Aufa has around 69,000 Instagram followers. She posts editorial selfies, varying from an edgy street style to kimono fashions, all the while giving her take on Muslim attire. 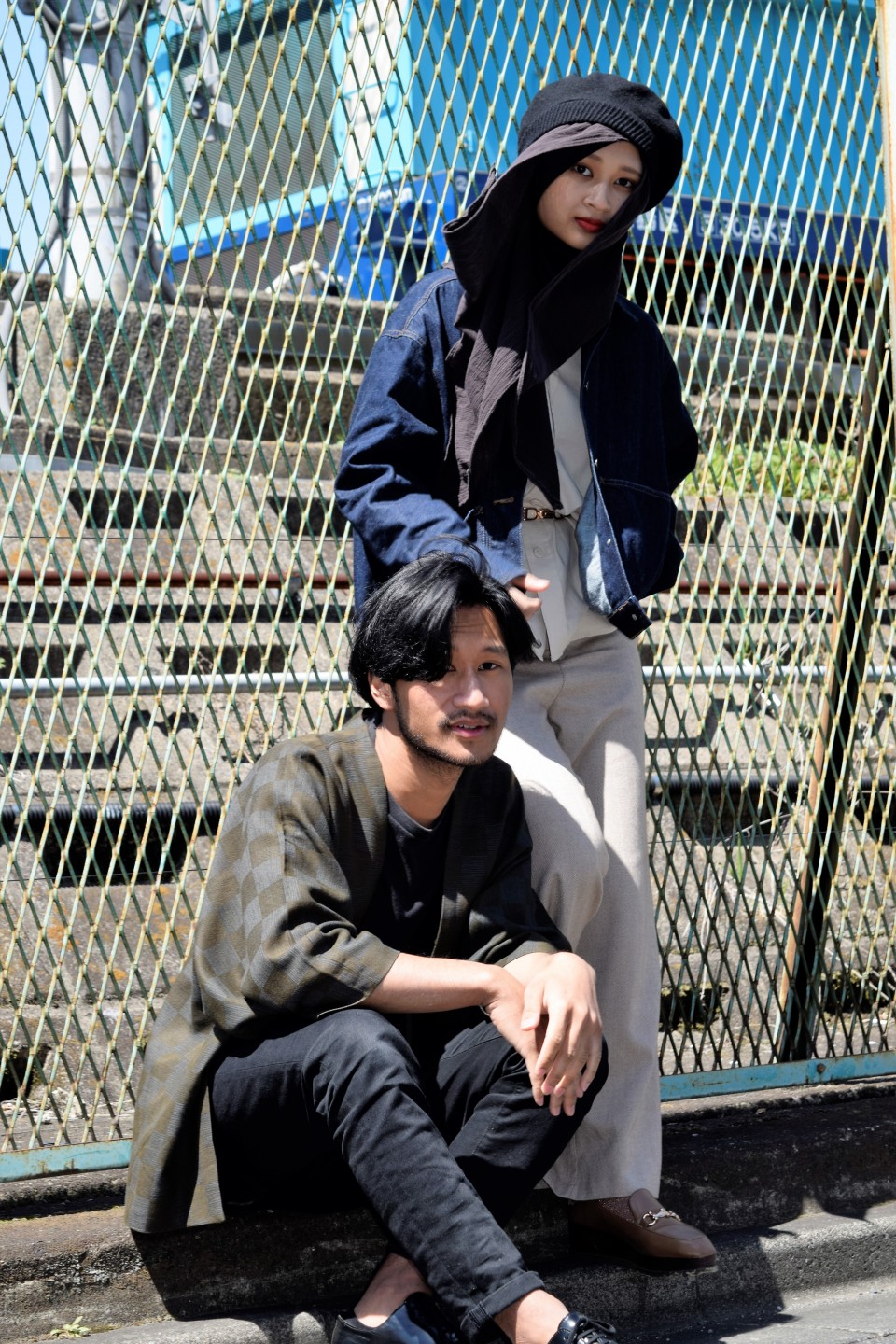 Many of these photos have Tokyo as the backdrop, including one of her more popular images taken on a station platform showing her in jeans and wearing a black cap over a long black loose-fitting hijab.

Most of her outfits are from Japan, Aufa said, as she believes brands from Muslim countries are not the only options for a modest look. Instagram has officially featured her as one of the women around the globe making an impact in their community.

While many women in Indonesia wear hijabs with bright colors, according to Aufa, she mainly chooses monochrome beige and khaki colors to blend in with everyday life in Tokyo.

She takes particular care to achieve balance in her outfits, as covering up can make her appear "flat or heavy," she said. By varying her hijab arrangements -- sometimes tight or loose fitting, or worn with hats and berets -- she can achieve as much impact as a change in hairstyle.

Although some consider Islamic teachings to be repressive toward women, Aufa does not think this is the case. She sees her faith as uplifting and liberating, not confining.

While not all Muslim women might think this way, she said, if they do choose to wear a hijab, they can find value in doing so.

"Choosing what to wear means it's beautiful for the person," Aufa said. "The hijab is a tool to live beautifully."

Aufa's brother Ghufron, 28, also adheres to his Muslim faith but does not feel restricted by boundaries.

"Our parents taught us the basics of Islam but never forced us to follow the religion," Ghufron said. "Instead, we were always told to think about what we should live for."

Both Aufa and Ghufron went through struggles in their teens regarding relationships, their plans and identity, before choosing to live as Muslims.

As a graduate student of art in the United States and Britain, Ghufron said he was impacted by how open his friends were about their religion and culture. "There was an environment where everyone could feel accepted."

While working as a curator at Tokyo Camii, one of the biggest mosques in Japan, Ghufron last year started a new career as a freelance flower arrangement artist. 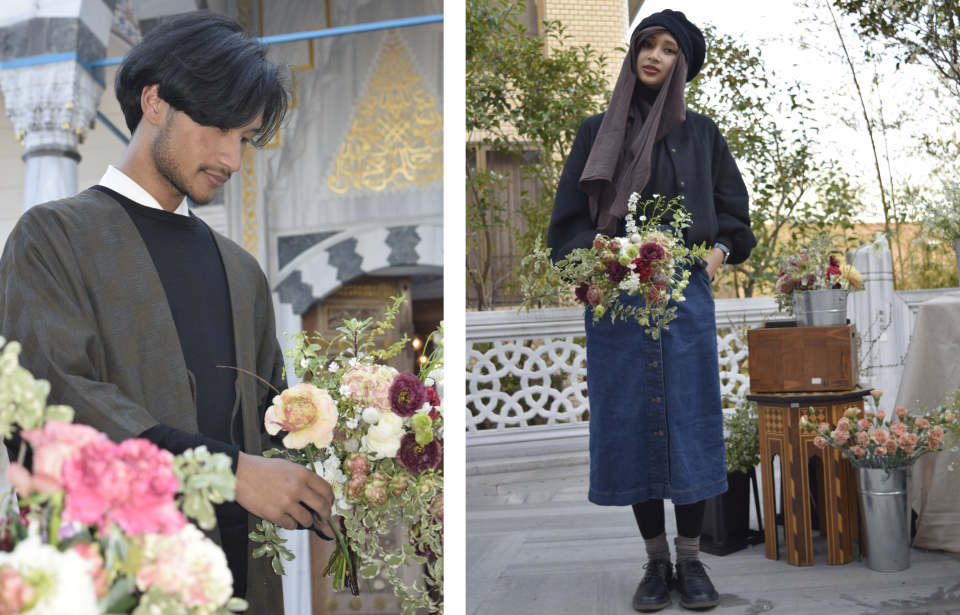 He holds workshops and takes orders for bouquets and decorations for special occasions such as weddings. Recently he decorated the Osaka branch of a major jewelry retailer and prepared bouquets for customers as gifts in an event on Mother's Day.

He was inspired to pursue this new path when he purchased a bouquet of roses for his parents' wedding anniversary and was moved by the vibrant yet fragile nature of the flowers.

"In the Quran, it says to observe the world and search for the signs that God has placed around. So for me, appreciating the beauty of flowers is part of my religion," he said. "Flowers are a gift from God."

Although it is not entirely his intention, Ghufron feels his flower arrangements -- both those he creates for events and his artwork on Instagram -- also reflect the Japanese traditional aesthetic of "wabi-sabi" and "mono no aware."

Wabi-sabi is often explained as a quiet, simple, and austere type of beauty based on transience. Mono no aware is an aesthetic ideal, involving a deep, empathetic appreciation of the ephemeral beauty manifest in nature and human life, and hence usually tinged with a hint of sadness.

Because of his upbringing in Japan, Ghufron said he admires these aesthetics, which are hard to express in words. "I think flowers have been a way for me to express these feelings, which are also related to my religion," he explained.

The siblings say their activities are not only for themselves but also for younger Muslims growing up in Japan -- a mostly homogenous country coming to terms with the concept of diversity.

Ghufron holds monthly events at Tokyo Camii as a way to bring young Muslims living in Japan together.

"For young Muslims born and raised in Japan, Islam is their parents' culture, which is foreign to them," said Ghufron. "We hope our activities encourage these young Muslims and help Japanese to become familiar with Islamic culture. I believe showing who we are and how we live could enrich Japanese society as well," he said.

Aufa believes that rather than trying to change the narrow view of Islamic culture that people in Japan might have, telling of the "beauty found in diversity" will ultimately lead to a more cosmopolitan society.

"Every one of us lives with different thoughts. I think the world can be enriched if we each recognize one another," she said. 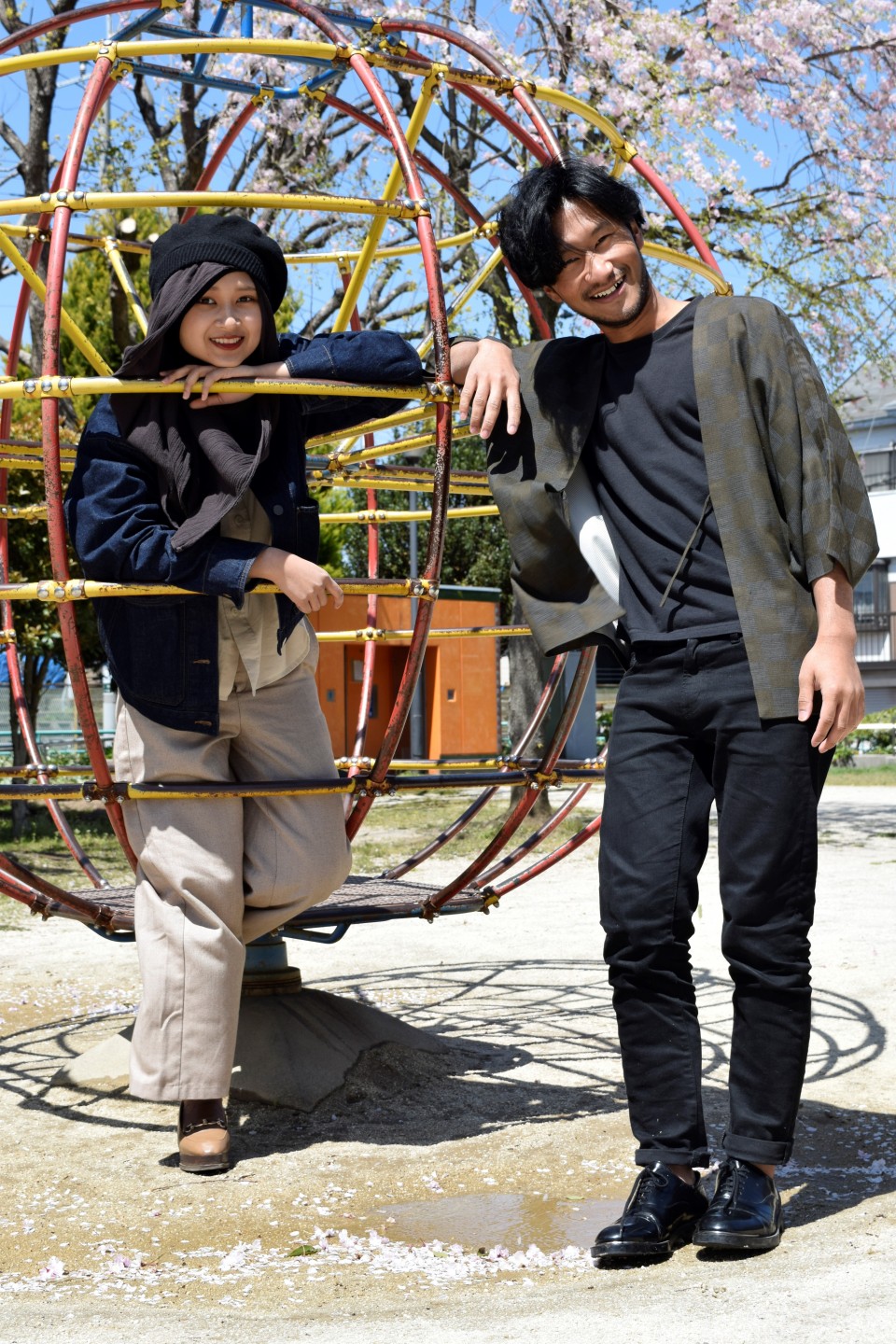