President Donald Trump's administration on Friday raised U.S. tariffs on $200 billion of Chinese goods to 25 percent from 10 percent, in the biggest escalation yet in Washington's tit-for-tat trade war with Beijing.

Immediately after the hike, China pledged to "take necessary countermeasures" -- a development that would further roil global financial markets and cast a shadow over the world economy. But the country has not specified what steps Beijing would implement.

"The Chinese side deeply regrets" the latest U.S. move, the Commerce Ministry said in a statement Friday, adding the government of the world's second-largest economy hopes that the ongoing trade dispute will be resolved through dialogue.

The tariff increase affects about 5,700 products that the United States imports from China, ranging from vacuum cleaners and computers to clothing and furniture.

Besides the hike, Trump stepped up pressure on China by saying his administration was starting paperwork to impose a 25 percent levy on $325 billion of Chinese products not yet subject to tariffs, in an effort to address what Washington regards as Beijing's unfair trade practices.

The U.S. action came after Trump accused China of reneging on commitments it had made during months of negotiations.

Senior U.S. and Chinese officials will continue talks Friday in Washington in a bid to reach a deal to end the trade war. 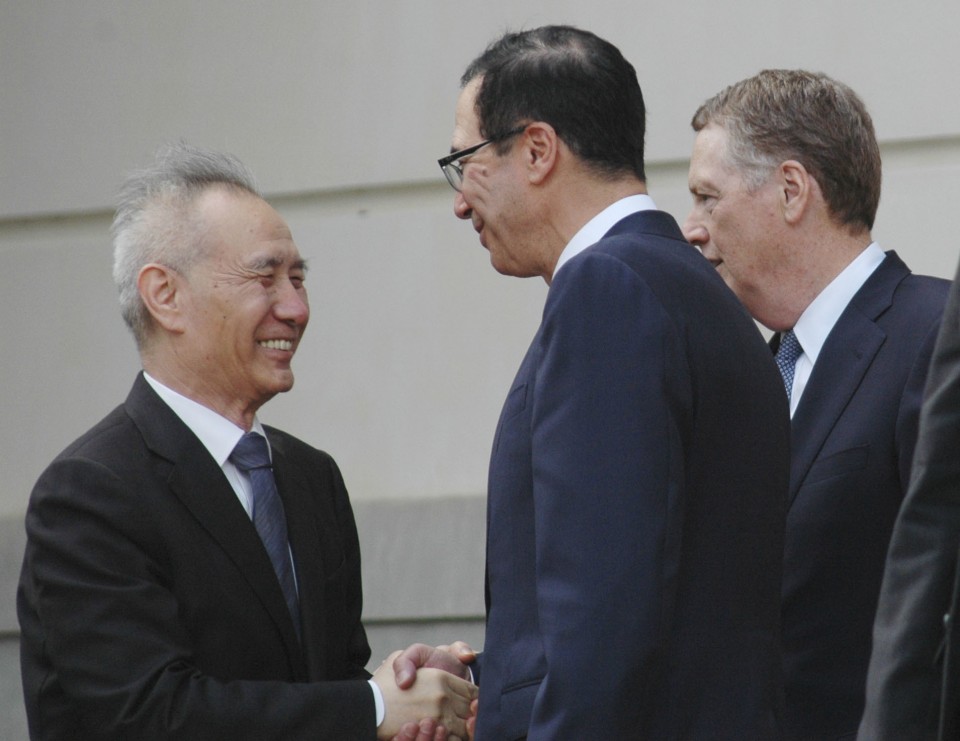 Following the first day of the two-day talks, U.S. Trade Representative Robert Lighthizer and Treasury Secretary Steven Mnuchin had a working dinner Thursday with Chinese Vice Premier Liu He, the White House said, without providing details about the day's talks.

According to the filing Wednesday in the Federal Register, the tariff increase will not cover goods that had already left Chinese ports before Friday's deadline, meaning the levies will not take effect until shipments complete a few weeks of travel across the Pacific.

Speaking to reporters before the meeting, Trump said it is "possible" to get a trade deal with China this week and he "will probably speak to" Chinese President Xi Jinping by phone.

"I did get, last night, a very beautiful letter from President Xi," Trump said. He said the Chinese leader told him, "Let's work together. Let's see if we can get something done."

Liu, Xi's economic adviser, said China believes that raising levies "is not a solution to the problems," according to Xinhua.

Higher tariffs are harmful to both countries and the world, he was quoted as saying.

China's economy has recently shown signs of slowing down with additional tariffs dampening exports to the United States, the world's biggest market, and choking private spending and investment at home.

In April, meanwhile, the International Monetary Fund maintained its forecast for global economic growth in 2020 at 3.6 percent but noted that "the possibility of further downward revisions is high," citing risks such as trade tensions and financial vulnerabilities.

Trump criticized China over its negotiation stance. "We were getting very close to a deal, and then they started to renegotiate the deal. We can't have that," he said.

"They took -- whether it's intellectual property theft -- they took many, many parts of that deal and they renegotiated. You can't do that."

With Friday's action, the administration now imposes a 25 percent duty on a total of $250 billion in imports from China, in response to alleged intellectual property and technology theft by Chinese companies.