The man who went on a fatal stabbing rampage Tuesday morning in Kawasaki, near Tokyo, shouted "I'm gonna kill you" as he held knives in each hand, eyewitnesses said.

Pools of blood were left at the scene where students of a nearby elementary school were attacked over a few minutes while waiting for a school bus.

Hospitals confirmed the deaths of two victims -- an 11-year-old girl and a 39-year-old man, the father of one of the students. The suspected attacker also stabbed himself in the neck and later died in hospital.

"I heard children scream 'I'm scared' and then turned to see a man with knives shouting, 'I'm gonna kill you,'" said Toshichika Ishii, 57, who was at a park near the site, adding he saw children falling to the ground. 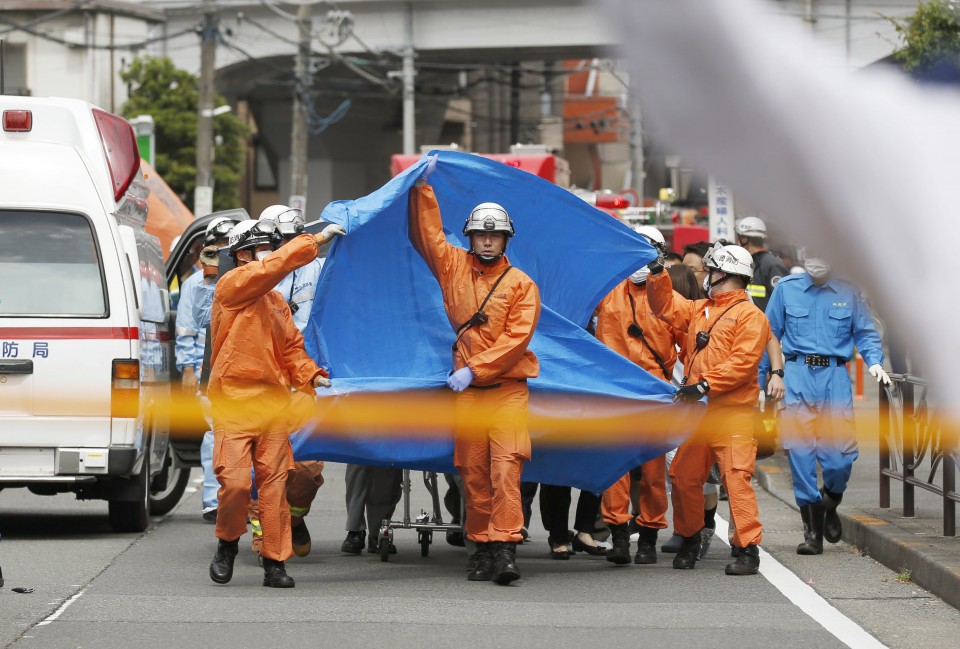 Satoru Shitori, vice principal of Caritas elementary school, described the horror that occurred as he was helping children get onto a bus.

"When I finished helping around six children board, I heard children screaming at the end of the line," Shitori said in a press conference. That was when he saw the suspect, holding what appeared to be long knives, escaping on foot.

"I started to run after the suspect but then saw the driver get out of the bus to chase him," he said. The vice principal then called the police on his cellphone as he checked the condition of the wounded students.

Police quoted a bus driver as saying, "I tried to stop him, but he started stabbing children and others."

"He then moved dozens of meters away and stabbed his own neck," the driver said, according to the police.

Kazuhiro Yoshida, 60, another bus driver for the school, said he got off his bus when he arrived near the scene and found "pools of blood."

"A man in dark clothing was lying on the ground and not moving," Yoshida said.

Many of the victims sustained wounds to the neck, and they may also develop post-traumatic stress disorder, according to hospitals treating them.

Around ten children were observed lying on the ground, while others sat on the pavement asking for their parents.

Some children had run toward the station or into a nearby convenience store. 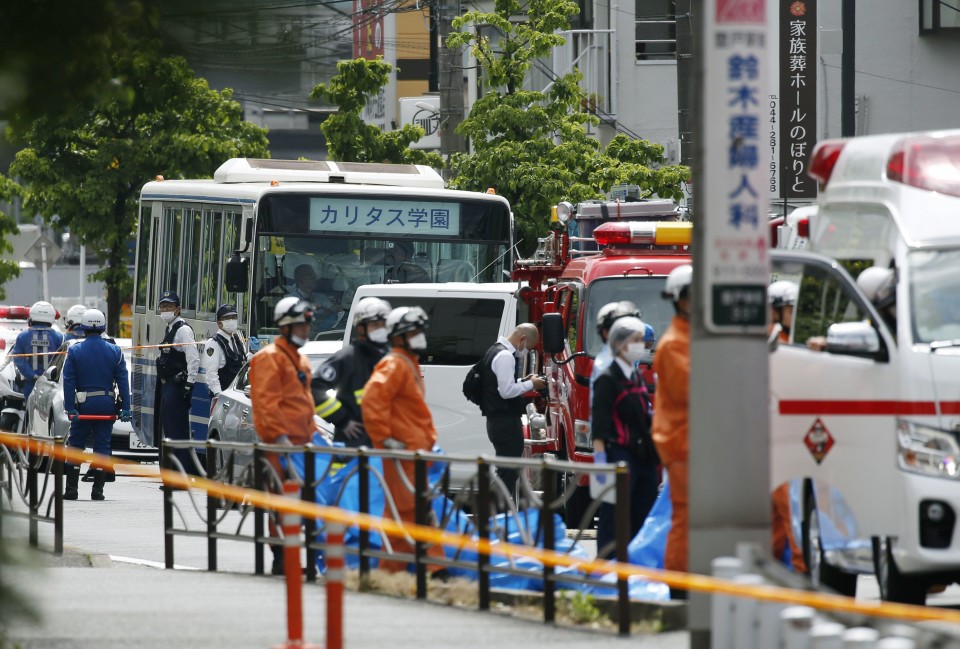 A university student at the station saw a girl with a blood-stained shirt who was unresponsive as a woman, who appeared to be her mother, held her hand crying uncontrollably.

A woman in her 40s who lives near the scene said she saw a rescue worker conducting a cardiac massage on a girl and "blood flowing from a man in a suit crouching on the ground and forming a pool."

The scene and its vicinity were cordoned off as investigators collected evidence.

Parents arrived at the Catholic private school to pick up their children as the school and the local education board scrambled to gather information on the attack.

"I heard from the school that my daughter was inside the bus (when the attack took place.) I heard she's fine but I have not been able to meet her yet," said the father of a first grader.

Schools in Japan have stepped up safety measures ever since a knife-wielding man, who wanted to be sentenced to death, entered an elementary school in Ikeda, Osaka Prefecture, and killed eight students and wounded 15 others in 2001.

Many schools lock their gates once classes start, and security cameras have been introduced. Volunteers and members of parent teacher associations also line the routes leading to schools.

"Even if we thoroughly implement a plan, it is difficult to totally prevent crimes," said a senior education ministry official.

In the wake of Tuesday's attack, education minister Masahiko Shibayama called for the redoubling of efforts to secure school safety.

"The government as a whole must take measures including checking the safety of routes to schools and share information on suspicious individuals," he said. 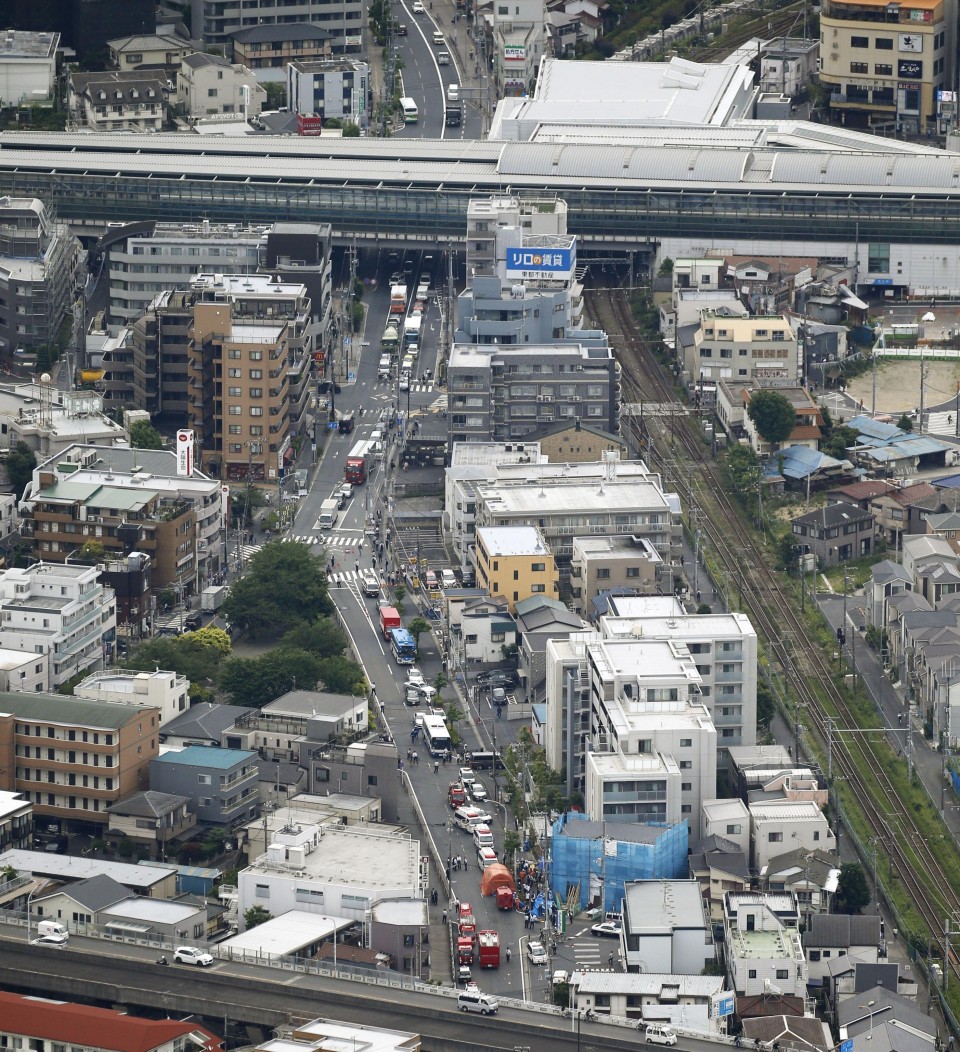