U.S. President Donald Trump on Monday welcomed Prime Minister Shinzo Abe's efforts to reach out to North Korea and Iran, but ramped up calls for Japan to fix its "unbelievably large" trade surplus as the leaders agreed to accelerate talks toward an early reciprocal deal.

After their talks in Tokyo, Abe said the two allies are "completely" on the same page over how to handle North Korea even though Pyongyang's recent firing of short-range ballistic missiles triggered contrasting responses and Trump said he was not disturbed. 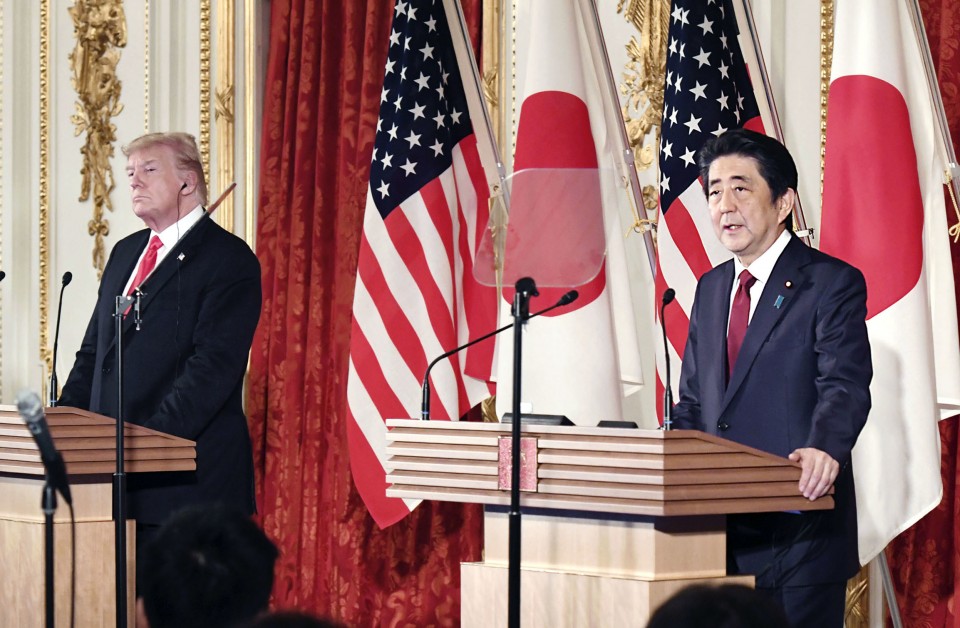 "President Trump gave me his full support for my determination to meet with Chairman Kim Jong Un and hold talks frankly and said he will extend support of any kind," Abe said at a joint press conference.

Following a round of golf and watching a sumo tournament to deepen personal ties on Sunday, Trump said the bilateral relationship has "never been better than it is right now" as both nations are "committed" to each other.

Abe is hosting Trump on a four-day state visit through Tuesday seen largely as ceremonial rather than substantive and said the visit has proven the "best opportunity" to demonstrate the unwavering bilateral alliance.

Received as the first foreign guest, Trump had an audience with new Emperor Naruhito, who ascended the throne on May 1, and his wife Masako at the Imperial Palace.

Despite the apparent show of personal rapport, Trump did not forget to land a jab at Japan's trade imbalance with the United States, suggesting there may be a major announcement on progress over the issue in August.

"Trade-wise, I think we will be announcing some things probably in August that will be very good for both countries," Trump said at the outset of the meeting with Abe before they agreed to speed up trade talks to create a win-win relationship.

"We'll get the balance of trade, I think, straightened out rapidly," Trump said. 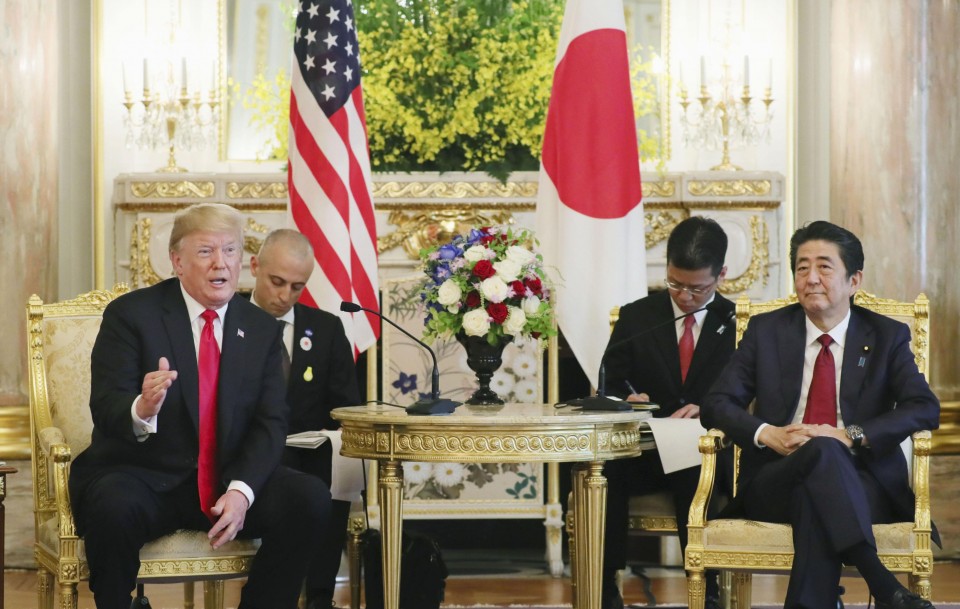 Ahead of an upper house election in July, chances appear low that Japan will give ground in ongoing trade talks, and Trump's indication that he may wait until August is a relief to Abe, albeit for the short-term.

So far, the United States has warned of imposing higher tariffs on cars and auto parts on national security grounds and concern persists that the Trump administration will use the threat of levies and import quotas to draw concessions from Tokyo.

As American farmers have become less competitive due to Trump's aversion to multilateral free trade agreements, such as a revised Trans-Pacific Partnership from which the U.S. leader withdrew, Washington is urging Tokyo to cut tariffs on farm products such as beef, pork and wheat.

On Monday, Trump said he has nothing to do with the TPP, adding, "What other countries agree to is not binding at all on the United States."

As bilateral talks are under way, Japan has taken the position that it will not make larger concessions than those under existing free trade agreements, including the TPP.

Besides trade, Abe and Trump covered issues that are both bilateral and regional such as North Korea and Iran, and agreed to promote a free and open Indo-Pacific in the face of China's growing clout. 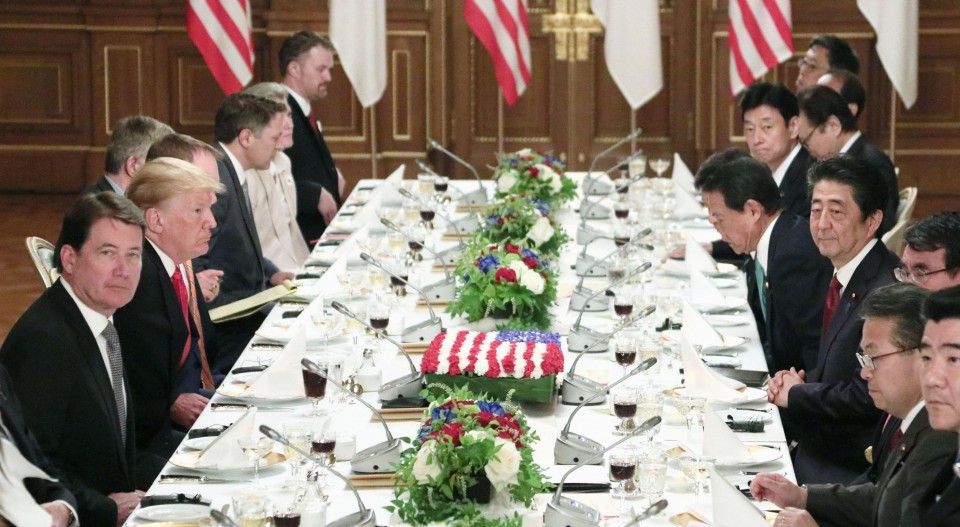 Abe said at the joint press conference that no date has been set for his much-anticipated summit with Kim but he is determined to meet the chairman without preconditions.

That is a shift from his previous stance on North Korea that any meeting should yield progress on the issue of Japanese nationals abducted in the 1970s and 1980s.

"Irrespective of whether one summit will solve the issue, I have a responsibility as prime minister to spare no efforts toward resolving it," Abe said.

Up to now, Abe has relied on Trump, who has met with Kim twice for denuclearization talks, hoping the U.S. president will help break the deadlock in the long-standing abduction issue.

A cloud of uncertainty had loomed over the Abe-Trump summit -- the second of three planned over a three-month period -- due to differing approaches to Pyongyang's missile launches.

Japan protested to North Korea over the May 9 launches of short-range ballistic missiles as contravening U.N. Security Council resolutions, while the United States downplayed their significance.

Trump tweeted Sunday that North Korea fired off "some small weapons, which disturbed some of my people, and others, but not me," contradicting his security adviser John Bolton who said a day earlier that the missile tests violated U.N. Security Council resolutions.

When asked if he was not bothered at all about the missiles, Trump said, "No, I am not. I am personally not." 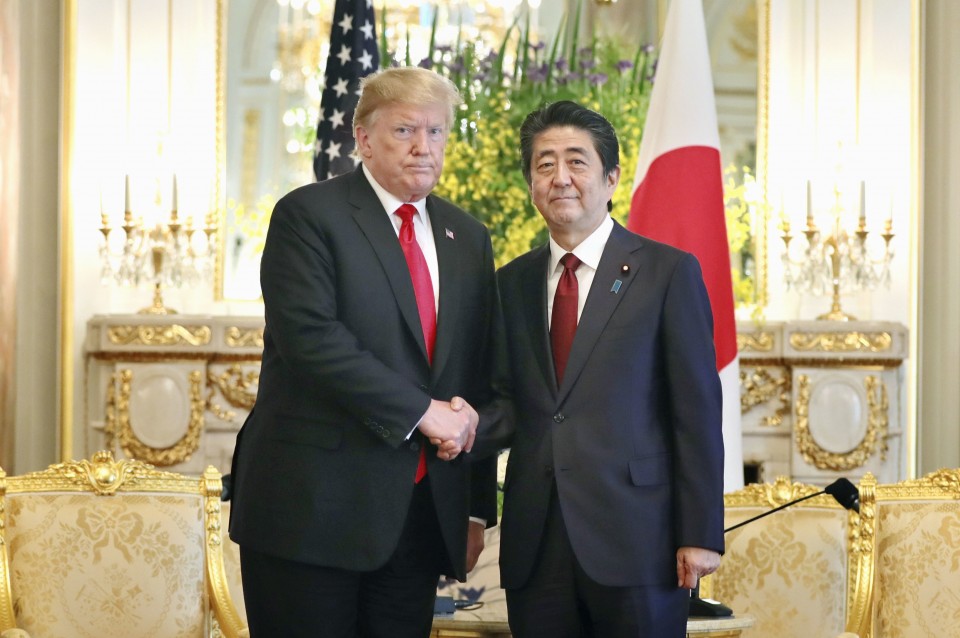 Rising tensions in the Middle East were also on the summit agenda as Abe is now considering visiting Iran in mid-June to serve as an intermediary between Washington and Tehran, according to Japanese government sources.

About Japan's efforts to mediate between Washington and Tehran, Trump said, "The prime minister and Japan have a very good relationship with Iran so we'll see what happens."

Abe has held a number of phone conversations and face-to-face meetings with Trump to align their policies while trying to connect with the often unpredictable president by playing golf with him five times. Trump plans to visit Japan again for a Group of 20 summit in Osaka on June 28 and 29.