The South Korean government will "carefully review" Japan's request for arbitration in a dispute over the issue of compensation for laborers made to work during Japan's colonial rule of the Korean Peninsula, the Foreign Ministry said Monday.

"Our government today received an official letter from the Japanese side through a diplomatic channel asking for the convening of a mediation panel" based on a 1965 bilateral agreement that addressed problems of property and claims between the two nations. 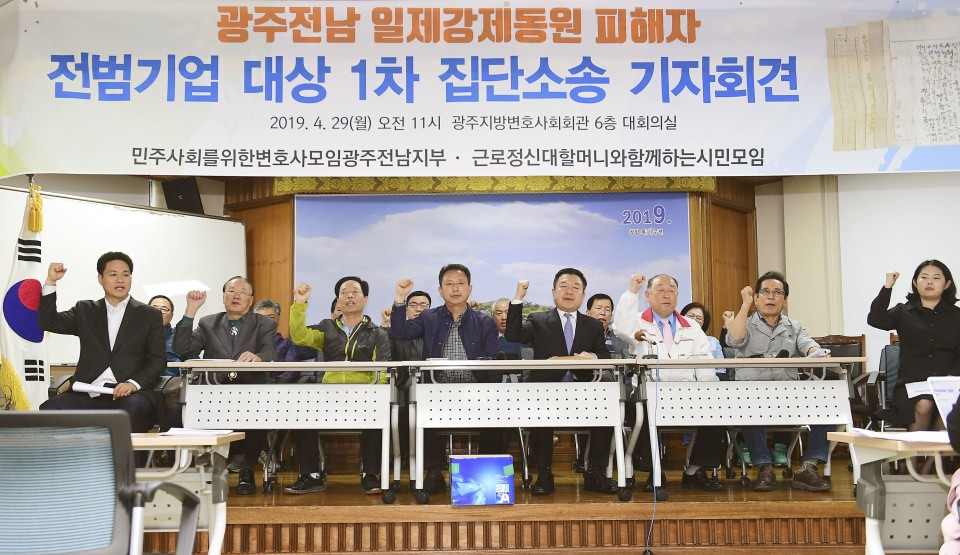 (Plaintiffs in new lawsuits filed against Japanese firms over wartime labor and their lawyers attend a press conference in Gwangju, South Korea, on April 29, 2019.)

"The government will carefully review the Japanese side's action in every aspect," the statement added.

Earlier Monday, the Japanese Foreign Ministry said it has requested the establishment of an arbitration panel involving members of a third country as provided for under the accord, after months went by without Seoul responding to Tokyo's move to seek a diplomatic solution.

Relations between the two countries have become particularly tense since last October, when South Korea's top court ordered a Japanese steelmaker to compensate former Korean laborers for forced work. Since then, a number of similar rulings have been handed down on other Japanese companies.

Despite the rulings, the companies have refused to comply in line with Tokyo's position that the issue of compensation was resolved "finally and completely" under the accord.

That has prompted some of the former laborers who have won cases against Japanese firms to begin proceedings to sell off assets held by the firms in South Korea, increasing a sense of urgency on Tokyo to act through a dispute settlement mechanism under the 1965 accord.