While athletes will take center stage at the 2020 Tokyo Olympics and Paralympics, volunteers -- able-bodied and disabled -- are expected to play a significant role in supporting spectators and others who will flock to the games.

"Please show your support until the end," Yoshihiro Muramatsu said as he handed out commemorative bags to attendees at the main entrance of a "para-ekiden" long-distance road relay at Komazawa Olympic Park in March.

Muramatsu, a first-year student at the Acupuncture and Physical Therapy Teacher Training School at Tsukuba University, volunteered at the event in Tokyo, where teams of runners and para-athlete runners passed the sash over an 18.736-kilometer course. 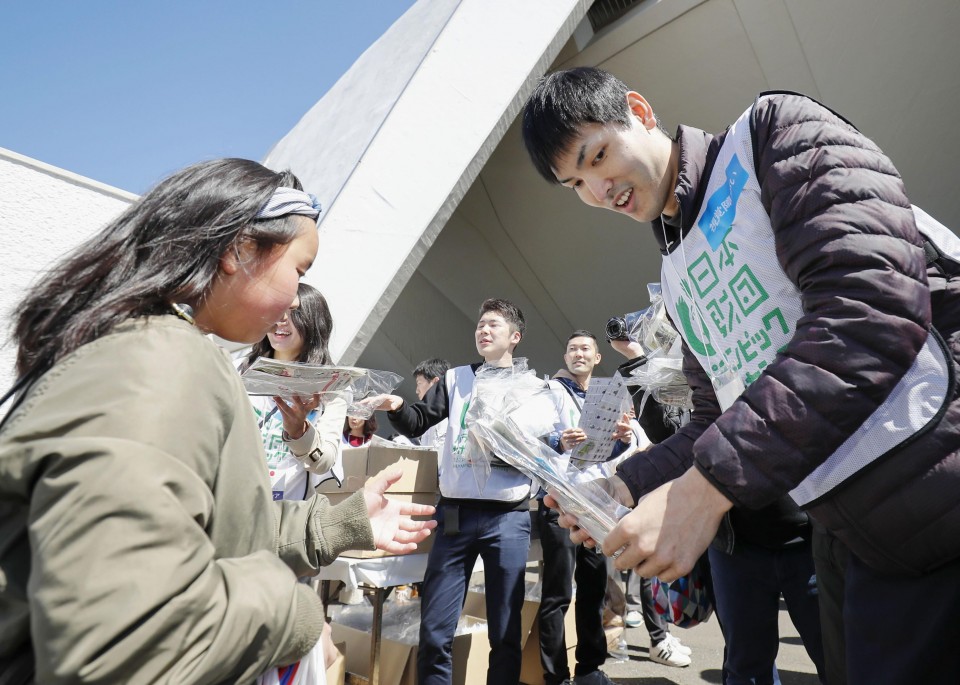 The 28-year-old Muramatsu, who lost his vision when he was a junior high school student, has applied to volunteer at next year's Summer Games.

"You don't really come across a chance in your life when you can be involved in the Olympics and the Paralympics," he said.

It is seen as key that volunteers with disabilities work in tandem with others around them at the Tokyo Games, which start in less than 500 days.

At the ekiden event, Muramatsu was part of a team with five able-bodied volunteers, who warned him when he needed to take extra care while performing his duties.

"People let me know when a woman or a child was coming. I was able to bend down when handing (the bags) to people in a position that was easier for them to reach," he said.

Organizers of the 2020 Tokyo Olympics and Paralympics have received more than 200,000 applications from prospective volunteers, far exceeding their target of 80,000.

The organizing committee will hold orientation and interviews until late July, and will notify applicants by around September whether or not they have been accepted, based on desired roles and needs that must be fulfilled.

The volunteers, who will provide support at facilities such as sports venues and the athletes' village, are in principle expected to work eight hours a day for 10 days or more.

Individual municipalities will solicit more volunteers. At the 2012 London Games, about 2,800 people, or 4 percent of some 70,000 total volunteers, had impairments. 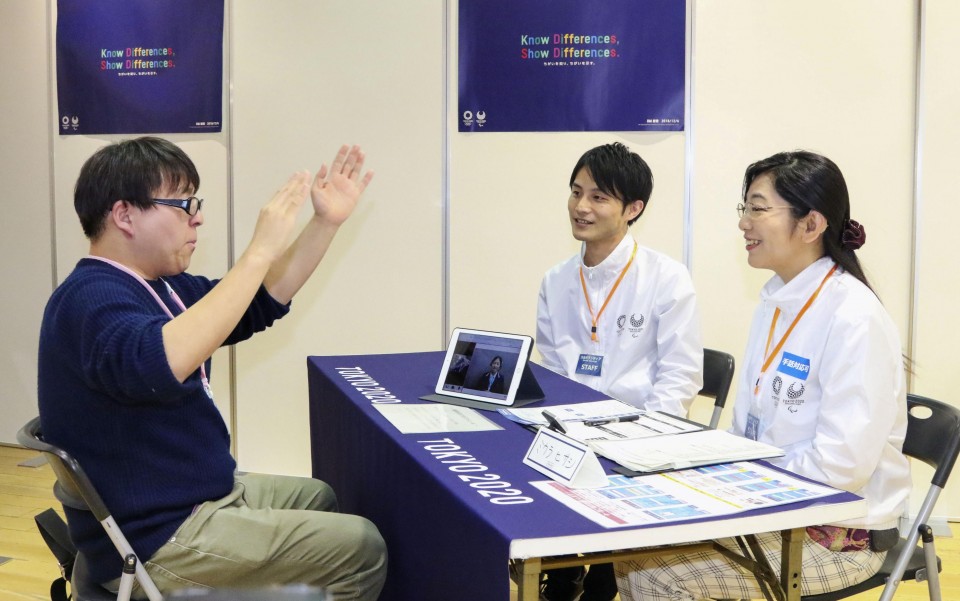 (A man with hearing impairments gives an interview with a tablet that interprets sign-language.)

At interviews held on April 10, the organizing committee prepared tablet devices for those with hearing impairments. The tablet acts as a sign-language interpreter, and displays a written version of what an interviewer says.

Indeed, the tablets are likely to come in handy in regional areas where sign-language interpreters are in short supply.

"There are occasions when we have to care for people on an individual basis. We would like to devise ways of choosing the roles and positions best suited to volunteers' needs, so they can be assured of giving full effort to their tasks," an organizer said.

Some interviewees said they are unable to carry objects because of physical impairments, or asked not to be exposed to sunlight due to other ailments, according to organizers.

Shinji Takuwa, a 56-year-old man with a hearing impairment, hopes to volunteer at the games to show his appreciation for the support he received when he competed as a swimmer.

"I had been an athlete in the past, so I wanted to repay the kindness by supporting the games," said Takuwa, from Chiba Prefecture, near Tokyo.

He volunteered at a recent marathon event in the prefecture, where he was in charge of an automated external defibrillator (AED) in case of an emergency. Using a smartphone provided by organizers, he traveled the course on a bicycle. Takuwa was able to respond swiftly to an emergency call from headquarters, he said.

Masaya Ninomiya, an adviser at the Nippon Foundation Volunteer Support Center, said, "We don't need to brand people with disabilities as those in need of support. Many people want to volunteer, so I think people can apply their various skills in the places that suit them best."