"With President Xi's visit, I want to further develop bilateral ties that have returned to a normal track and jointly create a new era for Japan and China," Abe said when meeting China's top diplomat Yang Jiechi at the prime minister's office.

Yang, a member of the Political Bureau of the Chinese Communist Party's Central Committee, responded by saying he sees "new momentum" for bilateral relations.

"I'm confident that our ties are not only back on a normal track but will continue to develop in a healthy and stable manner," he said.

Japan and China have for years been mired in a territorial row in the East China Sea. But their ties have been improving recently with mutual visits by senior government officials and business leaders.

Abe and Yang agreed to step up preparations for what will be Xi's first visit as president to Japan on the occasion of the G-20 summit in Osaka on June 28 and 29, the Japanese Foreign Ministry said. 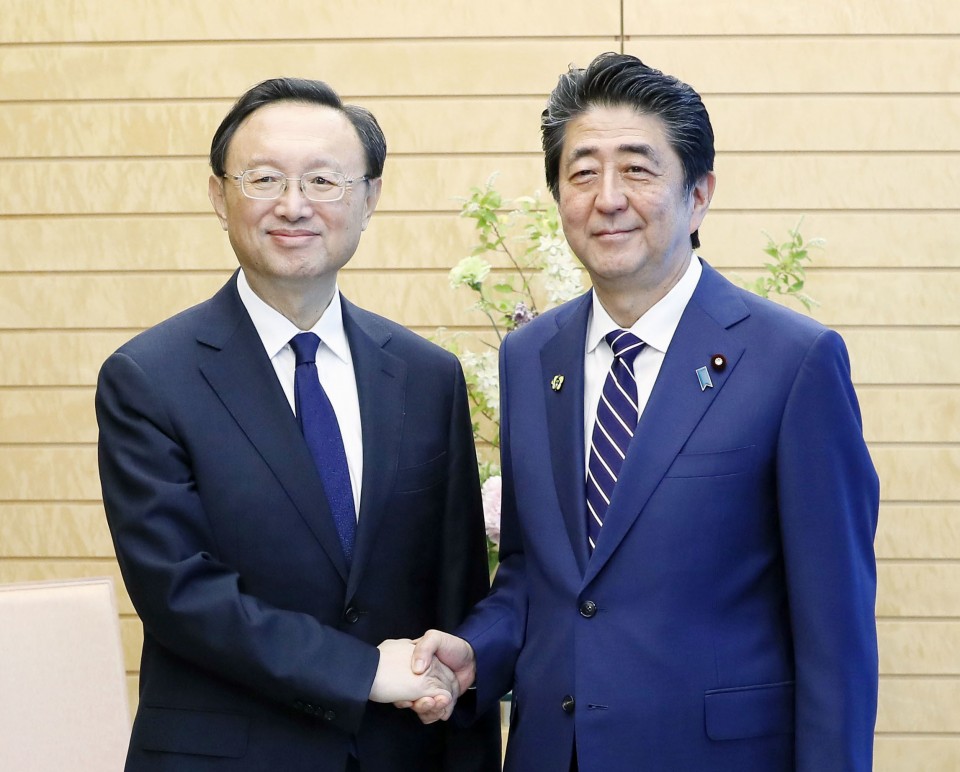 During a separate meeting earlier in the day, Foreign Minister Taro Kono expressed hope of demonstrating that the bilateral relationship has been "markedly improving" at the G-20 gathering. Yang said China hopes the summit in Japan will be successful.

The leaders of the G-20 major economies will discuss global issues at a time when the United States and China are involved in an escalating trade conflict, casting a shadow over prospects for the world economy.

Abe plans to meet with both Xi and U.S. President Donald Trump on the G-20 fringes.

Yang also met with Shotaro Yachi, Japan's national security adviser and a close aide to Abe, on Thursday and Friday in the central Japan resort town of Karuizawa.

Yang told Abe that he and Yachi had "in-depth and wide-ranging" talks.

The Japanese government said Yang and Yachi agreed on the importance of realizing peace and cooperation in the East China Sea, and that they also discussed the situation in North Korea and the U.S.-China trade battle.