A plan has been forged to establish a new shrine in Fukushima Prefecture as a substitute for the many others that were damaged or made inaccessible by the 2011 quake-tsunami disaster and nuclear crisis, local authorities said Wednesday.

The local branch of the Association of Shinto Shrines said they plan to build the new place of worship on the grounds of the tsunami-hit Hachiman Shrine by the end of March 2021.

The shrine is located in the town of Futaba, one of the hosts of the crippled Fukushima Daiichi nuclear plant, but it is in an area where radiation levels are relatively low.

At least 30 shrines in the prefecture remain badly damaged after the disasters and 44 are in areas where access is restricted due to high radiation levels.

Representatives of each of the 74 affected shrines will decide whether to join the project or not.

According to the Association of Shinto Shrines based in Tokyo, it is the first case in which a shrine is built to replace others that have been unable to operate due to a disaster.

The move, which is said will bring together deities worshipped at each shrine, is also intended to help preserve traditional performing arts and festivals associated with each community, it said.

"The revival of the shrines that have served as local community hubs should offer solace to people affected by the calamities," said Masahiro Tanji, who heads the Fukushima branch of the association.

All Futaba's residents continue to live outside the town following the nuclear crisis, one of the world's worst ever, that resulted in three reactor core meltdowns.

But the Hachiman Shrine, located in a coastal district of Nakano, was selected as a candidate site for the project because it experiences lower radiation levels and is located near the site of an envisioned memorial park Fukushima Prefecture is planning to build.

The town of Futaba hopes that an evacuation order for Nakano and some neighboring areas will be lifted in the spring of 2020, earlier than other parts of the municipality.

There are a total of 240 shrines within the 20 kilometer-radius of the Fukushima Daiichi plant, which was designated as a no-go zone soon after the nuclear crisis began. Of the 74 struggling shrines, not all are in the 20-km radius. 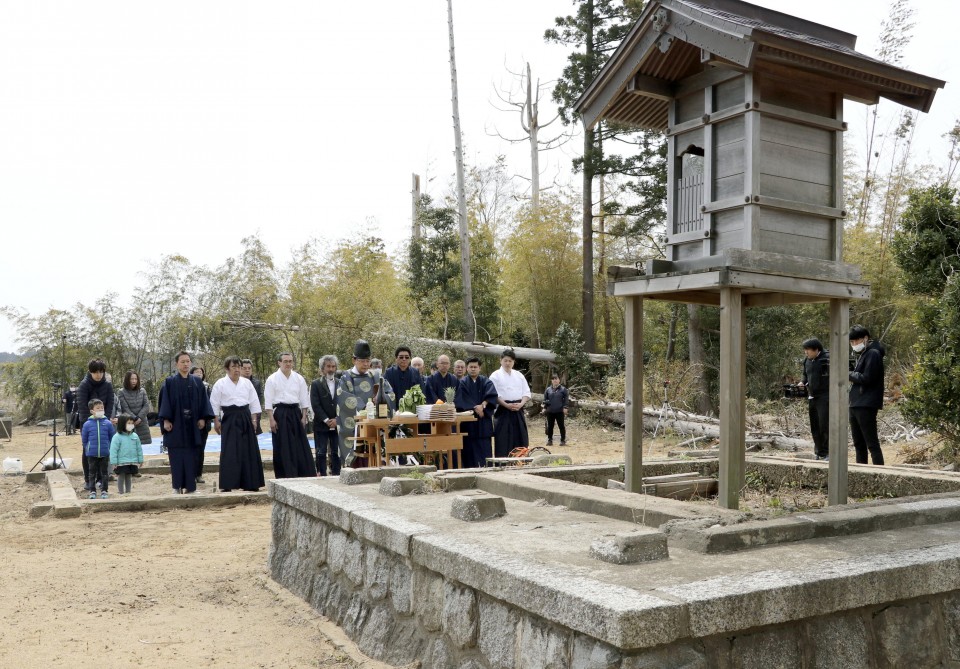 Many shrines have struggled in the wake of the disaster due to the displacement of parishioners and their inability to secure government reconstruction support due to the principle of separation of religion and government.

Their predicament led the shrines to come up with the consolidation plan and their chief priests agreed to go ahead with the project in June last year.

While some parishioners have expressed sadness at the change, Hirohisa Takakura, the 57-year-old chief priest of Hachiman Shrine, said "there will be shrines that will rust away and be unsustainable" unless they act.

Takakura now makes a 90-minute journey from his residence to the shrine twice every month to clean the grounds.

He remembers fondly how, before the disaster, the shrine would be crowded with local residents who gathered for the Bon festival dance, but he maintains the only solution is "to move forward."