In the note left at her home, the site of her April 30 death, she wrote that the coach and teacher at her school, had called students "idiots" and told them, "I will kill you." He also made physical contact with several club members, according to the Takahagi city education board in Ibaraki Prefecture. 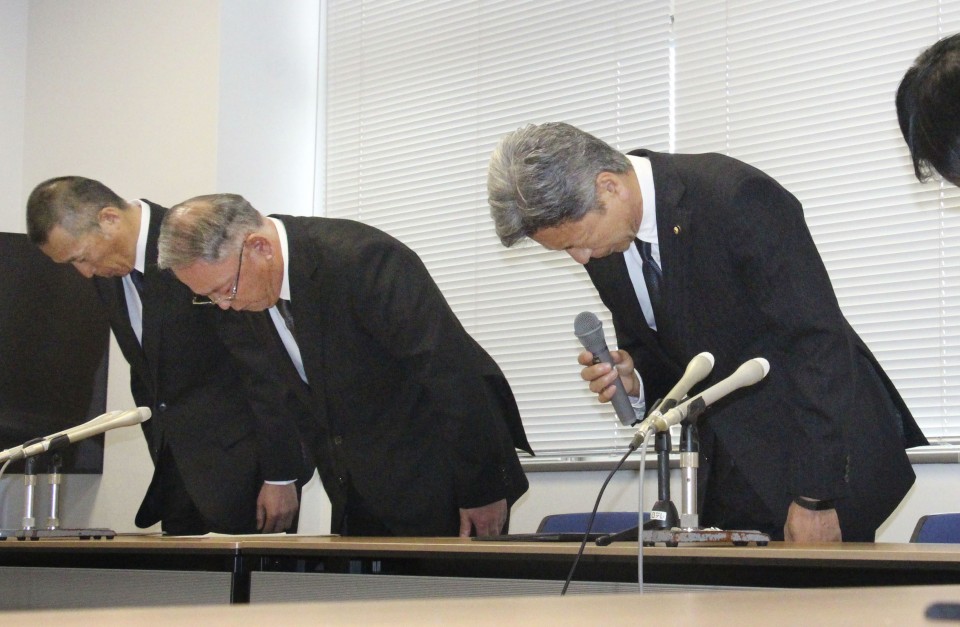 (Officials of the Takahagi city education board apologize at a press conference held on May 6, 2019 after the suicide of a 15-year-old junior high school girl.)

The teacher is a veteran table tennis coach and the club has a track record of sending players to compete in national tournaments. He largely admitted to the girl's allegations, saying, "The coaching had gone too far," the board said.

In a questionnaire distributed by her school, the name of which the girl's family has requested be withheld, last September, the girl wrote, "I enjoy going to school but club activities are boring. I get frustrated when I participate."

She continued to attend the school but stopped going to the table tennis club from March 15, the board said.

In March, the education board received an anonymous phone call about the teacher, prompting the school to give him a verbal warning and to begin monitoring him during club activities.

The teacher was also seen slamming a paddle on the floor when he became very angry, the board said.

"I've heard that the student was cheerful and energetic, and saw things through to the end once she decided to do them," said Tomio Ouchi, head of the education board. "Responsibilities of the school and the education board are very grave. We apologize deeply."

Though the school principal and others had warned the teacher after receiving complaints about his coaching, they failed to extend sufficient care to students, the board said.

The board said it will set up a third-party panel involving a lawyer to investigate the cause of her suicide and to study measures to prevent a similar incident from occurring again. It will also offer counseling to students.

Meanwhile, one of the girl's friends told Kyodo News that she was also stressed about her relationship with her family before her death.

Yuji Sunaga, deputy leader of a nonprofit group tackling child suicide, said, "It is necessary to examine how the school responded after exploring the cause of her suicide from various perspectives, including her relationship with teammates and concerns about her family."