Justine Siegal just wanted to play baseball, but she's done so much more.

The first woman to pitch batting practice to major leaguers and the first to be employed as a coach by a major league team when she worked for the Oakland Athletics in the Arizona Instructional League, Siegal is in Japan to work with Akinori Iwamura, a former big leaguer who skips the 24-man team. She will be with the team until June 10.

"I think it's really important that girls and boys can look around and see women performing these jobs," the 44-year-old Siegal told Kyodo News in a recent interview.

"I think it makes a better world, when girls and boys know it's not a box they have to fit in, that they're free to follow their passions. That is not in contrast to understanding that I just love baseball."

That love was tested as a girl when she was told she should play softball as American girls aspiring to play baseball frequently are. Siegal said that had people not continually badgered her about giving up baseball to play softball, she might easily have just moved on to her second-favorite sport, soccer.

But the "play softball" advice eventually became a goad, propelling her down the base paths toward an uncertain future, where she heard every excuse -- including a shortage of uniforms -- for discrimination based on gender.

"One of my father's best gifts to me was that he never asked me to play softball," she said. "I think if I'd have played softball, as I was asked to over and over and over, I would have had a very different life, one of acceptance, perhaps popularity. But I took the lonely road, where I followed my passion, just the belief that I should be allowed to play."

"I played in college fall ball and men's leagues. I played in high school, too. I chose a specific college that had a no-cut policy for baseball, and so they decided to make a cut with me. They said there were no more uniforms, so then I had to move on to the men's leagues."

There came a time, however, when baseball moved from being an individual mission to play for herself to being part of a broader, more comprehensive movement. Siegal, who holds a doctorate in sports psychology, said her life changed with the birth of her daughter.

"I was 23 and I just looked at her and decided if she wanted to play baseball, I wanted her to have a path that didn't include discrimination," Siegal said. "And that was the moment when I decided to see what I could do to make the game more accessible." 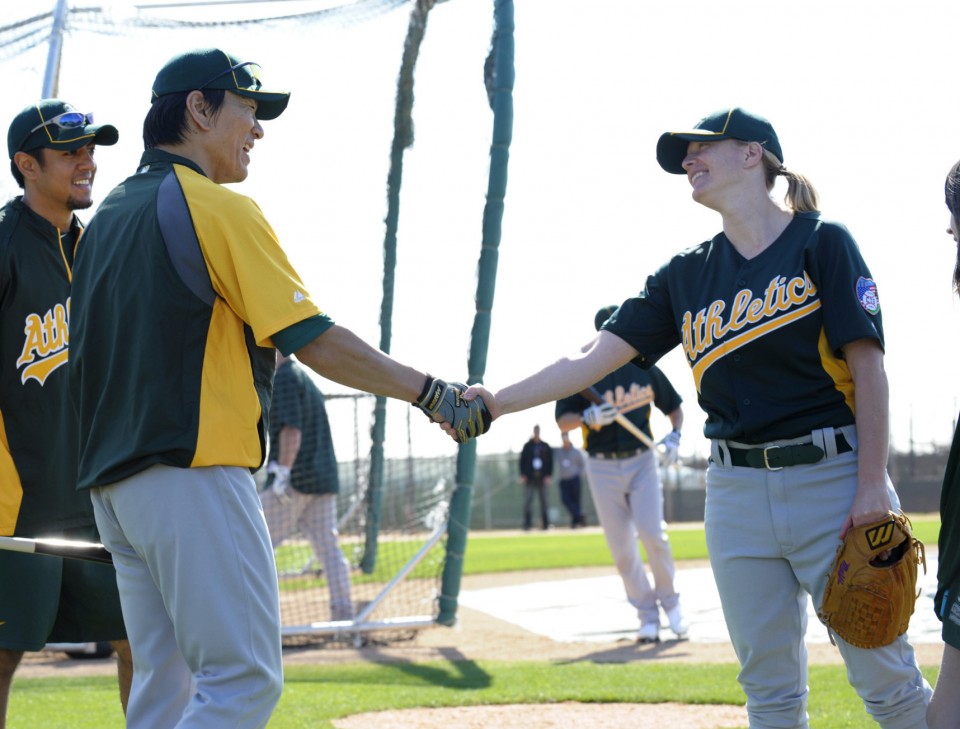 So, she founded Baseball For All, which officially became a nonprofit in 2010, when a parent helped her with the details.

"It started with the women's league, then I realized that the future is really in the girls. At the time, there wasn't a voice for girls playing baseball, and I felt they should be heard," Siegal said." I felt that if they could meet one another and see that there were other girls playing baseball then they might not feel that same loneliness I felt."

"Not only does (Baseball for All) provide opportunities for girls to play and coach and lead in baseball, it helps fight the discrimination girls are still facing on the field, whether that's a girl being told she can't try out for a team...we help them understand the law and see what steps they might be able to take."

"There's about 100,000 girls playing baseball and about 1,500 girls playing high school baseball. So that means you've got about 98,000 girls leaving the sport. What's happening to them? In America softball and baseball almost compete with each other. There's a societal myth that boys play baseball and girls play softball. But we're breaking that down."

Six months ago, Siegal began asking about coaching opportunities in Japan, and the Red Hopes were a good match. Manager Iwamura is an advocate for women's baseball, and the club's main park, Azuma Stadium, will host Tokyo 2020 Olympics baseball and softball games.

Asked what duties she expected to perform during her stint with Fukushima, Siegal said, "Just be of service."

During her time with the A's she said she threw batting practice, hit fungoes and coached first base -- whatever needed doing. And she expects more or less the same in Japan, where the sight of a woman teaching men to play professional baseball will definitely be a new look.

"From a coaching standpoint it's about helping players and the team," Siegal said. "I understand the significance of what I'm doing and what it means to girls and women, but at the same time I just love baseball and I love helping athletes become better."