A Japanese court determined Tuesday that the now-defunct eugenics protection law that mandated the government to stop people with intellectual disabilities from reproducing was unconstitutional, but it dismissed a damages suit filed by two women who underwent forced sterilization.

In the first ruling in a number of suits filed with seven district courts in Japan, the Sendai District Court rejected the 71.5 million yen ($653,000) damages suit filed by women in their 60s and 70s in Miyagi Prefecture, northeastern Japan, saying the statute of limitations had expired. 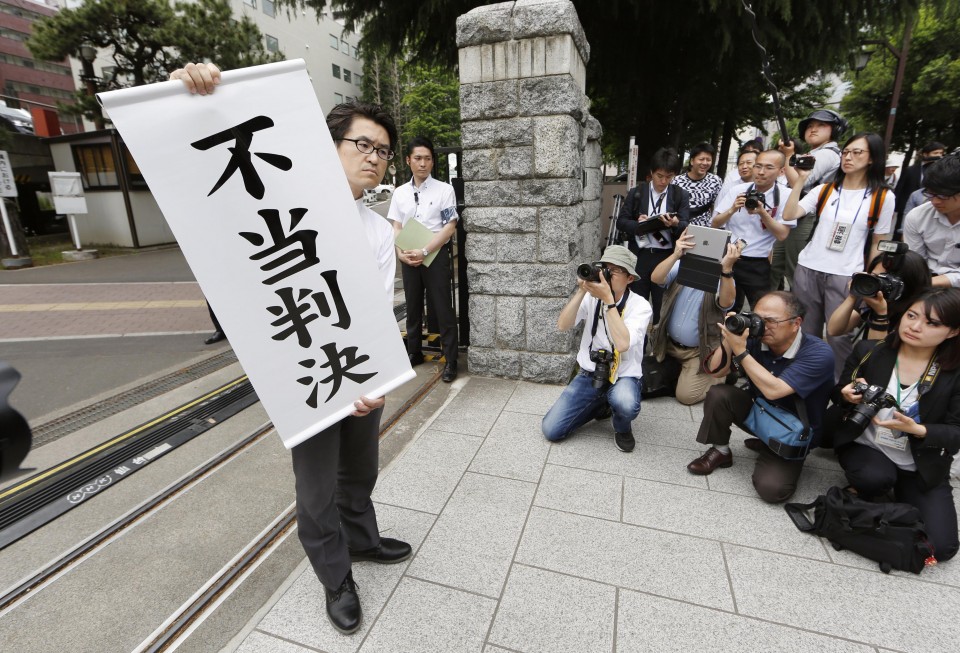 (Photo shows a lawyer holding a banner that reads "unjust ruling" in front of the Sendai District Court on May 28, 2019, after the court rejected a damages suit against the state over forced sterilization.)

In the trial, the plaintiffs and lawyers said the 1948 eugenics law that deprived the victims of self-determination with regard to giving birth and raising children violated the Constitution, which guarantees the pursuit of happiness and equality under the law.

They said the state failed to take legislative action to compensate the victims, but the government argued it had no obligation to do so as the victims could seek damages under the state compensation law.

The state also said it was not obliged to pay compensation due to the 20-year statute of limitations on demands for damages under the Civil Code, pointing out that the victims underwent surgery more than 40 years ago.

The district court upheld the government's claims regarding legislative action and the statute of limitations.

"My life has lost all meaning," the plaintiff in her 70s told reporters following the court decision.

"The ruling was totally unexpected," said Koji Niisato, the plaintiffs' lead lawyer. "We feel indignant. We'd like to appeal after consulting with our clients."

A sister-in-law of the plaintiff in her 60s said, "My sister suffered as her rights were violated due to the surgery. The court decision to reject (the damages claim) is incomprehensible."

Health, Labor and Welfare Minister Takumi Nemoto declined to comment on the ruling, saying only that he will study it.

Between 1948 and 1996, the eugenics law authorized the sterilization of people with intellectual disabilities, mental illness or hereditary disorders to prevent births of "inferior" offspring.

About 25,000 people with disabilities were sterilized under the eugenics protection law, including around 16,500 who were operated on without their consent, according to the health ministry and the Japan Federation of Bar Associations.

In April, Japan's parliament enacted legislation to pay 3.2 million yen in state compensation to each person who underwent forced sterilization, irrespective of whether they were believed to have agreed to undergo surgery or not.

Prime Minister Shinzo Abe issued a statement expressing regret and an apology, but he did not mention the legal liability of the state.

Some victims are suing the government for greater compensation.