Taito City, the heart of Edo-era shitamachi culture in Tokyo, hosts some of the Japanese capital's largest and most celebrated traditional summer festivals and events, but it's a matsuri with a much more local flavor that signals their impending arrival.

The Shitaya Jinja Taisai, which took place over the weekend of May 10 - 12 this year, is based around a Shinto shrine of the same name tucked away a few blocks east of Ueno Station, in the neighborhood of Shitaya.  The annual matsuri may not grab the headlines or make the "top ten" Japanese festival lists like other Taito City events but for shitamachi residents its arrival is eagerly anticipated.

"Maybe it's just a saying, but it's said that festivals of Edo (the former name of Tokyo) begin with Shitaya," local resident Ryo Miyazawa told us during our visit on the festival's final Sunday.

"Of course, the people of Shitaya look forward to it but also people in the neighboring towns.  For them, when the Shitaya festival starts they know that their turn is coming soon. They've known this since they were children.  Even the people behind Sanja Matsuri think like this," he said in a nod to one of Tokyo's largest matsuri.

And people here have been looking forward to Shitaya Jinja Taisai for a long time with the festival dating back to the shrine's founding in 730, the second year of Japan's Tenpyo Era.

Over 1,300 years on though, this year's festival took on added significance as not only the first of the summer for Taito City but also the first of the shitamachi festivals to take place in the new Reiwa Era, after Emperor Naruhito's accession to the throne on May 1.

Normally on odd-numbered years Shitaya Jinja Taisai is held in its "kage matsuri" form, reserved only for the mikoshi -- portable shrines to transport the local deity -- of the area's neighborhood associations.  The shrine's main mikoshi is aired only on even-numbered years in a potential nod to the Japanese folk culture of "hare" and "ke," a separation of the ceremonial and the everyday respectively.

This odd year though, 2019 or Reiwa 1, is anything but "everyday" and accordingly all 29 of Shitaya's neighborhood associations brought out their mikoshi in celebration of the new era.

Festivities began on Friday, when the chief priest of Shitaya Jinja paid a visit to all of the associations in order to bless their mikoshi before they were paraded on Saturday around their neighborhoods, bringing good fortune to local residents and businesses.

On the Sunday, we looked on as the 29 mikoshi, and their respective 200 to 300 bearers, came together to line up along the broad Asakusa-dori, awaiting their turn to approach the entrance to Shitaya Jinja in a crescendo of festive cries and dramatic lunges, to be blessed by the chief priest.

"It's been decades since we've seen all of the districts come together like this," explained Miyazawa.

"Usually, towns that are close to a shrine will carry their mikoshi to that shrine but those located further away, most of them don't bring their mikoshi as far as Shitaya Jinja.  To see all of them like this, it really is quite historic."

It was also a chance for the more astute observer to pick out the differences and painstaking details of each of the mikoshi, something which Miyazawa encouraged us to do.

"Each mikoshi, in terms of the design, decoration, the color of the rope, is different," he said as he guided us through the thickening festive foot traffic.

"For example, the warabite (the decorative flourishes of the mikoshi roof’s four corners), which typically features a bird, you can see one here that features a dragon instead. This is something that people should try to look out for."

In the heat and the typically feverish matsuri atmosphere though -- with many festival goers already in high spirits despite the early hour -- it might have been easy and forgivable to have missed some of the finer nuances.  Besides which, the historic coming together was spectacular enough in its entirety, a colorful column of revelry and scale that belied our idea that the festival was going to be a local, intimate affair.

In fact, despite being stopped every few yards to be greeted by familiar faces, Miyazawa estimated that maybe half the participants had come from outside of town -- fans of Japan's traditional matsuri, friends of local residents.  We even passed a group of foreigners awaiting their turn to share the burden of a mikoshi's bulk. Some 500 kgs of it. ("Not so heavy," Miyazawa casually remarked.)

"If you come through people that you know, then anyone is welcome to take part.  Christian, Muslim, it doesn't matter.  Japan's kami are tolerant so as long as people want to take part, they are welcome to do so."

Perhaps next year then we'll don a hanten (a traditional Japanese overcoat often worn during festivals like Shitaya Jinja Taisai) and share the load of the shrine's main mikoshi. Or maybe we'll just watch from a safe distance.  It's something to look forward to either way. The locals certainly are.

"In terms of our own feelings, after the matsuri finishes, the next day we start thinking about the next year's festival," said Miyazawa.

In the meantime though, Shitaya Jinja Taisai was just the beginning of another summer of spectacular matsuri and festivals coming up in Tokyo's Taito City.

Here are some of the best to look out for in 2019 (For a full list of authentic experiences in Taito City visit https://authentic-tokyo.com/event/): 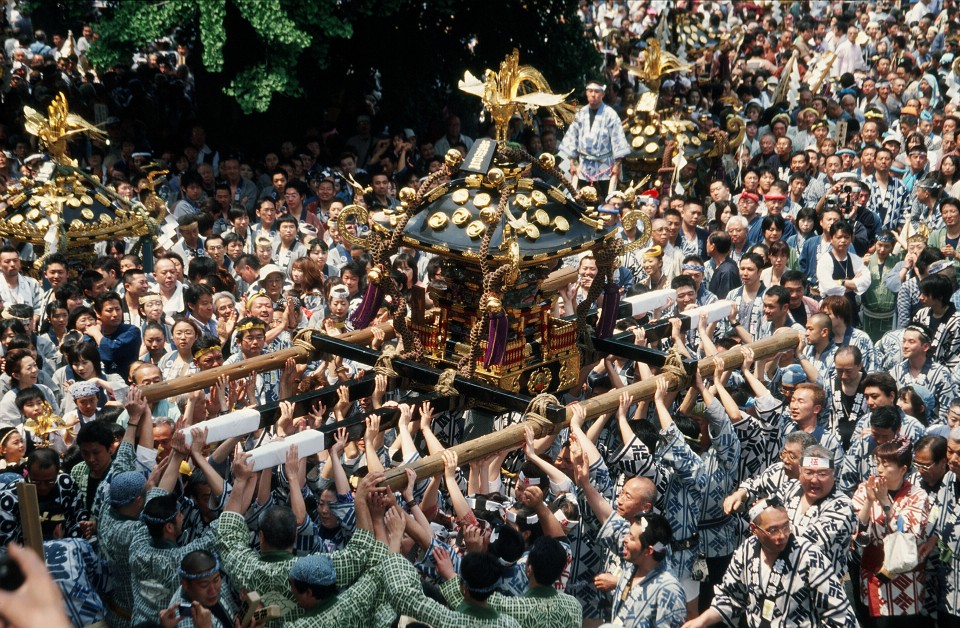 One of the largest and most important of Tokyo's traditional festivals, the annual Sanja Matsuri, over the course of its three-day duration, regularly sees nearly two million visitors turn out on the streets of Asakusa to celebrate the three founders of Sensoji, the oldest temple in Tokyo.

Despite a reputation for getting a little rowdy, Sanja Matsuri celebrations begin on Friday with the moving Daigyoretsu, a parade of priests, geigi (more commonly known as geisha), dancers and dignitaries which breaks out into a haunting chant on its approach to Asakusa Jinja.

On Saturday, the festival gets into feverish gear when around 100 mikoshi from the local neighborhoods are carried to the entrance of Sensoji for purification.

Sanja Matsuri comes to a frenzied climax on the Sunday when three large mikoshi, carrying the spirits of the three founders, are paraded around Asakusa. 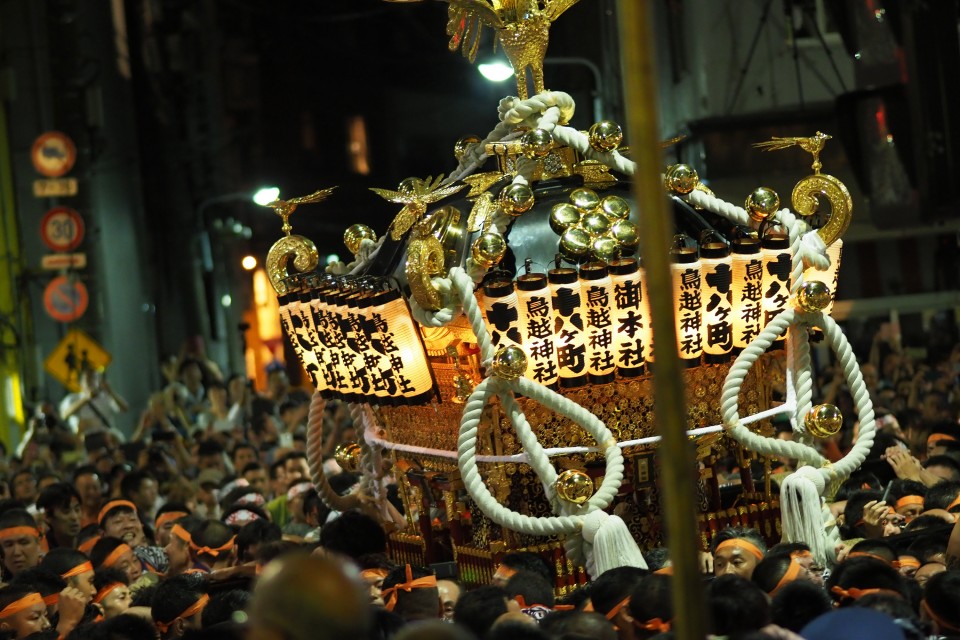 The annual festival of Torikoe Jinja, a Shinto shrine in southern Taito City, boasts the heaviest mikoshi in Tokyo, a near four-tonne sengan-mikoshi.  On the festival's final day locals take up the strain to carry the giant mikoshi in a parade lead by people dressed as, among others, Sarutahiko, the Shinto deity often depicted with a ruddy face and comically long nose.

Be sure to stick around beyond sunset for the lantern-lit Torikoe Night Festival, the moving showpiece of the event, during which the giant mikoshi is returned to Torikoe Jinja. 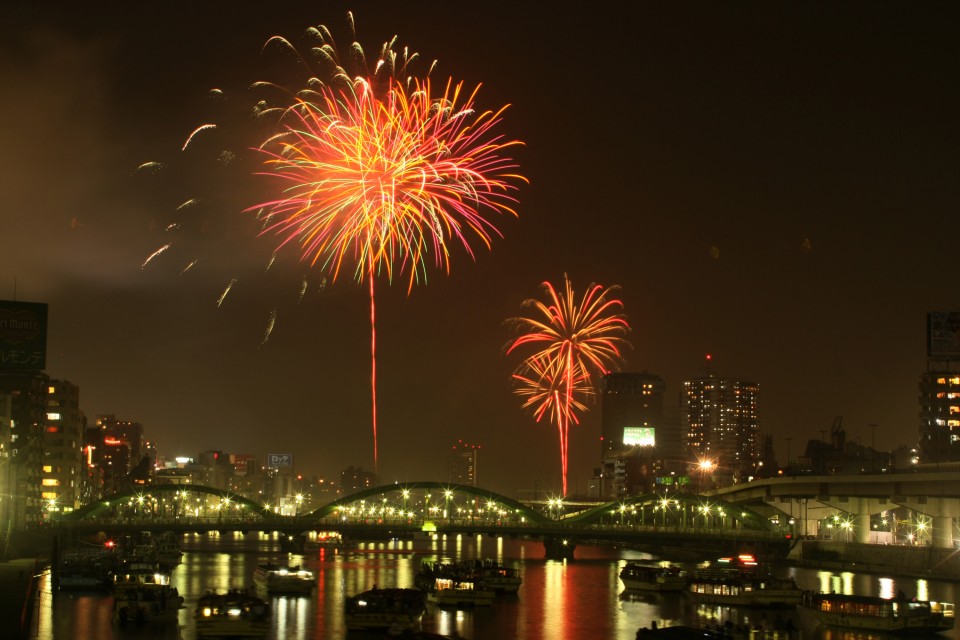 Close to one million onlookers turn their attention to the skies for Tokyo's largest fireworks, or hanabi, extravaganza which launches the pyrotechnics from two points on the Sumida River.

Despite the riot of color produced by around 20,000 rockets, Sumida River Fireworks Festival is actually rooted in something rather sombre.  The event dates back to 1733 when the shogun at that time, Tokugawa Yoshimune, called for the organization of the Water God Festival to honor the souls of those people who perished from famine, and a resulting plague, the previous year. Something to remember amidst the collective "Oohs," and "Aahs," emitting from onlookers at the sight of anime characters and remarkable shapes created in firework form. 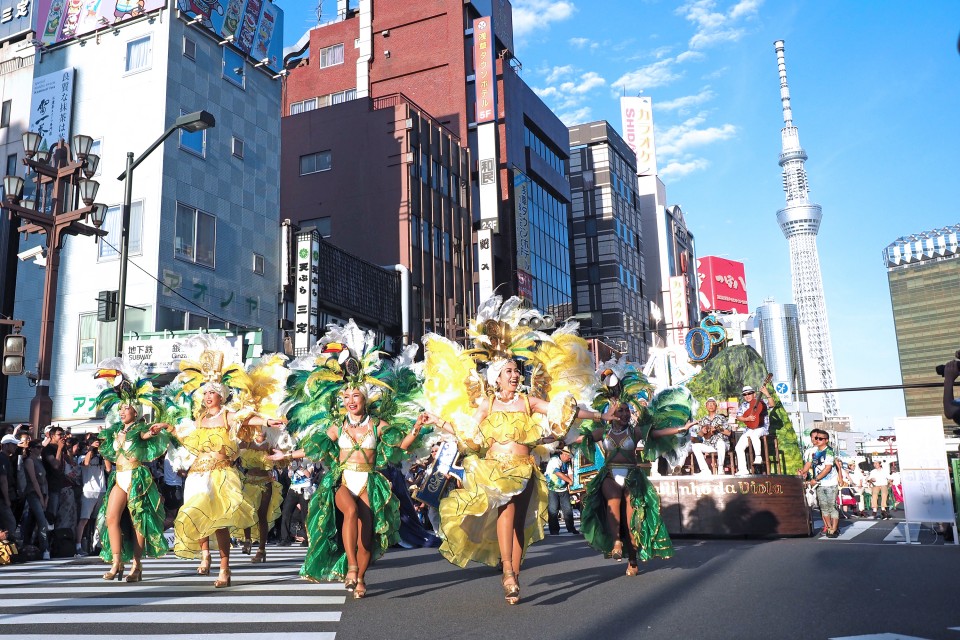 Seen by many as the traditional curtain-closer for the season of summer festivals in Taito City, the Asakusa Samba Carnival emphatically ensures that the season goes out in some style.

With visitor numbers to the samba carnival regularly topping half a million, the streets of Asakusa are crowded with people straining to catch a glimpse of passing samba collectives swinging their hips in spectacular costumes, accompanying even more spectacular floats, for a contest modelled on the samba parades of the carnival in Brazil's Rio de Janeiro.

While Taito City's old-town shitamachi streets might seem far removed from Rio's Sambodromo, the Asakusa Samba Carnival reflects a long history of emigration between Japan and Brazil and is the largest event of its kind to be held in the Northern Hemisphere.

This article was supported by "Visit Authentic TOKYO," presented by Taito City