Empress Masako wore a long white dress and a tiara Wednesday as she stood by her husband Emperor Naruhito, who delivered his first speech before representatives of the public in a ceremony to mark his ascension to the throne.

The empress, 55, donned a floor-length white V-neck dress with short sleeves, a tiara and necklace. She also wore elbow-length white gloves and a red-trimmed yellow sash.

The 59-year-old emperor, who ascended the throne following Tuesday's abdication by his 85-year-old father former Emperor Akihito, stood on the dais, wearing a black tailcoat, white tie and a number of decorations that mark his status. He also wore a red sash beneath the jacket.

Members of the imperial family stood on both sides below the platform. 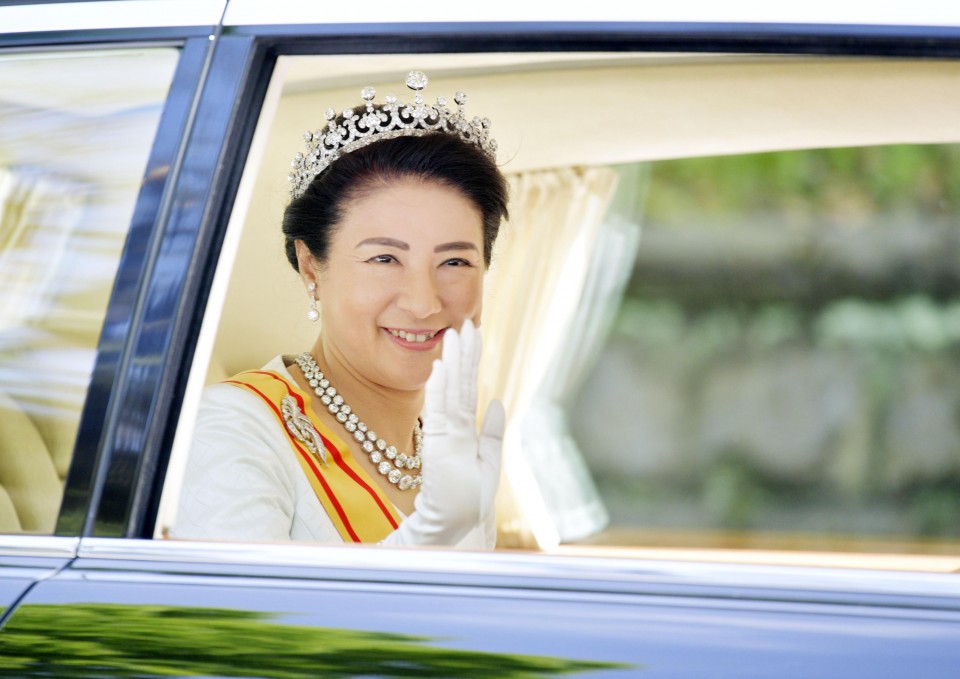 Crown Prince Fumihito, 53, the younger brother of Emperor Naruhito, was on the emperor's right side in a black suit, while his wife Crown Princess Kiko, 52, and daughters Mako, 27, and Kako, 24, similarly all wore long white short-sleeve dresses, tiaras, necklaces, white gloves and sashes.

Former Emperor Akihito's brother Prince Hitachi, 83, and Princess Yuriko, 95, widow of the late Prince Mikasa, who was the retired emperor's uncle, were seated on the left in wheelchairs. He wore a black suit, while she donned a light green floor-length long-sleeve dress.

The princess is the oldest living member of the imperial family.

Former Emperor Akihito stepped down midnight Tuesday, bringing an end to the Heisei Era spanning his 30-year reign. The enthronement of his son marked the commencement of the new Reiwa Era, which the government translates as "beautiful harmony."