Overnight leaders Kakuryu and Tochinoshin fell into a three-way tie with rank-and-file grappler Asanoyama following their upset losses at the Summer Grand Sumo Tournament on Sunday.

The joint leaders sit at 7-1 after lone grand champion Kakuryu was stunned by No. 3 maegashira Tamawashi and sekiwake Tochinoshin fell to No. 2 Endo at Ryogoku Kokugikan. 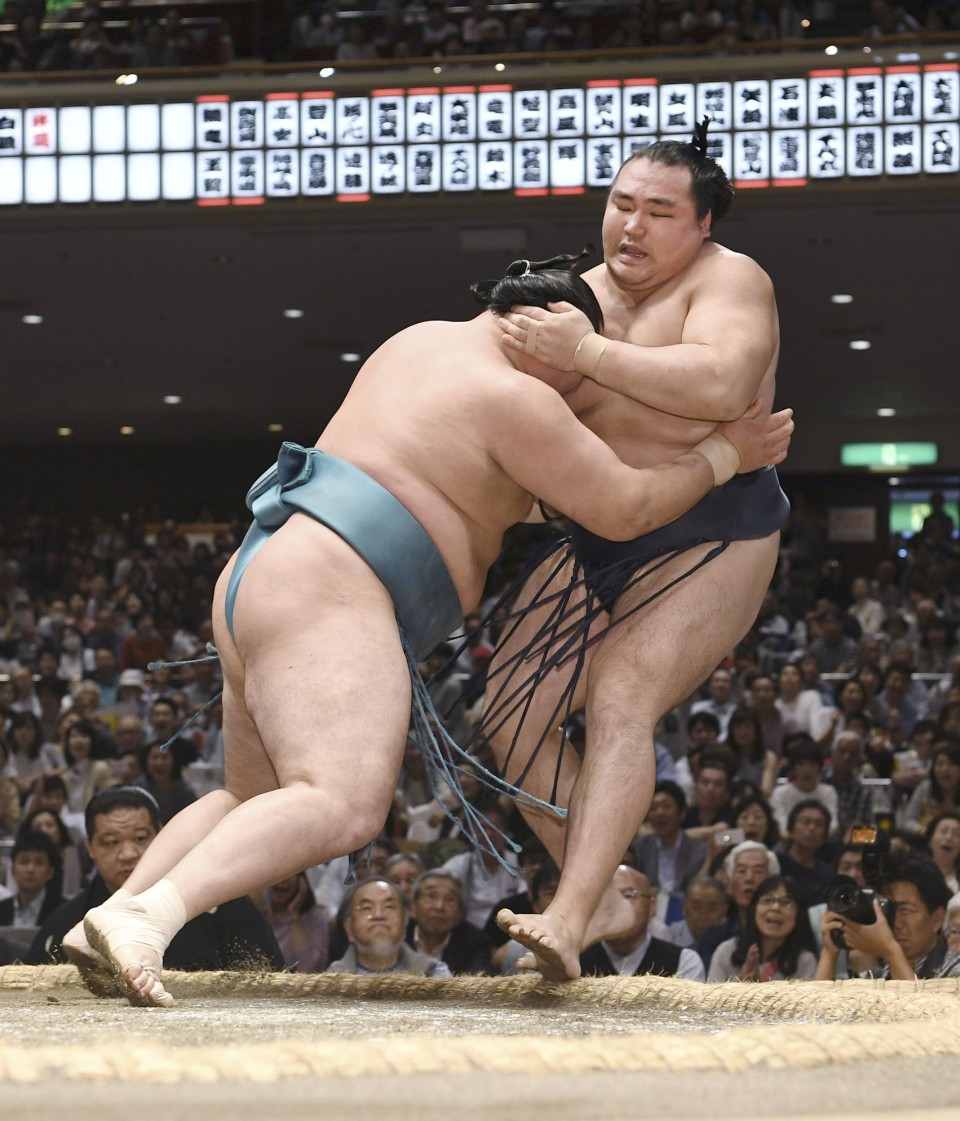 No. 8 Asanoyama maintained his momentum at the 15-day tournament by pushing out No. 6 Takarafuji (4-4).

Newly promoted ozeki Takakeisho, meanwhile, returned with a loss against komusubi Aoiyama after missing three days with a knee injury.

Following two restarts, Tamawashi established a strong position at the jump, thrusting his hands to the chest of Kakuryu. Keeping low, he drove the yokuzuna back and out. 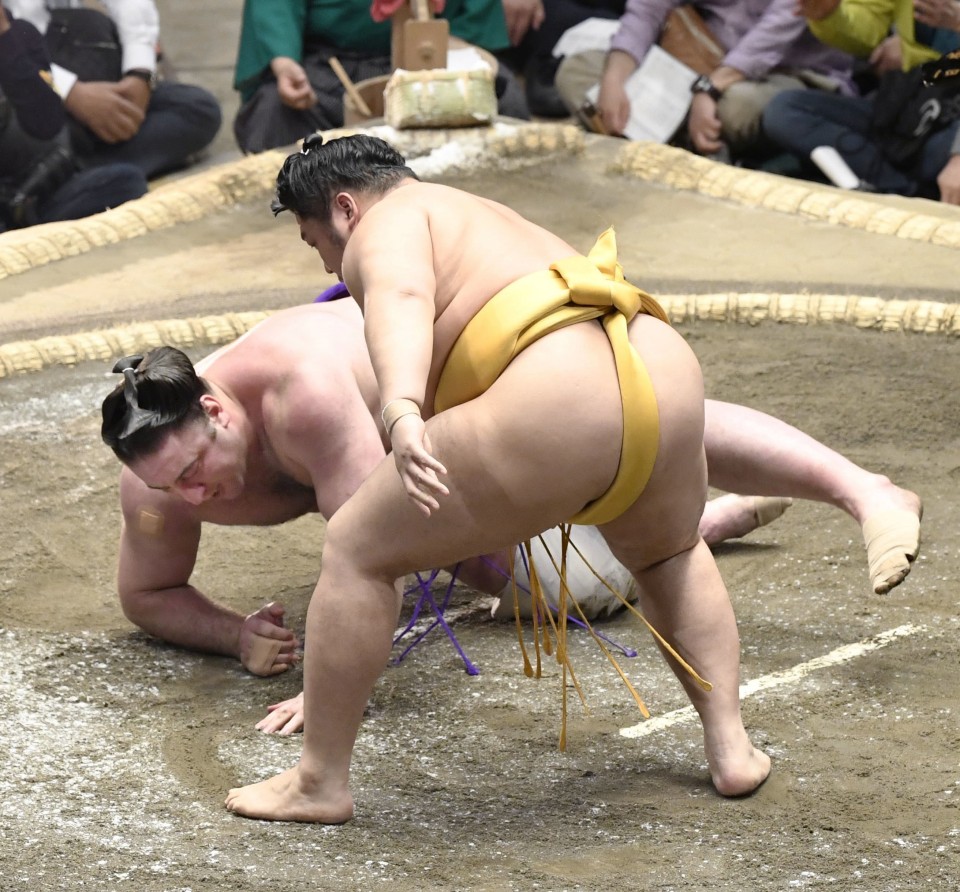 "I just went all out and got the victory," said Tamawashi, who won his first top-level title in January.

"I think the main thing is that my sumo was good today. I wanted to come back strong here in this May tournament. I just want to take it one match at a time and enjoy it."

Tochinoshin, who needs at least 10 wins here to regain his ozeki ranking in July, hit a hurdle when he was thrown to the clay by No. 2 Endo (3-5).

Following a heavy collision, Endo blocked Tochinoshin's attempt at an outside belt grip before twisting him off his feet.

The Georgian was demoted from sumo's second-highest rank after failing to win eight bouts in the past two tournaments.

Twenty-two-year-old crowd favorite Takakeisho fought with heavy strapping around the right knee he injured in his Day 4 win over Mitakeumi.

As Takakeisho (3-3-2) leapt off the mark, Aoiyama (2-6) stepped to the side and slapped the ozeki to the clay for his first win in four head-to-head meetings. 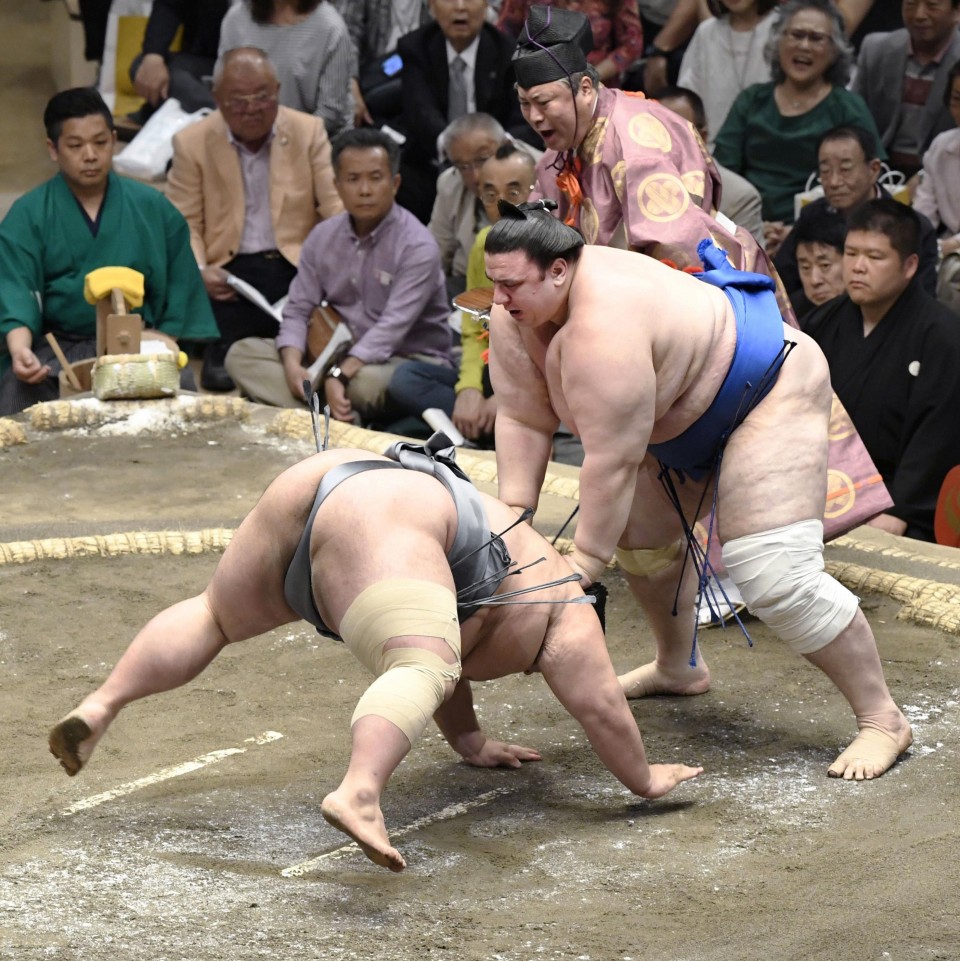 Ozeki Takayasu improved to 5-3 after forcing out No. 4 Okinoumi (2-6) in workmanlike fashion. Following the opening collision, the pair locked up in the center as each searched for a grip. After a long pause, Takayasu used his superior strength and leverage to dislodge his lower-ranked opponent.

Fellow ozeki Goeido also advanced to 5-3 by beating komusubi Mitakeumi (5-3). The komusubi seemed to have the momentum, driving Goeido backward, but he was unable to force out the ozeki after inadvertently pushing him into the referee at the edge of the ring.

Having secured a two-hand grip, Goeido seized his opportunity and forced Mitakeumi out backwards.

Mongolian sekiwake Ichinojo (2-6) withdrew with a right leg injury, forfeiting his Day 8 bout against No. 1 Kotoshogiku (3-5). The largest man in the division at 227 kilograms, Ichinojo will be out for the remainder of the tournament, according to his Minato stable.