Grand champion Kakuryu and sekiwake Tochinoshin each won on Day 5 of the Summer Grand Sumo Tournament on Thursday to retain his share of the lead.

The only other top-division wrestler to remain undefeated after five days of action is No. 8 Asanoyama.

In the absence of fellow Mongolian yokozuna Hakuho, the 33-year-old Kakuryu remains on target for a sixth title following the withdrawal of up-and-comer Takakeisho and other troubles among the ozeki-ranked fighters.

Challenging that bid is Tochinoshin, who hit the halfway mark toward regaining his ozeki status after beating top-ranked maegashira Hokutofuji (1-4). The Georgian can earn a promotion back to sumo's second highest rank if earns at least 10 wins in the 15-day competition. 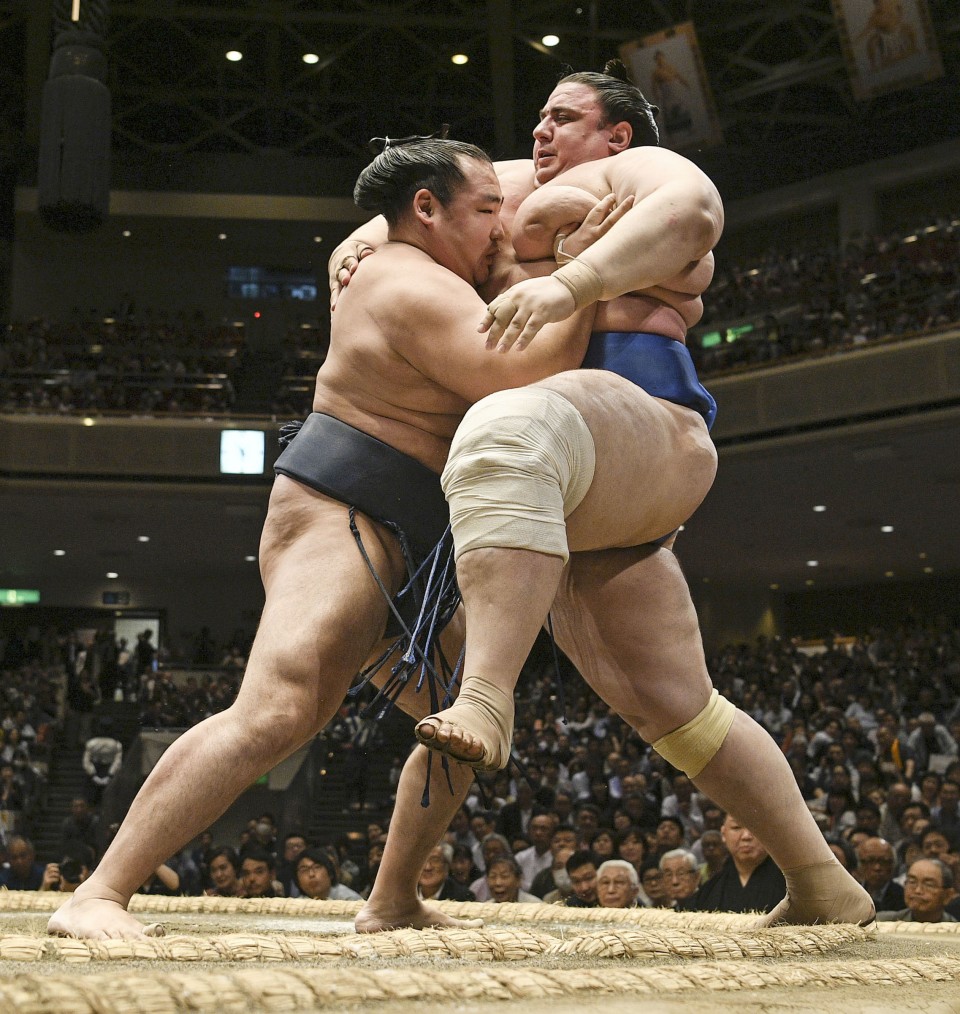 The win lifted Tochinoshin to 3-3 in his career against Hokutofuji, who had beaten him in their last three bouts.

Tochinoshin did a good job of forcing Hokutofuji to the edge of the ring after their initial clash while grappling for his favored grip. After latching onto Hokutofuji's belt, Tochinoshin outmuscled Hokutofuji as they labored on the straw.

"I didn't think about my troubles against him, but focused on doing what I do best," said Tochinoshin, who has not won 10 bouts at a tournament since last May. "It's been a while since I've been able to deliver this kind of sumo."

Sekiwake Ichinojo (2-3), in contrast, took a third loss after getting pushed out by komusubi Mitakeumi (3-2). The 227-kilogram Mongolian put up little fight against the former sekiwake and allowed himself to be calmly handled out.

The troubles also continued for Goeido (3-2) as he suffered his second upset of the meet, leaving the ring in frustration after a quick defeat against No. 2 Daieisho (3-2). The ozeki was unable to get a hand in edgewise as he was bulldozed out and fell further behind the leaders.

Takayasu, meanwhile, dodged a bullet against No. 3 Chiyotairyu and improved to 3-2. Chiyotairyu got the better of the initial clash and sent the ozeki back in a flurry of thrusts, but Takayasu slipped to the side and pulled the rank-and-filer to the clay for a textbook slap-down win.

Takakeisho's bid to claim the Emperor's Cup in his ozeki debut ended prematurely after he decided to pull out of the 15-day tournament with a right-knee injury prior to Thursday's action. He forfeited his scheduled bout against No. 3 Tamawashi (2-3) and fell to 3-2.

The 22-year-old, who hurt the knee upon collecting a third win in Wednesday's bout against komusubi Mitakeumi, will be forced to fight in July's meet in Nagoya as a demotion-threatened "kadoban" ozeki should he sit out the entire tournament and fail to post eight wins.

Among the lower-ranked wrestlers, Asanoyama defeated No. 10 Kagayaki (1-4) to remain among the top division's undefeated. The Takasago stable wrestler drove Kagayaki to the ring's edge before sending his opponent down to the clay with a beltless arm throw.