Jiro Hamasumi, in utero when the United States dropped the first atomic bomb on Hiroshima in 1945, told the United Nations on Wednesday he and other survivors will persist with their efforts to spare future generations the suffering caused by nuclear weapons.

"The hibakusha, whose average age has exceeded 80 years old, have endeavored to create a world without nuclear weapons in our lifetime, so that future generations will be free from the fear of having another hell on earth," he said in a speech.

He was speaking at the third and final session of the preparatory committee for the 2020 review conference of the Nuclear Non-Proliferation Treaty that got under way on Monday and ends next Friday.

The Japanese word "hibakusha" is used to describe those who were exposed to fallout from the atomic bombs. While the first bomb was dropped over Hiroshima on Aug. 6 in the closing days of World War II, three days later Nagasaki, a city in Kyushu, suffered the same fate.

As assistant secretary general of the Japan Confederation of A- and H-Bomb Sufferers Organizations, Hamasumi was speaking along with the mayors of Hiroshima and Nagasaki as well as an activist from the Japan Council against Atomic and Hydrogen Bombs, known in Japanese as Gensuikyo, and other members of civil society. 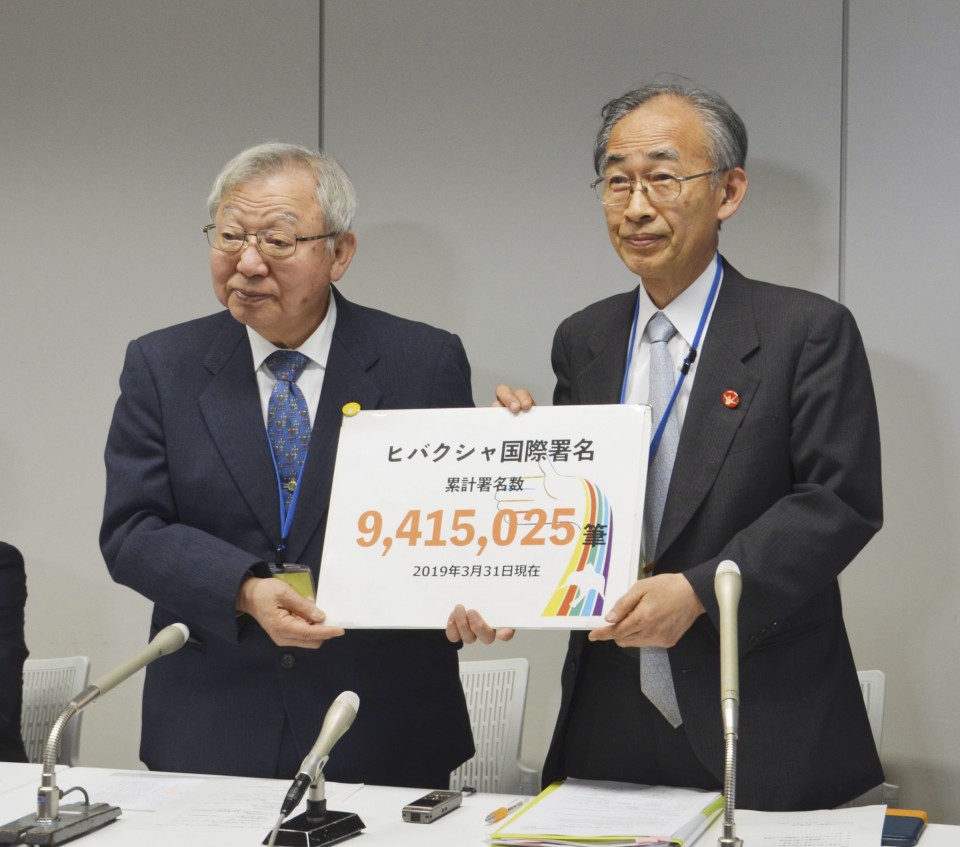 Hamasumi recalled growing up looking at the portrait of his father, who had died in the initial blast, and the hardships his mother faced while raising seven children by herself.

He is among an estimated 7,200 hibakusha whom he said were exposed in utero through their mothers. Despite living with fears about his health and the welfare of his family, he has committed to pursuing a world free of nuclear weapons.

"We believe it is the mission of the hibakusha, as well as that of each and every one of the adults all over the world, to hand down the blue and clear sky free of nuclear weapons and wars to our children in the world," he added.

The discussions are viewed as a critical step in setting the tone for what can be expected to be achieved at the five-year review of the NPT Treaty, lasting roughly a month.

Next year will be the 50th anniversary of the treaty, which came into effect in 1970. This year's negotiations are taking place in an environment marred by heightened security challenges.

Against this backdrop, the United States and Russia in particular -- the two countries with the largest nuclear arsenals -- are increasingly at odds.

The situation was exacerbated in February when U.S. President Donald Trump announced Washington was withdrawing from its bilateral nuclear arms control treaty that dates back to 1987. The move was a response to alleged violations carried out by Moscow, stoking fears it may spark a new arms race involving other nations, such as China.

"We see disturbing trends, including the recent intention of the U.S. and Russia to terminate the INF Treaty," warned Hiroshima Mayor Kazumi Matsui, who also spoke at the conference.

He voiced concerns about a global security system that remains based on the doctrine of nuclear deterrence and nuclear-armed states that keep modernizing their arsenals.

Nagasaki Mayor Tomihisa Taue raised concerns about the approximately 14,500 nuclear warheads in the world, and called on leaders of nuclear-armed states to do more to live up to the promise of reducing their arsenals.

"Please work in better faith for nuclear arms reductions in keeping with the promise you have with the world under the special status afforded you in the framework of the NPT," he said, adding Moscow and Washington have a "responsibility to initiate a dialogue."

After the session, Nagasaki survivor Sueichi Kido, secretary general of the Japan Confederation of A- and H-Bomb Sufferers Organizations, presented about a petition -- calling for the elimination of nuclear weapons -- with 9.4 million signatures to Malaysian Ambassador Syed Mohamad Hasrin Aidid, chair of the session.

Called the Hibakusha Appeal, it was last presented in the fall of 2018 by Kido and Hamasumi to an ambassador who chaired a committee tackling disarmament and international security. At that time there were more than 8 million signatures.

"Listening to the hibakusha you can somehow feel the pain, but it is not the same, so we hope that the delegates listen to what they have been saying and work towards a world free of nuclear weapons," Aidid told Kyodo News after meeting hibakusha for the first time.