Speaking to reporters after a meeting in Washington, Suga said he briefed Pompeo about Prime Minister Shinzo Abe's intention to hold talks with North Korean leader Kim Jong Un -- without preconditions -- to try and resolve the issue of Pyongyang's abduction of Japanese nationals in the 1970s and 1980s.

Suga and Pompeo also agreed to jointly seek a swift resolution to the abduction issue, and to effect the full enforcement of U.N. sanctions on North Korea in tandem with the international community to force Pyongyang to give up nuclear weapons and ballistic missiles.

The two ministers discussed "our close alliance" and reaffirmed bilateral commitment to the final, fully verified denuclearization of North Korea, according to the State Department.

In a separate meeting, Suga -- the top government spokesman and close aide of Abe -- and acting U.S. Defense Secretary Patrick Shanahan, agreed to step up bilateral coordination in dealing with a nuclear-armed North Korea.

"We agreed to closely coordinate between Japan and the United States at various levels over analysis and responses," Suga said, in reference to Pyongyang's launches of what appeared to be two short-range missiles Thursday, as well as multiple projectiles -- including one believed to be a short-range ballistic missile -- last Saturday. 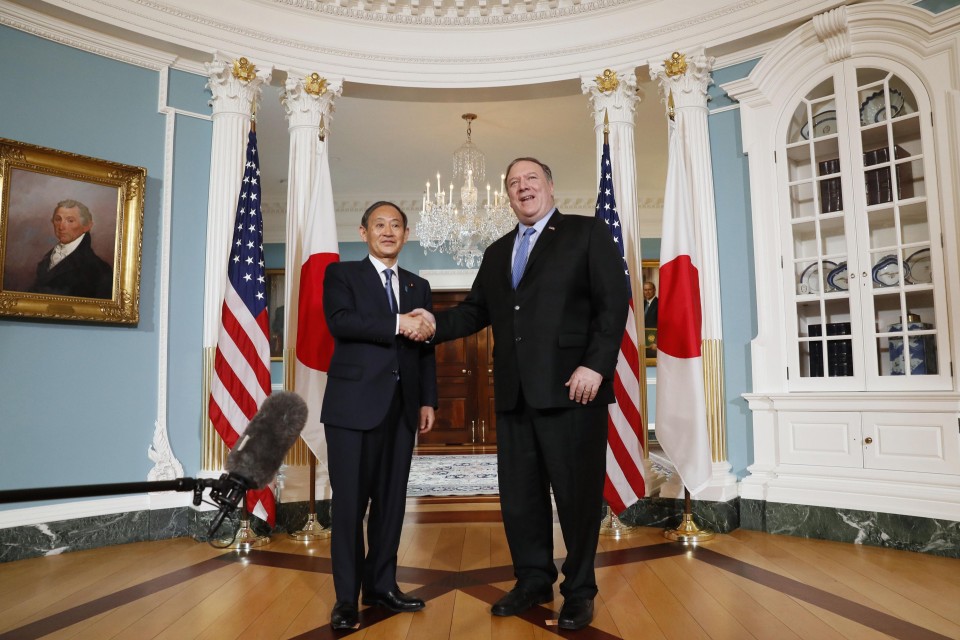 The Pentagon has confirmed that Thursday's projectiles were ballistic missiles, according to a U.S. government official.

At the meeting, Suga and Shanahan also agreed to promote a planned relocation of U.S. Marine Corps Air Station Futenma within Okinawa Prefecture, as part of the realignment of American troops in Japan.

"The Japan-U.S. alliance is the cornerstone of the peace and prosperity of the Indo-Pacific," Suga said. "Japan, through increased defense capabilities, will contribute to strengthening deterrence and response capabilities of the alliance."

He affirmed with Pompeo and Shanahan the stepping up of preparations for President Donald Trump's state visit to Japan in late May, and in their joining hands to realize a free and open Indo-Pacific.

On Friday, Suga -- who is in charge of the abduction issue and measures to reduce Okinawa's burden in hosting the bulk of U.S. military facilities in Japan -- will meet U.S. Vice President Mike Pence at the White House.

Suga's three-day visit to Washington and New York through Saturday will include a Friday symposium on the abduction issue at the U.N. headquarters, and a meeting with financial and business leaders in New York.

It is rare for a chief Cabinet secretary, who is responsible for crisis management, to leave Japan. Suga's last official overseas trip was to Guam in 2015.