Many Japanese celebrated the start of the Reiwa Era on Wednesday with their family, friends and loved ones, some with newborn babies, as Shinto shrines and famous spots across the country were crowded with visitors trying to take in the festive atmosphere.

A spate of events were held to welcome Reiwa, translated by the government as "beautiful harmony," while retailers offered "fukubukuro" lucky bags that are normally sold to celebrate a new year and goods related to the new era.

Some 1,500 residents formed a human representation of the two Chinese characters meaning Reiwa in the southwestern city of Dazaifu, Fukuoka Prefecture, where plum-blossom viewing that inspired the era name took place in the eighth century. 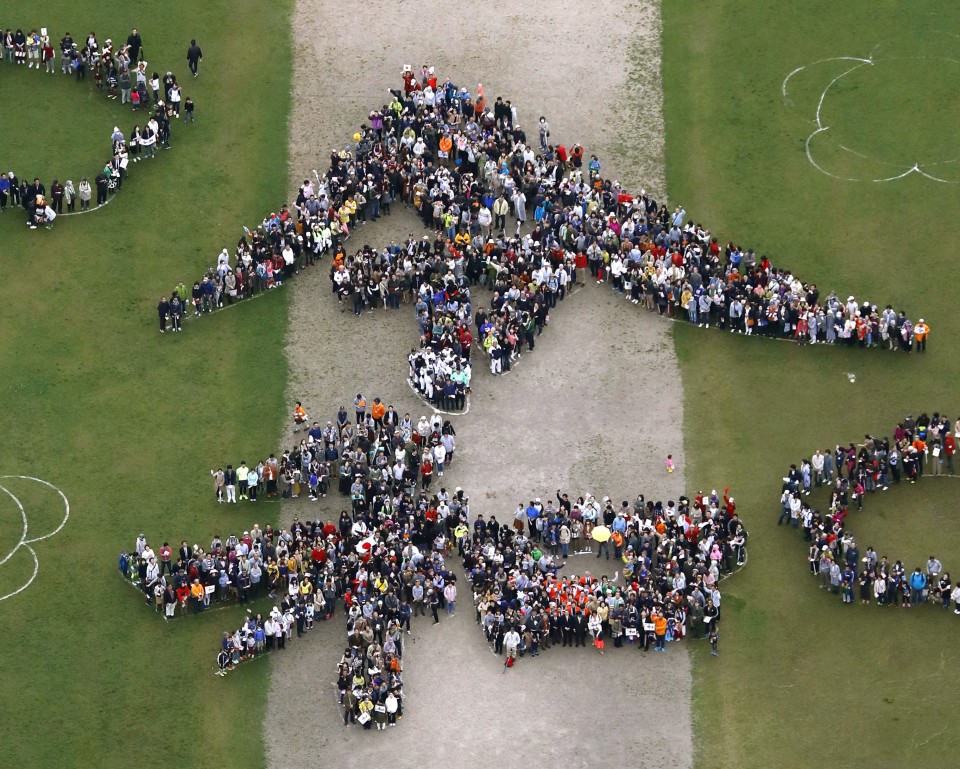 It took more than an hour for them to form the characters, each of which measured 30 meters by 30 meters.

"I feel lucky to be part of the celebration," said Hiroshi Nabeshima, 68, who traveled from the nearby city of Fukuoka to join in.

At Ise Jingu, a Shinto shrine in Mie Prefecture, central Japan, people started lining up from early morning to receive traditional Japanese sweets called rakugan that were given out in celebration of Emperor Naruhito's enthronement.

The shrine, which prepared about 40,000 boxes of rakugan, is dedicated to the Shinto sun goddess Amaterasu, from whom the imperial family is said to be descended.

Emperor Naruhito ascended the Chrysanthemum Throne on Wednesday, after his father, the former Emperor Akihito, abdicated the previous day.

In Osaka's Dotombori district, mechanical drum-playing doll Kuidaore Taro, which is a famous landmark mascot, welcomed visitors with a speech bubble that read, "I hope Reiwa will make good days" in English.

Katsuyoshi Goto, 48, on a family trip from Gifu Prefecture, was taking photos of the doll. "I agree (with the message) because Heisei saw various natural disasters," Goto said.

As Japan ushered in the new Reiwa Era at midnight Tuesday, countdown events, fireworks and other festivities took place in various parts of the country. Police stepped up security on busy streets in anticipation of huge crowds as the era name change came in the middle of an unprecedented 10-day Golden Week holiday.

Crowds burst into cheers as the clock struck midnight at one of the world's busiest street crossings in Tokyo's Shibuya area, a hangout for young people for street parties in recent years, to mark the start of the new era.

Some couples chose the first day of Reiwa to get married while others welcomed newborn children.

"It does feel like a new era is beginning, not only for our daughter but for me and my husband," said Miho Negishi of Saitama Prefecture near Tokyo, after giving birth to her first baby Sakura at 7:37 a.m. "I want the three of us to spend the Reiwa Era happily and vigorously."

To catch the first sunrise of the new era, some headed to scenic places while others boarded a special flight from Tokyo's Haneda airport, although the weather was cloudy in many parts of the country.

In the coastal town of Kushimoto in Wakayama Prefecture, western Japan, hundreds of people flocked to Cape Shionomisaki, the southernmost point of the country's main island of Honshu.

Hankyu Travel International Co. in Osaka chartered a West Japan Railway Co. express train for tourists to view the sunrise off the cape, but clouds obscured the view.

"The weather is unfortunate, but I hope the new era will be a good period," said 54-year-old Tokyo resident Masami Oshiyama, who was on the train tour.

The Hanshin Department Store in Osaka held a celebratory event, serving wine for 100 customers to make a toast with glasses with a logo of the new era name.