"He told me we could talk as long as his two (German) marks allowed," said 73-year-old Ankie Spitzer. "'I love you from the bottom of my heart, and our daughter, too,' he said. Those are the last words I heard him speak."

In a muffled voice Spitzer revealed those final words she heard from her husband Andre calling from a payphone at the 1972 Munich Olympics athletes' village. A few hours later, Andre, a fencing coach with the Israeli Olympic team was swept up in the most infamous terror attack in Olympic history. 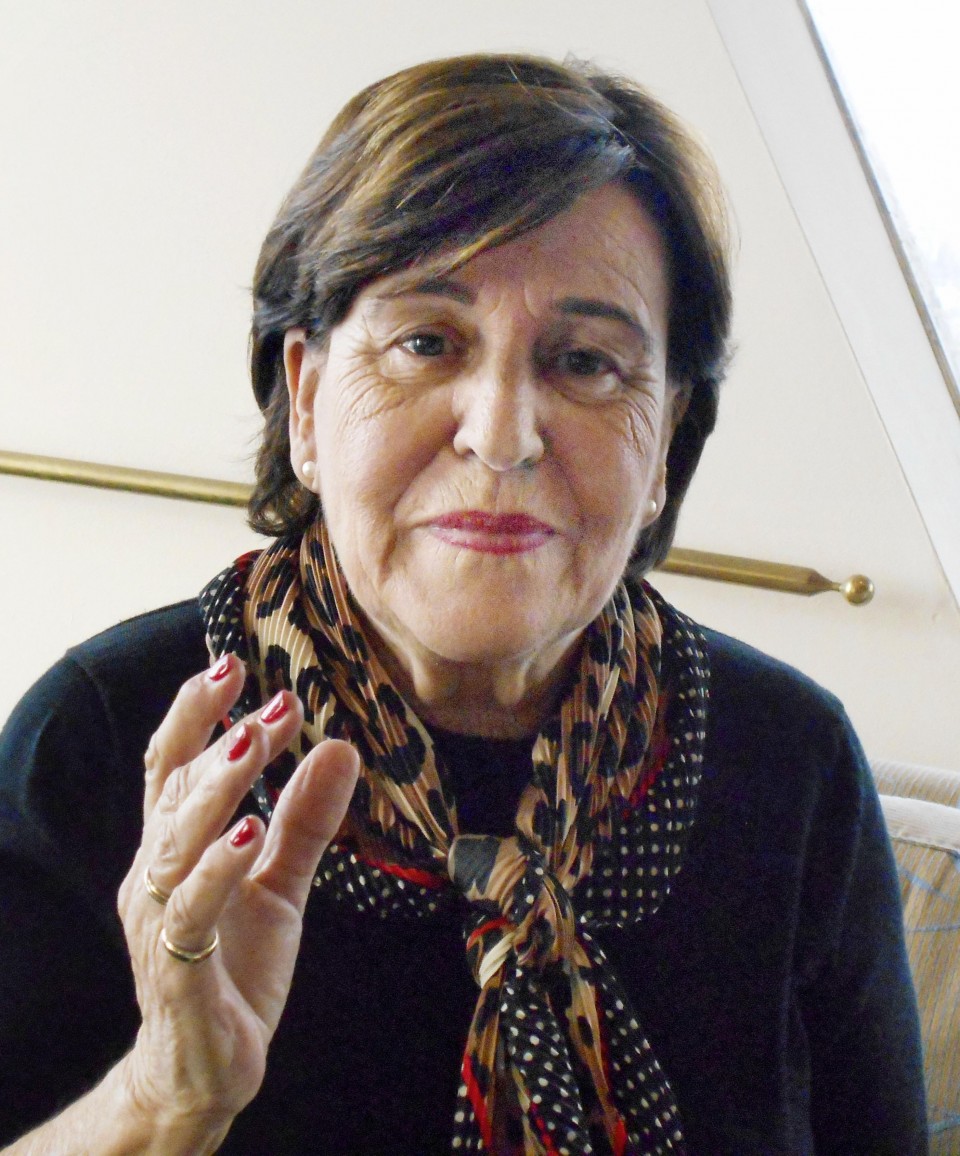 Just after 4 a.m. on Sept. 5, 1972, eight men wearing track suits and carrying bags, scaled the fence outside the athletes' village, looking for all intents and purposes like athletes returning from a late night on the town. The bags contained AKM assault rifles, pistols and hand grenades. Their owners belonged to the Palestinian guerrilla group "Black September," affiliated with the Palestinian Liberation Organization. The guerrillas' objective was the Israeli team's apartments at Connollystrasse 31.

Two members of the Israeli delegation were killed trying to resist, while the remaining nine who were present, including Andre, were taken hostage. The Olympic tragedy had begun.

The guerrillas demanded Israel free 234 prisoners -- most of whom were Arab terrorists -- but Israel's refusal made negotiations difficult. In the end, the guerrillas and hostages were taken at night by helicopter about 20 kilometers to an airbase, where they would ostensibly leave West Germany on a civilian airliner. German police, however, had hastily prepared an ambush. 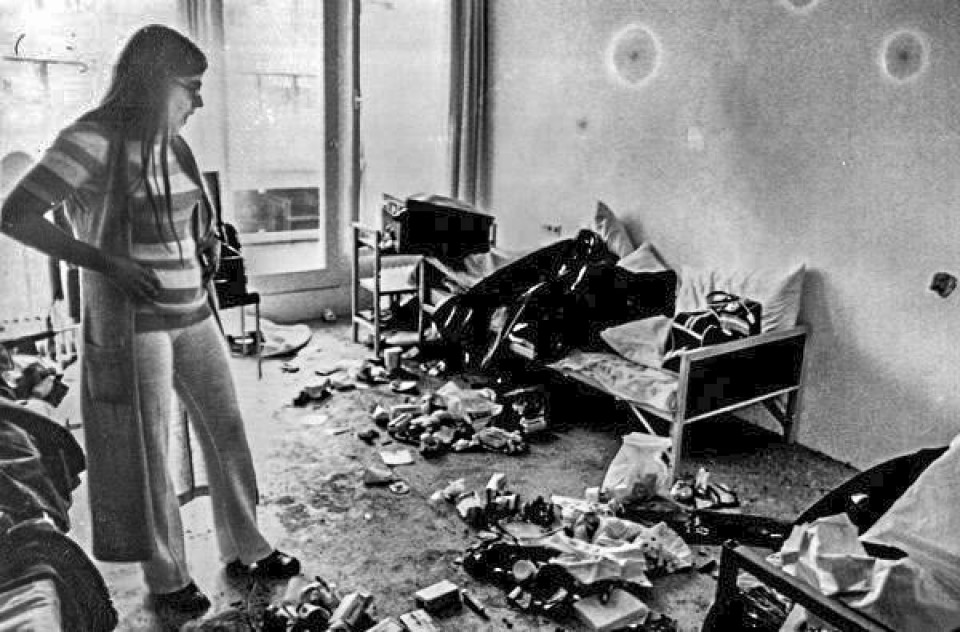 (Photo taken on Sept. 6, 1972 shows Ankie Spitzer standing in a room at the 1972 Munich Olympics athletes' village, one day after the guerrilla attack.)[Photo courtesy of Ankie Spitzer]

The rescue attempt, employing policemen untrained in such operations, was poorly planned. In the ensuing firefight, all nine hostages died inside the helicopters.

The International Olympic Committee held a memorial ceremony on Sept. 6, where the American president of the IOC, Avery Brundage characterized the attack as a threat to the Olympic movement that the IOC would not give in to. Brundage rejected calls to cancel the Olympics, saying, "The games must go on."

That day, Ankie traveled from her parents' home in the Netherlands to Munich and the athletes' village, to see where her husband had spent his final hours. Ignoring warnings not to go up to the scene, she climbed the bloodstained stairs and saw bullet marks in the walls. She found uneaten meals scattered and learned how inhumanly a body could be treated. The experience strengthened her resolve to tell people what happened.

Outside, athletes from different countries were training, leaving her in shock.

"What did that say about the Olympic spirit? Where is the peace, the love, the friendship?" she said.

For Ankie and Andre, Munich had been a "second honeymoon."

Ankie, a Dutch fencer, and Andre, a coach at the Netherlands' national fencing academy in her hometown of The Hague, fell in love and were married on July 4, 1971. They moved to Israel and their daughter, Anouk, was born the following year. 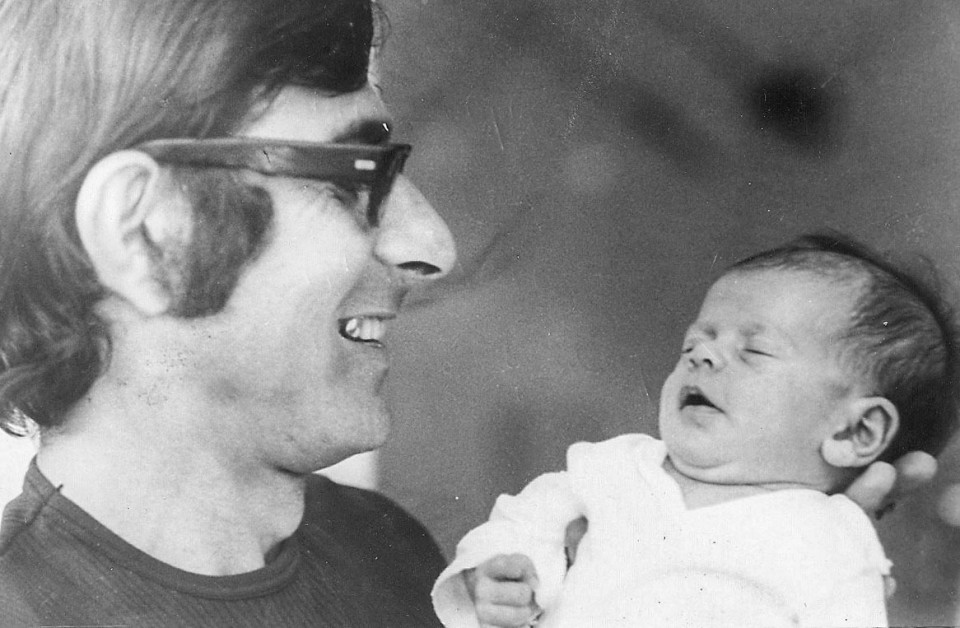 When their daughter was just five weeks old, Ankie left her in the care of her parents in The Hague and rented an apartment near the athletes' village. Andre would stay there with her and go to the village in the morning along with his wife. She was able to enter despite not having a pass by going through the facility's exit, where no one checked passes, "because it was Germany" she joked. There, people do not enter through the exit, so it was like a free pass.

One of her vivid memories was of them walking though the athletes' village and coming upon Lebanese fencers. The PLO was then using Lebanon as a base to attack Israel and relations between the two countries were extremely tense. Ankie was astonished when her husband approached them and struck up a conversation, asking them about their results in the competition.

"He told me, 'There are no borders in the Olympic athletes' village. To see the smiles on their faces, that is why I came here,'" she said of her husband's idealism at his first Olympics.

It was summertime in southern Germany. Athletes would go to Munich's beer halls at night, and return after hours by scaling the 2-meter fence. Everyone was rejoicing in their youth.

When Andre's events ended, the two traveled to The Hague, where Anouk had been hospitalized. Two days later, Andre returned to the athletes' village alone. As they were headed to the station, her husband said, "I want to kiss Anouk one more time," and they did a U-turn.

They drove back to the station from the hospital at a breakneck pace, allowing Andre to just barely catch his train. Andre disappeared through the door and that was the last she saw of her vivacious husband, who called from the athletes' village to tell her he had arrived safe and sound.

Had he missed the train, her husband might not have become a victim of terrorism.

"I led him to his death," Ankie said. "Regret and conflicted feelings have remained with me since."

Since then, Ankie and one other victim's wife have demanded the IOC hold an official memorial service, a minute of silence during an Olympic opening ceremony, so that the victims could be honored, their history remembered and the tragedy not repeated. Prior to the 2012 London Olympics, around 11,000 people, including then-President of the United States Barack Obama, signed a petition calling for that Olympic moment of silence. 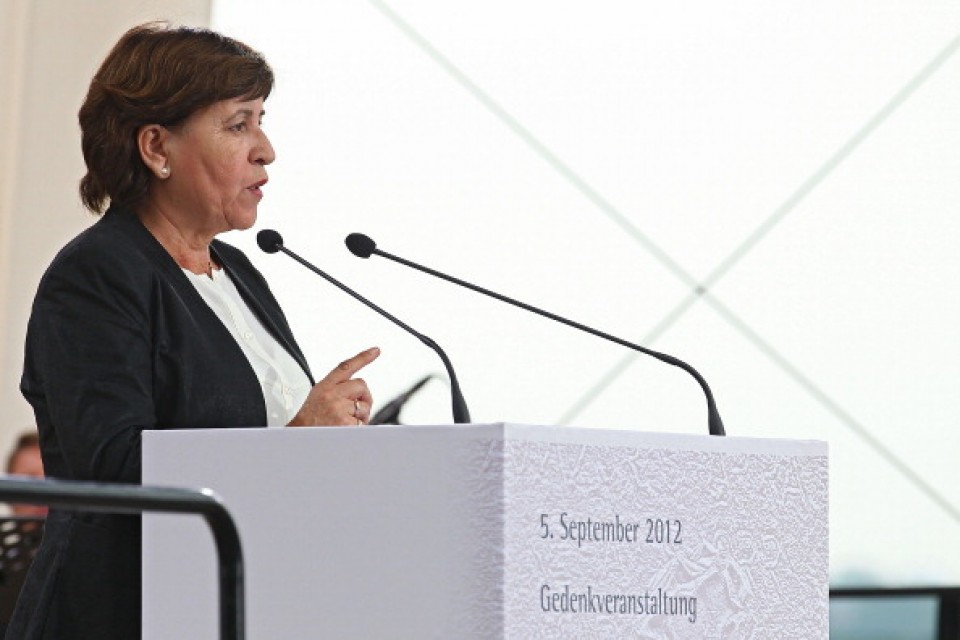 (Ankie Spitzer speaks during a memorial service commemorating the 40th anniversary of the 1972 Munich Olympics terrorist attack at the airport on Sept. 5, 2012 in Fuerstenfeldbruck, Germany.)[Getty/Kyodo]

Yet, the IOC continued to reject the proposal, rationalizing its inaction by telling her, "It would anger Arab nations" and "You are trying to bring politics into the Olympics."

In response to that, Ankie said, "No one is more political than the IOC. It's not like some traveler died while he happened to be at the Olympics. They should be treated as Olympians."

Things changed, however, with the election of Germany's Thomas Bach to the IOC presidency.

Prior to the start of the 2016 Rio de Janeiro Olympics, Bach took part in a mourning ceremony at the athletes' village. He read out the names of the 11 Israeli athletes and coaches who were killed, and of the German policeman who was killed in the disastrous rescue attempt and of Georgian luger Nodar Kumaritashvili, who died in a training crash at the 2010 Vancouver Winter Games.

"I am not satisfied, but this is a big step forward," Ankie said. "There were Arab athletes among those who were moved (by the ceremony.) I wanted to tell Andre 'It took 44 years, but you have arrived. Your fellow athletes are paying their silent respects to you.'"

One more heartfelt desire remains, however. That is a moment of silence at the opening ceremony of the Tokyo 2020 Olympics.

"Think of those 11 people. It would be a vow never to repeat such a crime," she said.

"If there is a minute of silence, my fight will then be over."