If things keep going the way they are, Kodai Senga will make opposing batters hope the SoftBank Hawks become flexible enough to let him move to the major leagues.

The 26-year-old Senga, who has consistently been rated highly by major league scouts and is eager to move to the majors, told Kyodo News in a Saturday interview he has remade himself this season after spending some of his offseason with Chicago Cubs right-hander Yu Darvish.

"I was very conscious about really improving this year," he said at MetLife Dome outside of Tokyo. "I changed how I train. The big thing was Darvish inviting me to train with him. I went to his home in Dallas. There we spent time together and trained together."

"As a baseball player, that time was an amazing eye-opener, raising my consciousness of what was possible. I came home so motivated, because he's the kind of ballplayer I want to be, and now I'm much stronger."

This time a year ago, several major league scouts rated Senga at least as highly as Yomiuri Giants ace Tomoyuki Sugano, who has won the last two Sawamura Awards as Japan's most impressive starting pitcher.

Ironically, both pitchers play for clubs that have so far refused to allow players to move to the major leagues via the posting system. The Nippon Ham Fighters allowed Darvish to go at the age of 25 and Shohei Ohtani to leave as a 23-year-old. But unless their clubs' policies change drastically in the near future, neither Senga nor Sugano is likely to be pitching in the majors until their early 30s. 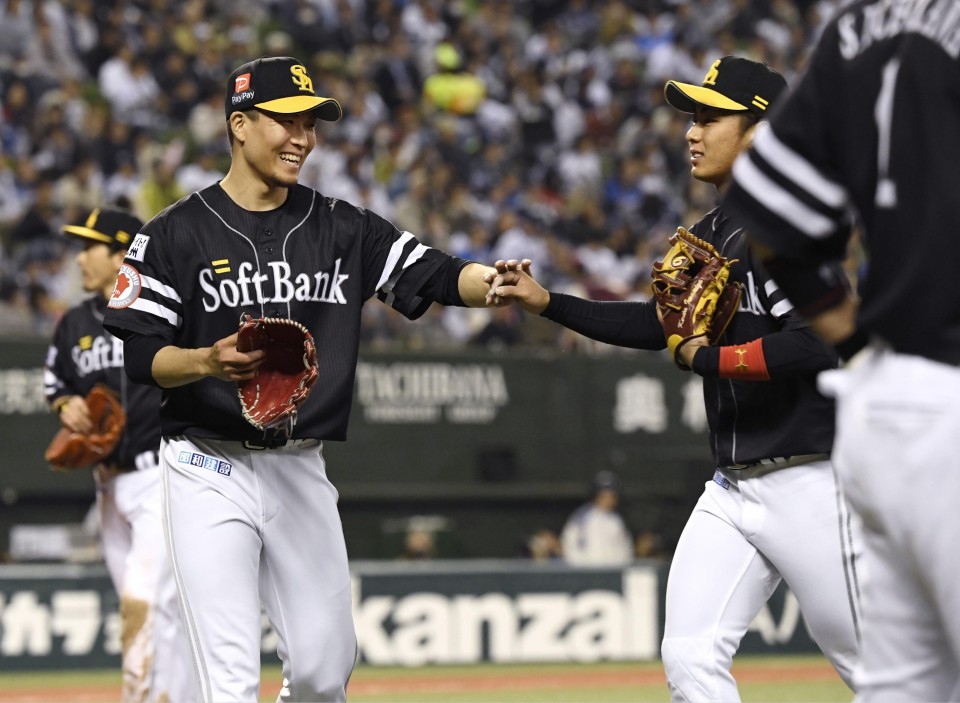 "There's not a lot I can do about that," said Senga, who for the first time last winter asked the Hawks to post him. "(Ohtani's case) was amazing. It all depends on what club you play for."

With a good fastball to set up his dynamite split-fingered fastball, big league scouts see Senga as a major league closer,

"I'm happy when I hear that," Senga said. "One wants to be a player whose name gets mentioned like that. But that's still a long way off."

What appears obvious now is how well he's pitching. Although he has only one win to his name this year, Senga has allowed five runs over his first 30 innings with 43 strikeouts. The win came on Friday, when he threw eight scoreless innings at MetLife Dome, where the Seibu Lions pummeled him in three ugly losses last season.

"It wasn't just this stadium," Senga said. "My whole year from start to finish was not that good, so until last year I didn't have any hang-ups about this place."

Although he matched a career high with 13 wins in 2018, Senga also lost a career-high seven games and posted a 3.51 ERA, his worst since becoming a starter in 2016.

"The numbers I put up last year were, for me, rather lame. It was incredibly frustrating. Because of that, I wanted to completely change this season, and that's what I spent my offseason doing," he said. "Going into the offseason with that desire was a factor.

"(From a physical standpoint) I feel a great deal better. There has been real improvement in velocity, in the quality of my pitches, and I've been able to take advantage of that a little."

Senga said he is more intent than ever on his in-season conditioning after battling minor injuries in 2018.

"Right now, I'm in good shape," he said. "One thing is pitching at a high level and another is taking care of my body and staying in good condition. In that area, I am more conscious of my training."

If Senga is able to pitch a full season with anything resembling the quality he's shown so far, perhaps opposing Pacific League clubs will start petitioning the Hawks to let him achieve his dream and pitch in the majors sooner rather than later.