Emperor Akihito and Empress Michiko visited Ise Jingu, a Shinto shrine in western Japan, on Thursday to report the upcoming abdication of the 85-year-old emperor on April 30 to the ancestral deities of the imperial family enshrined there.

The couple is on a three-day trip to Mie Prefecture since Wednesday. It will be their last trip to a local region during the emperor's reign.

The emperor, clad in a morning dress, and the empress, wearing a long dress, offered prayers at the shrine during the "Shinetsu no Gi" ritual, one of a series of rituals held for the imperial succession.

For the occasion, the emperor has brought with him the imperial sword and jewel, two of the family's three sacred treasures that play a key role in the succession. The last treasure, a mirror, is kept at the shrine. 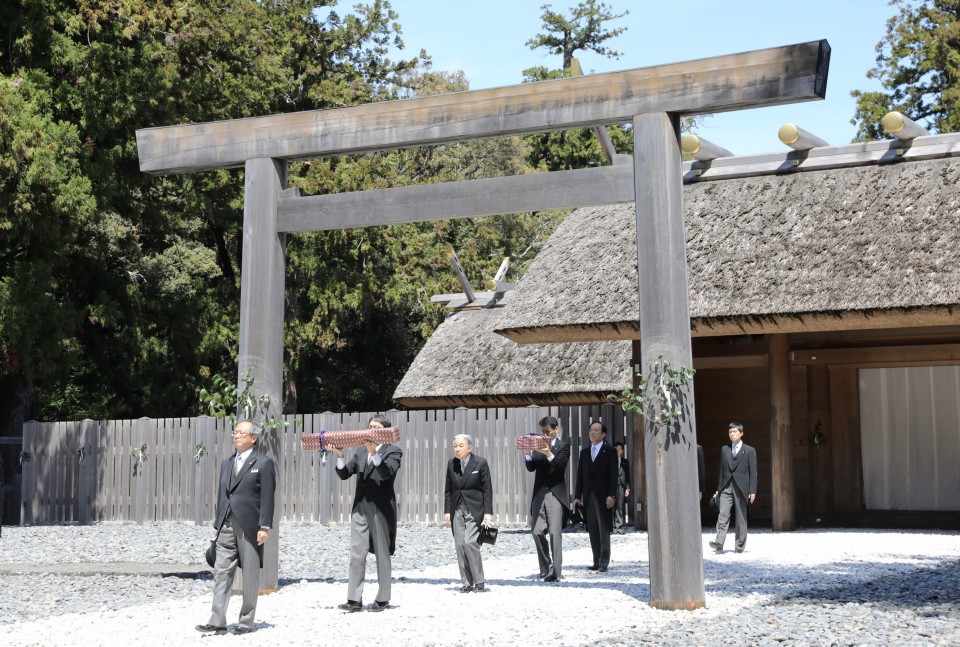 The regalia, called "Sanshu no Jingi," will be passed on to 59-year-old Crown Prince Naruhito after he ascends to the Chrysanthemum Throne on May 1.

The emperor and the empress last visited the shrine in March 2014, and this is their fifth visit since the emperor was enthroned in January 1989 upon the death of Emperor Hirohito, posthumously known as Emperor Showa.

The couple is scheduled to visit Musashino imperial mausoleum on the outskirts of Tokyo, where the late emperor is buried, on Tuesday and take part in various official events until the end of the month. Emperor Akihito will deliver his last speech as emperor on April 30.

In 2016, the emperor indicated his wish to step down in a rare video message, citing his concern that he might not be able to fulfill his official duties due to his advanced age.

In the following year, the parliament enacted one-off legislation to enable him to abdicate as the first Japanese monarch to do so in about 200 years.