Nissan Motor Co. shareholders approved the removal of Carlos Ghosn from its board on Monday, putting an end to nearly two decades of his leadership that saved the company from the brink of collapse to create one of the biggest global automakers.

The decision at an extraordinary shareholders' meeting means Ghosn lost his last remaining post at Nissan after being discharged as chairman. It was decided as shareholders grilled the company's management for overlooking his alleged financial misconduct over the years.

Nissan's alliance partners Renault SA and Mitsubishi Motors Corp. have said Ghosn will step down as a director in June.

At the first such meeting since Ghosn and his close aide Greg Kelly were arrested last November on suspicion of financial misconduct, shareholders also approved Nissan's proposal to remove Kelly as director and appoint Renault Chairman Jean-Dominique Senard as a board member. 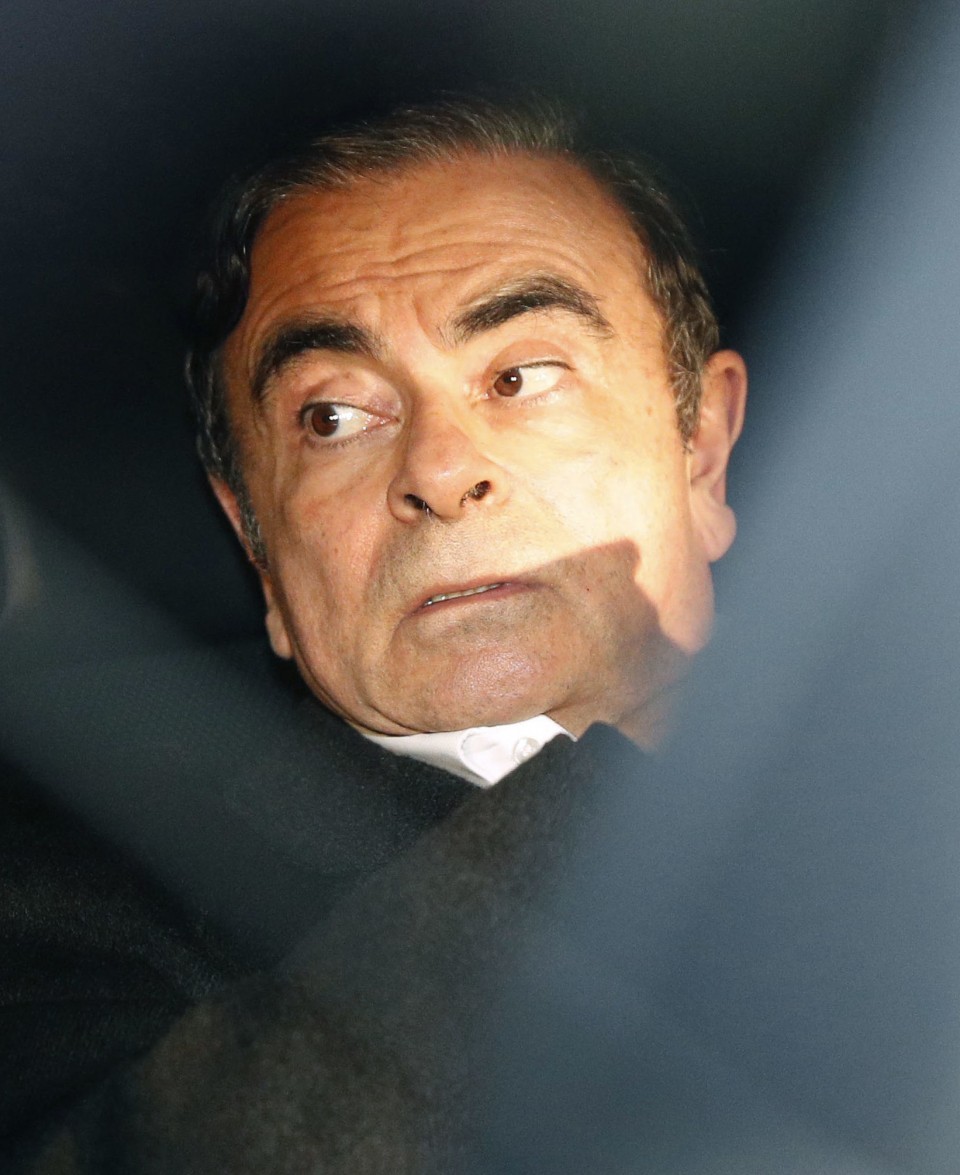 Ghosn's removal will mark a dramatic break for Nissan from the growth strategy pursued under his leadership and pose challenges for its future success in an industry experiencing a rapidly changing competitive environment, as it needs to rebuild flagging sales in the key U.S. and Chinese markets and address growing demand for new mobile services.

Nissan executives faced fierce criticism for the turmoil during the meeting with 4,119 shareholders at a Tokyo hotel, with the company's share price having dropped about 7 percent since the arrests.

Some shareholders called for a thorough explanation of how the alleged misconduct occurred and asked for a future growth plan, while others called for CEO Hiroto Saikawa and all other management members to leave.

"I think all members of the current management should quit and the whole team should be reformed completely given its moral responsibility," one shareholder said, drawing a round of applause from the attendants.

Saikawa said he will stay in his post as he believes his responsibility is to bolster operations and governance as well as the alliance with Renault and Mitsubishi Motors.

"I have the responsibility to stabilize the alliance and minimize the effect on our operations and distress among the employees," he said at the meeting, as he offered an apology over Ghosn's arrest and the indictment against Nissan over financial misconduct.

"I will think about my future when I reach the point where I can hand over the baton to the next (leader)," Saikawa said.

Given the murky outlook for Nissan's business, one shareholder asked whether he can continue to receive dividends from Nissan, while another asked whether the company plans to provide Ghosn with any retirement pay, as Renault already decided to do so in February.

Saikawa said he "does not want" to pay Ghosn any remuneration.

Other shareholders questioned the fate of the alliance which became the world's second-largest auto group by volume last year, after Volkswagen AG.

The French government, the largest shareholder in Renault, has sought to merge Renault with Nissan, while some Nissan executives view the partnership as unfair, according to sources familiar with the matter. Renault holds a 43.4 percent stake in Nissan, which has a 15 percent stake in the French peer without voting rights.

Saikawa ruled out an immediate review of the partnership, saying Nissan needs to "respect Renault's position as the biggest shareholder (in Nissan) but when it comes to managing the alliance, Nissan and Renault have been equal and have forged a win-win partnership."

Senard, named as Renault chairman in January, has also been tapped as chairman of the newly launched board that oversees the alliance, with Saikawa, Renault CEO Thierry Bollore and Mitsubishi Motors CEO Osamu Masuko working with him as board members.

"From now on, with the help of my colleague directors, I will dedicate my energy to enhance the future of Nissan," Senard said at the meeting after his appointment to the Nissan board was approved.

Nissan's new management team will start working on measures to enhance its corporate governance as an urgent task. A third-party committee has made proposals including tapping outside directors as board members and creating committees to oversee executive remuneration and appointments. 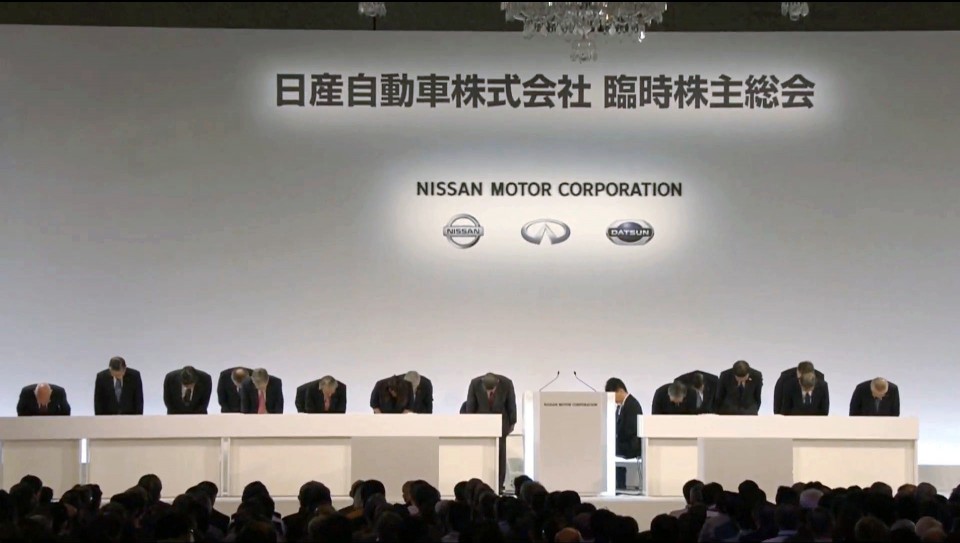 The committee said earlier in a report that "the primary root cause" of the alleged misconduct "was the concentration of all authority in Mr. Ghosn, including that regarding human affairs and compensation issues."

Ghosn lost his chairmanship posts at Nissan, Renault and Mitsubishi Motors after his arrest and also resigned as CEO of Renault.

He has been charged with violating the financial instruments law by underreporting his remuneration. He also faces a charge of aggravated breach of trust in relation to the alleged transfer of private investment losses to the automaker's books. He has denied all allegations.

Kelly, formerly a Nissan representative director, was indicted for conspiring to understate Ghosn's remuneration in the automaker's securities reports over a number of years.

Ghosn was released on bail on March 6 after 108 days in detention but was rearrested Thursday on a fresh allegation that he misused Nissan funds and caused the automaker a $5 million loss.

Junichiro Hironaka, one of Ghosn's lawyers, will meet the press on Tuesday to release a video of a statement recorded by the former Nissan chairman while out on bail, according to the Foreign Correspondents' Club of Japan.

Nissan has said an internal investigation, triggered by a whistleblower's report, found Ghosn used company assets and funds for private purposes. The report came as Ghosn was apparently seeking a merger of Nissan and Renault, sources close to the matter said.

Sent to Nissan in 1999 as chief operating officer after the Japanese automaker forged a capital alliance with Renault, Ghosn was credited with saving the Japanese carmaker from near bankruptcy through savage cost-cutting.

He became Nissan president in 2000 and served as chief executive officer from 2001 to 2017, reconfiguring the Japanese-Franco partnership to generate greater synergy effects by sharing procurement costs and technology, among other steps.