Detainees offer a glimpse of life in Manila's most congested jail

"Our place here, including where we sleep, is really cramped."

With those words, Edgar, 39, summed up his daily life inside Navotas City Jail, an understatement of the Philippine capital's most congested detention facility for suspected criminals awaiting completion of their court trial.

"If some would like to take some rest, we have to take turns due to lack of space, and that's irritating," the detainee, who is facing illegal drugs charges, said.

When Kyodo News in mid-February visited the jail, located northwest of metropolitan Manila, the facility's congestion rate stood at 2,362.50 percent.

The 579 square meter jail, built ideally for 40 detainees, was accommodating 945 at the time, said Ricky Heart Pegalan, its warden. "Since I assumed office (here) in December 2017, Navotas City Jail is already the most congested," he said. 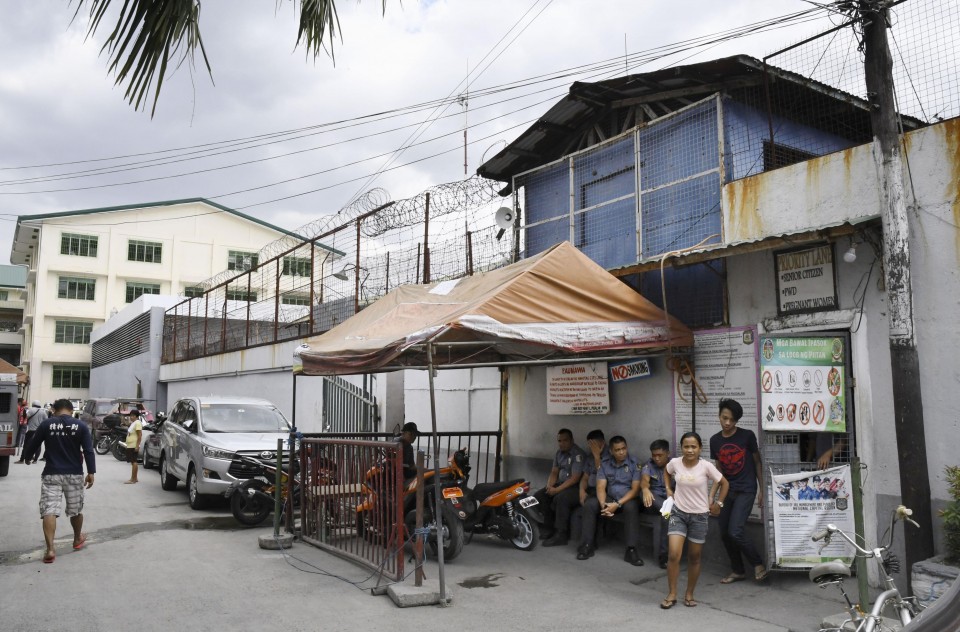 According to the Bureau of Jail Management and Penology, which oversees all 476 jails across the country, the average national congestion rate, as of mid-March, was 453.94 percent. There were 137,173 detainees nationwide at the time.

Almost all detainees in BJMP facilities are those whose cases are still being heard in court. The remaining few are those serving sentences of three years or less.

Convicted criminals given longer sentences do time in other facilities run by the Bureau of Corrections.

In 2018, the average national congestion rate of BJMP stood at 561 percent, slightly lower than the 2017 average annual rate of 586 percent.

"There are many factors aggravating the congested jail conditions in the country. Among them are the slow justice system that cannot speedily resolve cases of inmates," the human rights advocate group Karapatan said.

Karapatan deputy secretary general Roneo Clamor said in statement sent to Kyodo that a lack of judges, frequent postponement of court hearings, inability of many detainees to post bail, corruption and non-prioritization hinder the speedy disposition of cases.

"The government is not taking the development of detention centers seriously, as mandated by many international standards, since rehabilitation is not a priority," Clamor said.

The situation worsened when President Rodrigo Duterte, who was elected in mid-2016, made good on his campaign promise of going after illegal drugs suspects. As of Feb. 28 this year, the government's war on drugs has resulted in 176,021 arrests and the surrender of many more others, based on government tallies beginning July 1, 2016.

Pegalan, the jail warden, said that prior to the current administration, the average jail population of Navotas City Jail was only between 300 and 400. "But when President Duterte assumed office, the jail population significantly increased," he said.

The warden notes that 70 percent of detainees there are facing illegal drugs charges. Edgar, who has been detained since March last year, is one of them.

"I think the accusations against some (of us here) are unfair because, according to some our fellow detainees, while they admit to involvement in illegal drugs, the charges, however, are not accurate. The cases being filed are too grave," Edgar lamented.

Pegalan, also a lawyer, explained that some suspects complain of being charged by police for selling illegal drugs, which carries a heavier penalty, when they claim to be guilty only of possession.

Plea-bargaining of cases in courts, where suspects admit guilt to lesser offenses, has proven to be one effective tool in easing jail congestion as it results in the prompt release of detainees, Pegalan said.

"Last December, when I signed release orders for our detainees here and checked the accompanying court decisions, I found that it was mostly because of plea-bargaining," he said.

Other measures being undertaken are intensified paralegal services to speed up either the release of acquitted suspects or transfer of convicted detainees to prisons, early release for good conduct and the building of new detention facilities.

Pegalan said that thanks to the city government of Navotas, an extension jail facility was completed in March. While its ideal capacity is only for 76 detainees, up to 500 from the existing facility will be transferred there in late April.

The BJMP said the drop in the annual average jail congestion rate from 2017 to 2018 was attributed to the completion of seven new facilities in the middle of last year.

Pegalan said high congestion in jails prevents the BJMP from fully discharging its function and achieving its mission related to the safekeeping and development of detainees.

Lauro, 51, another detainee at Navotas City Jail since October 2016, believes a congested jail is not conducive for reforming behavior, and indeed often has the opposite effect. "You cannot behave well. You cannot concentrate on what you want to do. People get hotheaded," he said.

It takes a toll as well on their physical hygiene because the water supply sometimes is not sufficient for everybody.

"Others don't get to take a shower during the day, so there's a bad odor," Edgar said. "When I was new here, my skin got itchy. We suffer from those kinds of skin diseases due to overcrowding."

Despite the challenges, Pegalan said they continue to administer rehabilitation activities for the detainees, including religious services, alternative learning programs, and other moral recovery undertakings.

"While additional budget for more detention facilities is being considered, we reiterate that resolving the root causes of why people resort to criminal activities should be primarily addressed," Karapatan's Clamor said.