Japan's mission to the United Nations hosted a job information and networking session recently to help boost the number of Japanese nationals employed within the U.N. system, a massive globe-spanning workforce in which the country remains statistically underrepresented.

About 50 Japanese expatriates ranging from university students to mid-career professionals gathered at the Japanese mission near the international body's New York headquarters for the session. It included presentations by Japanese nationals who work in the system, an informational speech to demystify the application process, a question and answer period and mock interviewing.

"We are open to everybody -- we do not discriminate and we would love to have everybody on board who believes in the mandate of the United Nations," said Eva Maria Jansen, the U.N. human resources officer who delivered the talk on ways for prospective employees to get a foot in the door.

Among the strategies she recommended were finding internships or contracts with U.N. agencies, applying for full-time openings at U.N. headquarters or even seeking a post back home in Tokyo's United Nations Information Center.

She also explained hiring paths like the Young Professionals Program, which is mostly geared toward professionals in around their early 30s with undergraduate degrees. Participants, who can be from any of 60 participating countries including Japan that are underrepresented in the U.N.'s worldwide staff, must speak English or French fluently and pass an exam. 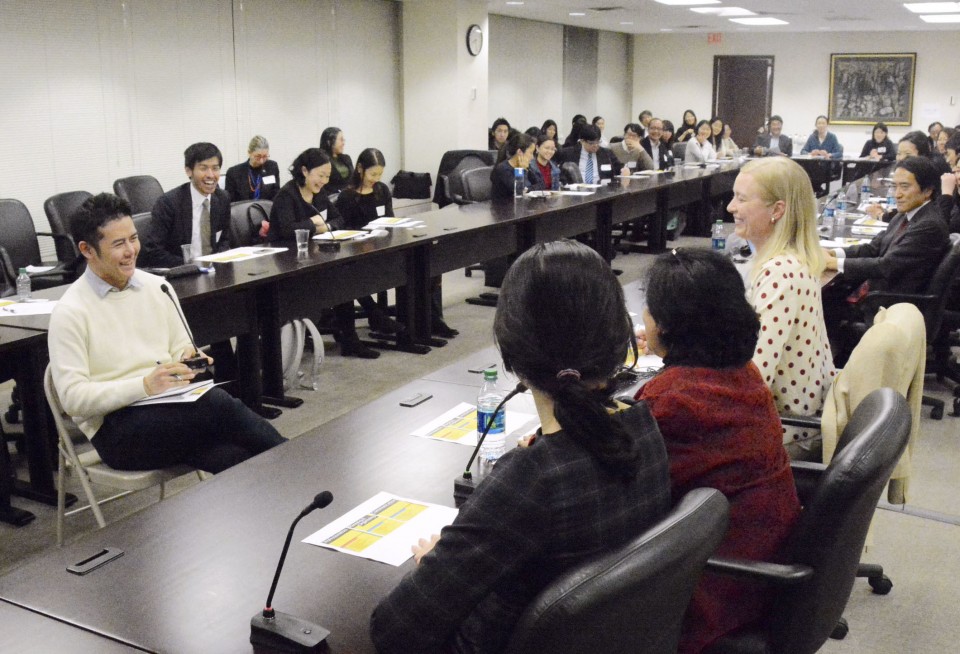 (Taro Tanaka (Far left) is pictured during a mock interview)

"A lot of non-English mother-tongue speakers think that fluency in the U.N. is such a high level that they can never reach, but it is really important to point out what you know," Jansen suggested.

During the mock interviewing portion of the event, Taro Tanaka, a 32-year-old lawyer and graduate student in New York, was asked by a panel of three interviewers to describe a time he went beyond the call of duty.

As a gay man, Tanaka recalled being asked by his former boss to allow a major Japanese newspaper to profile him in coverage related to homosexuality -- a request he accepted although he had not yet come out to his family.

Misa Kishi, a 55-year-old medical doctor and public health specialist, described her communication skills during the mock interview by drawing on her experiences in Africa and the challenges of working with an interpreter in Malawi to convey crucial information.

In addition to receiving immediate feedback, both participants were given tips to improve their chances of getting a future interview.

The event held in late February was part of Tokyo's ongoing bid to elevate its presence in the U.N. system, with the ultimate goal being proportional representation based on factors including its contribution to the international body's budget.

As the third-largest donor behind the United States and China, Japan could expect 203 of its nationals to fill positions at U.N. headquarters in New York. The most recent data, however, show that only 75 such jobs were staffed by Japanese as of the end of 2017.

Similarly, the current total of roughly 850 Japanese working in the U.N. system worldwide falls short of the desired threshold of 1,000, which Tokyo hopes to reach by 2025.

There are nearly 40,000 U.N. staffers overall, with a push under way to increase the hiring of women -- who account for about 35 percent of the U.N.'s employees at present -- as well as workers with disabilities and those from gay and transgender communities.

Koji Shimoto, a McGill University student who flew in from Montreal to attend the Japanese mission's event, said he appreciated the mock interviewing and the "comprehensive nature of detailing different paths or programs available to us."

"I think I imagined the U.N. as being closed or inaccessible...but understanding that they offer a lot of programs for recent graduates and a variety of programs for people on different paths, that was encouraging," explained the 21-year-old who studies political science and economics.

For Tanaka, the opportunity to hear from several Japanese who work within the U.N. system was particularly meaningful.

"I could see how Japanese people who are usually not that good at English are actually working and contributing to the U.N., so that was very useful for me," he noted.

Since participating in the session, the young lawyer said he has been accepted for an internship with UNAIDS in Geneva, where he will put his academic and professional background in human rights to use.

"The paramount consideration at the U.N. for recruitment is identifying candidates who meet the highest standards of competence, integrity and efficacy, while paying due consideration to the need for recruiting staff on as wide a geographical basis as possible," said Christine Asokumar, head of diversity and outreach in the New York headquarters' staffing section.