Long-standing Tokyo theater Meijiza has never been afraid of change and with its new digital stage curtain, a collaboration with art collective teamLab, the theater continues to deliver on a tradition of innovation.

The new stage curtain -- “donchou” in Japanese -- was unveiled to audiences by Meijiza Co., Ltd, at their theater in Tokyo’s Chuo Ward, earlier in April.  Entitled “Four Seasons Kishoza - A stage Curtain Spun from Time,” the 7-meter-tall, 20-meter-long creation depicts the townscape of Nihombashi during the early Meiji era when the theater’s predecessor, Kishoza, began entertaining audiences.  Looking closely enough reveals people in the scene, some of whom are wearing traditional Japanese clothes and others wearing those that reflect the increasing influence at that time of cultures from around the world.

The curtain is an ever-changing and evolving work of art, quite literally, thanks to the digitally creative hand of teamLab which presents pre-show audiences with a scene constantly adapting to reflect the time of day, the season, even the day’s weather. 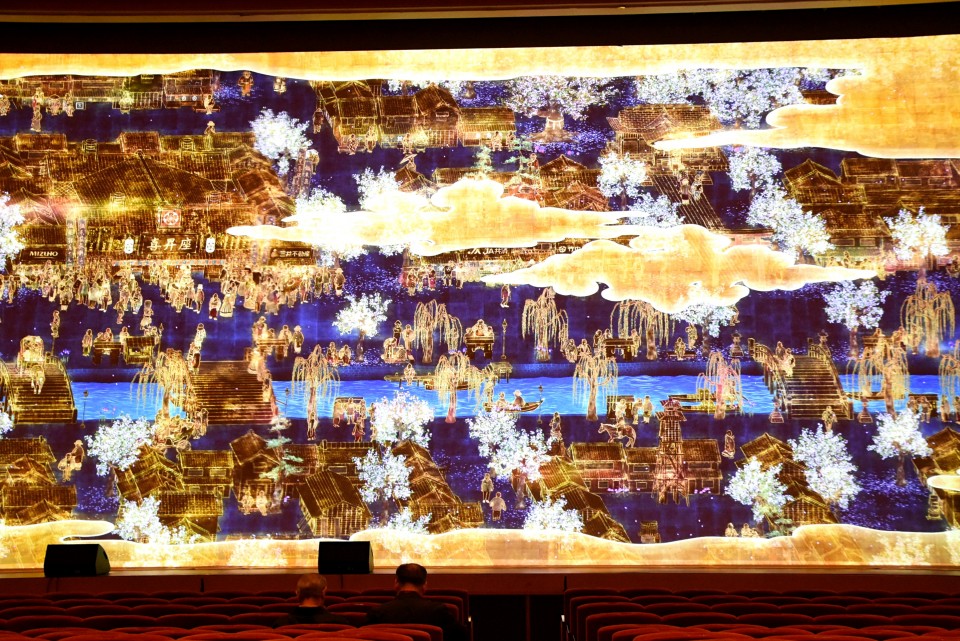 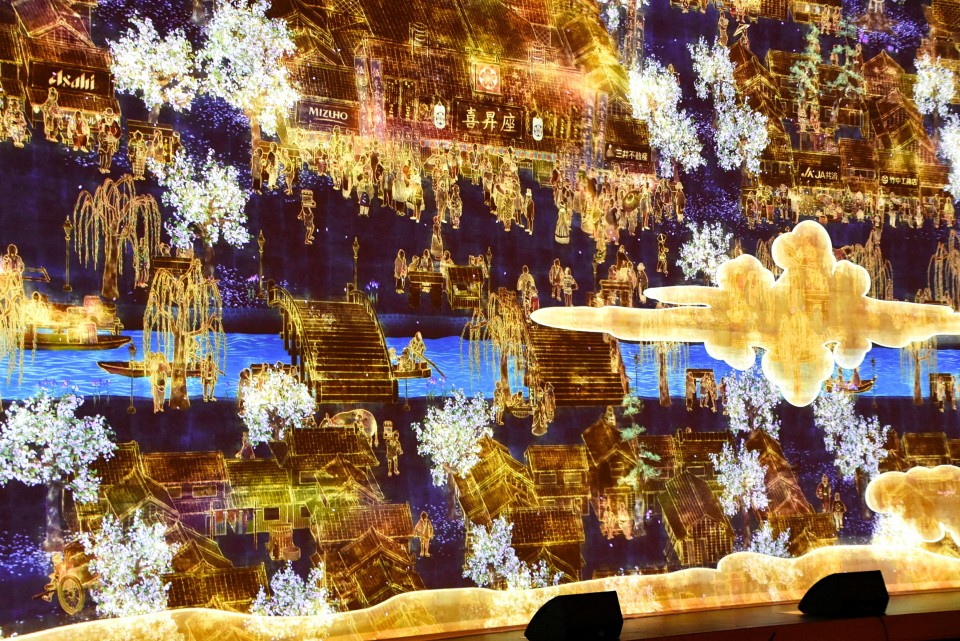 During our visit, in mid-April, town folk on the curtain could be seen going about their business, passing under the branches of cherry trees, the blossoms on which were slowly revealing spots of green, such is the detail of the work.

“It’s a creation that keeps on changing, every day, so we haven’t been able to grasp ourselves the full extent of what it contains,” explained Hiroya Kimikawa, from the theater company’s advertising division.

“Whatever the season, whatever time you see it, you’re moved every time.  It’s that kind of work.”

The new curtain comes on the back of Meijiza celebrating its 145th anniversary in 2018.  A chance then for the theater company to create a new legacy.

“When it comes to the curtain, yes, it’s a stage device, but more than that it’s a symbol of the theater,” said Kimikawa.

“It’s the first thing that audiences see after taking their seats, so in that way it’s like the face of theater. We thought about how to renew it in a way that would reflect the milestone of the 145th anniversary.”

With the original curtain having been embroidered by hand the team at Meijiza had initially thought about doing something with that.  However, in wanting to send out a message of something new and innovative, thoughts were directed toward the use of modern technology.

According Kimikawa, the team at Meijiza toyed with the idea of making a movie to mark the milestone but theirs is 145 years of experience of putting on plays and theatrical performances, not shooting film.  The resulting consultations with companies in that field, though, lead to the collaboration with teamLab.

“It was teamLab who suggested that, rather than just making a video, it might be better to do something that reflects Japan’s unique stage curtains and use digital technology to expand on that,” said Kimikawa.

“We felt that this was a good match with our own message of tradition and innovation.”

“Four Seasons Kishoza” can be enjoyed by show audiences from one hour prior to show start.  So far, reaction to the curtain has been positive despite the gap in years between the digital-art creative and the long-established traditional theater, as well as some of its audience members, many of whom feel that the donchou has become a new attraction of Meijiza.

The positive reaction is, in part, down to the approach of the people at teamLab who, Kimikawa explained, “took great care to respect the tradition of Meijiza at the same time as evolve it.”

Not that Meijiza has ever shied away from trying to incorporate something new, something to challenge its audiences.  The theater itself, over its 145-year history, has undergone multiple name changes and was able to rise from the flames during Japan’s turbulent Taisho and Showa eras.  It’s an institution that would appear to know about the importance of keeping up with the times.

“Meijiza has maintained a tradition of always trying to introduce something new, including into the stage productions.  If audiences keep coming into the 150th year, the 200th year, we shouldn't break from this tradition,” said Kimikawa.

While the new donchou looks set to surprise said audiences for the foreseeable future (with theater goers yet to witness the digital scene reflect summer, autumn and winter seasons), the people at Meijiza see it as just the beginning of the theater-going experience.  With shows that typically last for around four hours, special bento meals for intermissions, lounges and eateries, and an area devoted to souvenirs, behind the new curtain lies an experience that isn’t limited to the performance alone.