Emperor Akihito, who on Tuesday will become the first Japanese monarch to abdicate in about two centuries, has devoted the 30 years of his reign to defining his role as "symbol of the state," a new status without political power created under the postwar Japanese Constitution.

The 85-year-old emperor's visits to console those affected by natural disasters and survivors of World War II as well as his years of warm personal exchanges with marginalized people, such as patients of leprosy and other diseases marked a major shift from precedents set by his predecessors.

His personal interactions were seen as a symbolic move by the emperor to heal the scars of people who have suffered and bring closure to Japan's past, observers say.

"I have considered it the first and foremost duty of the emperor to pray for peace and the happiness of all the people," the emperor said in the speech in August 2016 when he publicly indicated his wish to step down for the first time.

"At the same time, I also believe that in some cases it is essential to stand by the people, listen to their voices, and be close to them in their thoughts," he added.

In July 1991, just over two years after the emperor ascended the Chrysanthemum Throne, the imperial couple startled the public when they kneeled down to speak to people affected by a massive volcanic eruption in Nagasaki Prefecture in southwestern Japan. 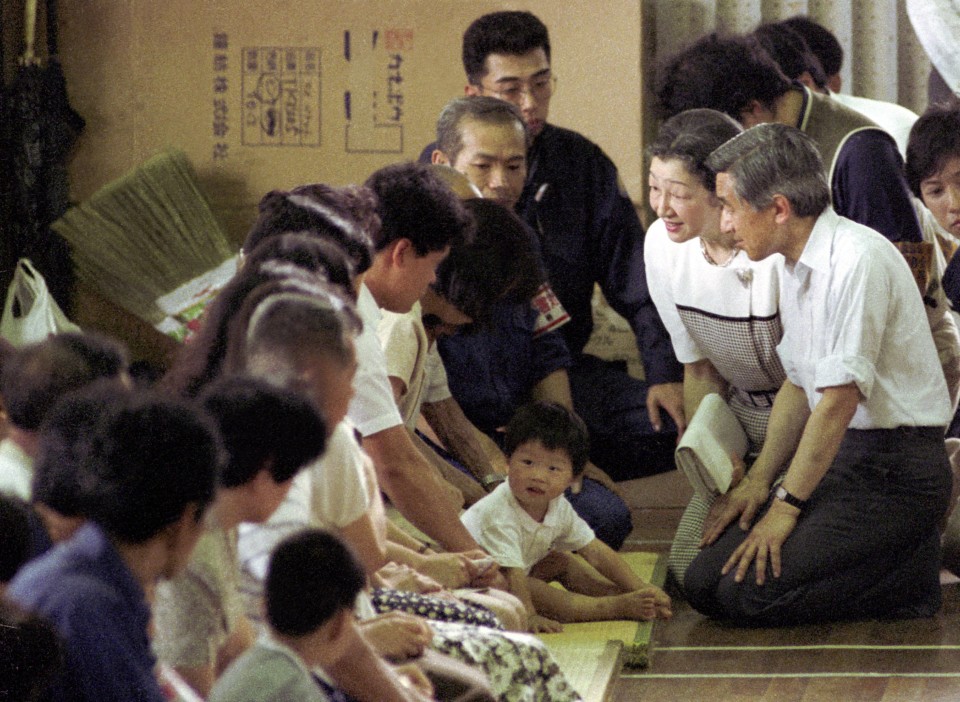 Emperors in Japan, once considered divine, have not always had such personal interactions in the past, and kneeling down to talk with members of the public was not the norm.

Both Nagasaki's then governor, the late Isamu Takada, and former Shimabara Mayor Kanichi Kanegae said they were "surprised" by the action.

Looking back, a close aide to the couple said the visit to Shimabara marked a moment when the emperor "began walking the path of being a symbol" of the state.

Since then, the emperor and the empress have made at least two rounds of visits to each of Japan's 47 prefectures, often meeting people hit by major natural disasters.

In January 1995, the couple went to Hyogo Prefecture to encourage people affected by the Great Hanshin Earthquake in western Japan.

In November 2004, they went to Niigata Prefecture shortly after a powerful earthquake rocked the region, and traveled to northeastern Japan areas devastated by a massive earthquake and tsunami in March 2011 that also triggered a nuclear crisis at the Fukushima Daiichi power plant.

Their visits continued even in the final year of the emperor's reign, as they sought to comfort people struck by torrential rains in Hiroshima, Okayama and Ehime prefectures in western Japan.

But perhaps more symbolic was the imperial couple's gesture of bowing at a seaside cliff in Saipan in 2005, 60 years after World War II ended.

During the war fought under the name of the emperor's father Emperor Hirohito, many Japanese soldiers and citizens jumped to their deaths from the cliff rather than surrender to American soldiers.

The emperor, who was 11 when Japan was defeated in the war, is said to have deepened his wish for peace after seeing the capital flattened by U.S. air raids.

In 1995, the couple made a tour of Hiroshima and Nagasaki, which were devastated by U.S. atomic bombs in 1945, as well as Okinawa, one of the bloodiest battlefields of the war.

Their journeys to heal the wounds of war extended overseas. In addition to the visit to Saipan in 2005, they made a trip to Palau in 2015 on the 70th anniversary of the end of the war and another visit to the Philippines the following year to pray for all war dead, regardless of nationality.

During his 30 years on the throne, the emperor along with the empress visited a total of 36 countries, and became the first Japanese emperor to travel to China.

Emperor not alone in abdicating, as examples in other countries show

Emperor performs last duty outside palace ahead of abdication

"In the long history (of the relationship) between the two countries, there was an unhappy period in which my country inflicted great suffering on the people of China. About this I feel deep sadness," the emperor said at a banquet held in Beijing in October 1992.

The imperial couple's exchanges with people with chronic diseases who had suffered years of discrimination also marked a sharp departure from the past.

On Oct. 4, 2004, a high-speed boat carrying the emperor and the empress stopped off by a small island in the Seto Inland Sea to allow the couple to take a moment to wave at residents of the state-run Seishoen leprosy sanatorium on Oshima Island. Their vessel was unable to dock because it was too large.

The central government adopted an "isolation policy" for leprosy patients from 1907 and forced them to live in isolated facilities across the country, a policy which continued until 1996, when the government abolished the anti-leprosy law.

At its peak in the 1950s, the government segregated more than 11,000 patients into national sanatoriums.

Since their days as crown prince and princess, the couple spent about half a century through 2014 visiting residents of 14 leprosy sanatoriums across Japan. The Oshima Seishoen was the only facility they could not enter.

Emperor Akihito said at a press conference on the occasion of the 10th year of his reign that he considers sympathizing with the disabled and the elderly to be an important role for himself and the empress.

Empress Michiko also said she thinks that while offering assistance is the role of government, the couple is expected to provide "psychological support."

"His majesty the emperor has persistently explored how an emperor as a symbol of the state should be," said Shingo Haketa, 77, former chief of the Imperial Household Agency.

Visits the couple made to over 500 welfare facilities for children, the elderly and others reflect the emperor's opinion that he "should not just think about the people in an abstract manner but relate to each person who is in a vulnerable position," he said.

The couple also met with Minamata disease sufferers at a welfare facility in Kumamoto Prefecture, southwestern Japan, in October 2013.

"I felt that they were trying to face the pain of patients, who have been tossed about by the state, as individual human beings," said Takeko Kato, the head of a welfare facility who met with them. 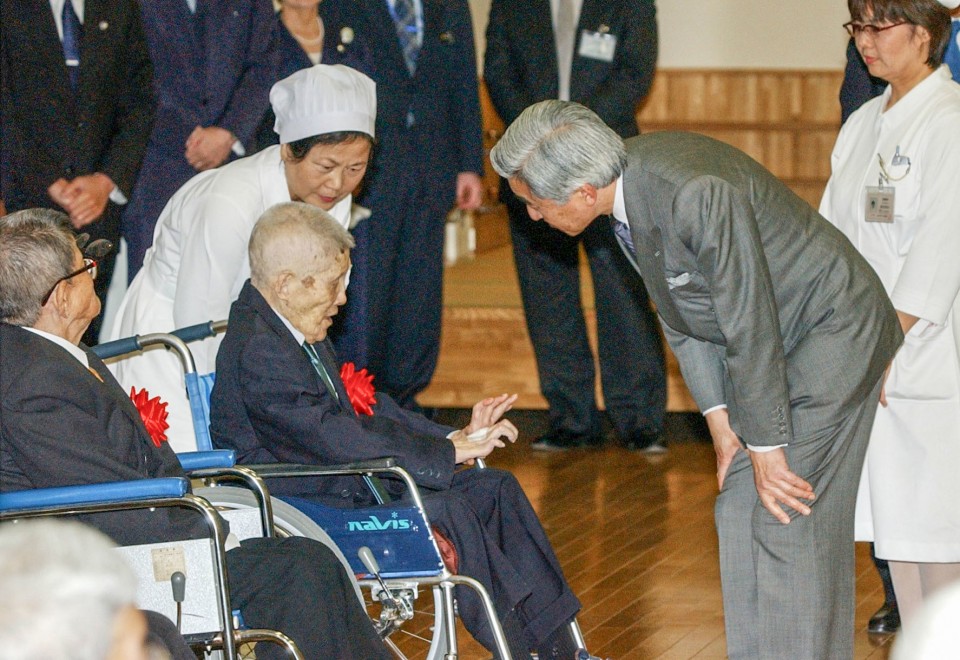 The disease, characterized by paralysis in the hands and feet and visual-field defects, has been traced to mercury-tainted water dumped into Minamata Bay by a fertilizer maker in the 1950s and 1960s. Birth defects were caused after the mothers consumed tainted food.

Reflecting on his journey as emperor, Emperor Akihito said in a press conference marking his 85th birthday last December, "I would like to thank from the bottom of my heart the many people who accepted and continued to support me as the symbol of the state."

"I am also truly grateful to the empress, who herself was once one of the people, but who chose to walk this path with me, and over sixty long years continued to serve with great devotion both the imperial family and the people of Japan," he said.