Japan is gearing up to accept more foreign workers under its new visa system launched earlier in the month, with a qualification exam for applicants held in the country for the first time on Sunday.

The exam, which took place in locations across Japan, focused on checking knowledge and skills required to work in the country's accommodation industry. The first exam for candidates hoping to work in the nursing care business was held in Manila on Saturday.

Japan created a new visa system on April 1 to bring in more foreign workers to the country struggling with an acute labor shortage, marking a major policy shift from its traditionally strict immigration rules.

Over the next five years, the government expects up to 345,150 foreigners to acquire a newly created resident status called Specified Skilled Worker No. 1 to work in 14 labor-hungry sectors such as accommodation, nursing care, construction and farming. The visa will enable them to stay up to five years.

About 390 people took Sunday's exam held at the seven test sites including in Tokyo, Nagoya and Osaka. The results will be announced May 25. 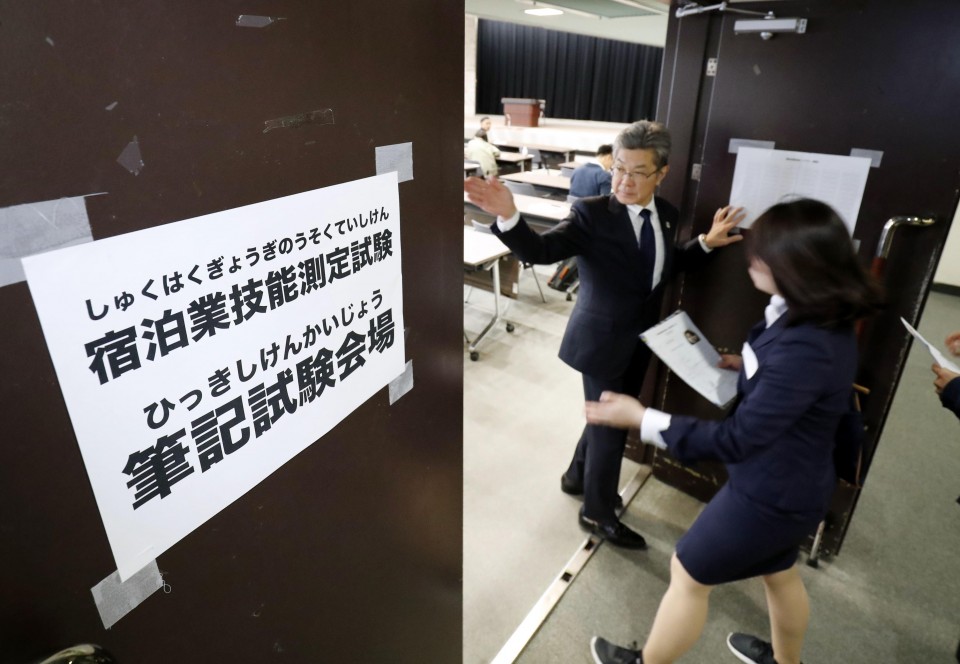 The exam involved a paper test concerning knowledge on the service industry, and a customer service skill test.

Many of the applicants are believed to be students who have the experience of working at hotels as part-time workers in Japan.

Elma Sulistia Ningrum, a 24-year-old Indonesian living in Saitama Prefecture, said she can speak Japanese and English but the knowledge test was difficult because she was not familiar with the hotel business.

The job seekers will also have to clear a Japanese language proficiency test before applying for the new visa. As for the accommodation industry, successful candidates will likely be granted the visa in the summer at the earliest, according to the Japan Tourism Agency.

The Japanese government hopes the influx of foreigner workers will ease the manpower shortage at hotels, especially those in rural areas, which could lead to a further increase in tourists.

An exam for the food service industry is scheduled in Tokyo and Osaka later in the month.

Japan had limited the issuance of working visas to people with professional knowledge and high skills, such as doctors, lawyers and teachers. But it decided to loosen the restrictions on the entry of foreign workers from April to tackle serious labor shortages amid Japan's aging population and falling birthrate.