After being expelled from university for "inciting a riot," fighting for African-Americans' civil rights and protesting the Vietnam War, Warren Furutani decided it was time to galvanize a Japanese-American community which had experienced mass incarceration two decades earlier.

Just 22 years old at the time of the first pilgrimage to the Manzanar internment camp site in 1969, Furutani, now 71, said recently from his home in Gardena, California, "As Japanese Americans and Asian Americans, we were looking for an issue that would bring people together around civil rights or human rights." 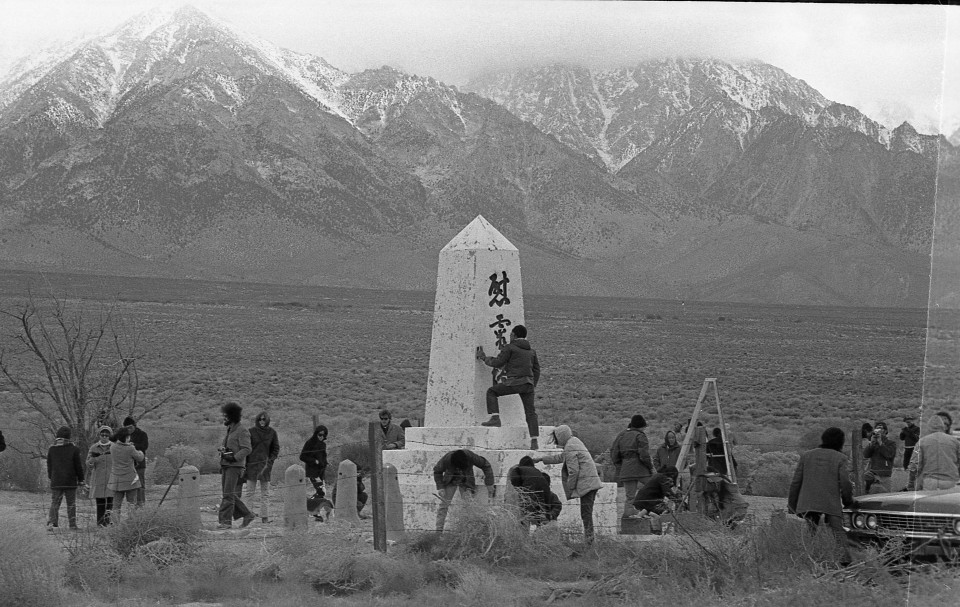 (Photo taken in December 1969 shows the first group of Japanese Americans to visit California's Manzanar, one of 10 "relocation centers" where people of Japanese ancestry were incarcerated after the attack on Pearl Harbor in 1941, on a "pilgrimage" as they clean the obelisk symbolizing the internment camp's cemetery.)[Photo courtesy of Robert A. Nakamura]

Furutani's parents, both born in California, were among approximately 120,000 people of Japanese descent who were relocated from their homes and incarcerated in camps across the U.S. West and Midwest as "protection against espionage and against sabotage to national-defense material" after Japan bombed Pearl Harbor on Dec. 7, 1941. They met at the Rohwer War Relocation Center in Arkansas, one of 10 similar facilities in the country.

"We knew there was a thing called a 'camp.' We knew it was important because people would always talk about it, but sort of in whispers," said Furutani.

"But as sansei (third-generation Japanese Americans), yonsei (fourth generation), we didn't know anything about it because our parents didn't talk about it."

As exclusion based on race in America became a pivotal national issue in the 1950s and 1960s, Furutani and fellow Los Angeles-area activist Victor Shibata decided to drive to investigate Manzanar, the nearest World War II-era internment camp that operated between 1942 and 1945, three hours north of Los Angeles near Death Valley National Park.

At the time, Japanese Americans' internment was "like a forgotten chapter of American history" not depicted in Hollywood movies, documentary films or history textbooks, said Furutani.

What the two young men found at Manzanar was an "archeological treasure." With limited knowledge of Japanese kanji characters, Shibata realized they had stumbled upon Manzanar's cemetery. Nearby, they found a pile of trash, old cans and U.S. Army-issued ceramic dinner plates.

"It was like it was buried in a shallow grave and the wind blew the top surface off to reveal what was underneath," said Furutani.

"That was like the (internment) experience -- it was something that had been buried by our community, that people didn't talk about very much, but over time the wind blew the top surface, and now it was starting to reveal itself. Sansei, yonsei, we were the ones to sort of rediscover this."

After their visit, Furutani and Shibata pledged to return with other community members to educate themselves on the internment experience. In December 1969, 150 Japanese Americans made the first pilgrimage to Manzanar.

"(Shibata) came up with the word 'pilgrimage' -- coming back to a very important, sacred place," said Furutani.

"And that's what it's turned out to be: a pilgrimage."

After Sue Embrey, a second-generation Japanese American who worked on Manzanar's newspaper, shared her "camp" experience, other internees opened up to the younger generations.

"It became very healthy for them to talk about this traumatic experience, and stories started to come out and people started to write books," said Furutani, who acknowledged that he and his friends experienced backlash from people who resented their efforts to reopen old wounds.

"That's when we started to redefine the Japanese-American community," he said.

"Over these 50 years of the pilgrimage, we've gone through redress reparations, we've gotten an apology from the president of the United States," said Furutani, who has taken part in every Manzanar pilgrimage since 1969.

"There's been a lot of healing, a lot of history, but what political activists like myself have learned early on is we didn't want this to just be nostalgia, or a history lesson -- a critically important history lesson. It had to be relevant to today."

In 2017, months after President Donald Trump issued an ill-fated executive order -- widely referred to as the "travel ban" -- that temporarily barred people from seven Muslim-majority nations from visiting the United States, 150 Muslim-Americans joined the pilgrimage to Manzanar.

After Trump signed the order, organizations such as the Japanese-American Citizens League pledged support to Muslim-Americans, stating that an exclusionary presidential act similar to the mass incarceration of Japanese Americans should not be repeated.

"There's this continuity of political policy in America where if you run into a group of people that are in the way, or you need someone to blame problems on, you take them and you move them out of the way," said Furutani. "If the issue was just historical, reminiscing, remembering old times, that would be one thing. But it's not, it has a contemporary application."

On Saturday, Furutani is scheduled to take part in the 50th pilgrimage to Manzanar, where an annual interfaith service will pay homage to the 10,000 Japanese Americans who were forcibly moved to the site.