The Sunwolves were handed a total rugby lesson Friday as they surrendered eight tries in a humiliating 52-0 Super Rugby defeat to the New Zealand-based Highlanders.

Playing in chilly rain at Prince Chichibu Memorial Rugby Ground, the Sunwolves' pack was overpowered at every opportunity as the team were kept scoreless for the first time in their four-year history.

"It's a brutal competition and if we show up not at 100 percent then bad things will happen like they did tonight," said Sunwolves head coach Tony Brown.

"We were not ready to play mentally and 50 points is a tough beating. We were lucky to get zero."

Brown's substitution of veteran prop Hiroshi Yamashita in just the 28th minute summed up a dreadful first half in which nothing went right for the home team.

Scrums went backwards at a rate of knots, penalties were conceded, tackles missed and tries given up as the visitors made it 33-0 at the break. 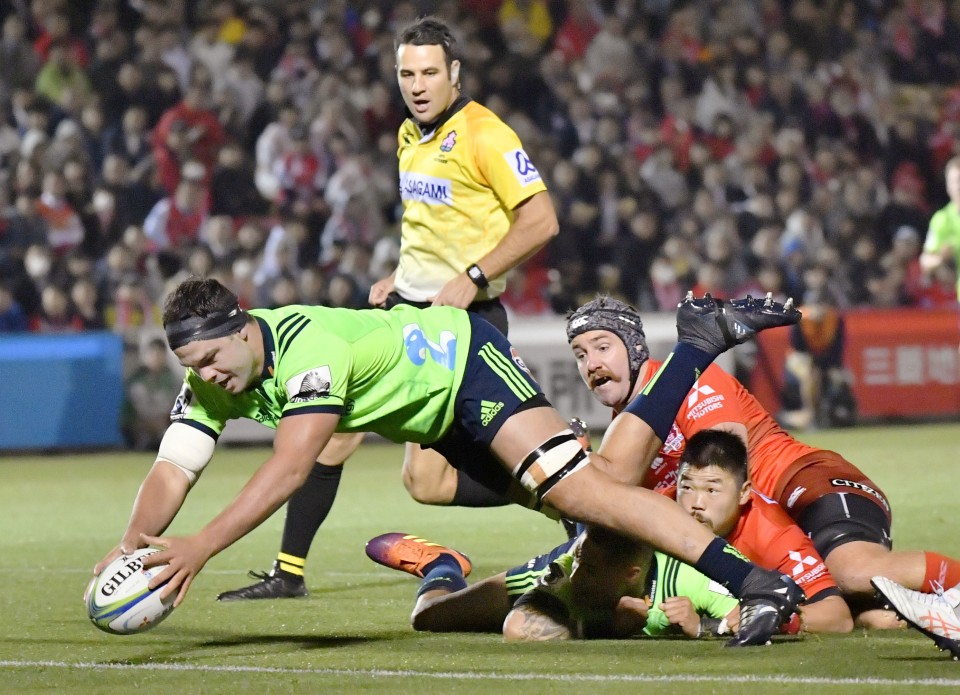 "Our scrum was a little too passive and you can't be passive against a good team. We have to play our Sunwolves' style of rugby, and the Highlanders just took that away from us in the first 40 minutes," said Sunwolves game captain Luke Thompson.

Defensively the visitors were supreme too, with their line speed forcing the Sunwolves into a number of mistakes.

"Our set piece defense worked well and that led to good positions with men over the ball and we made the most of it and punished them at the breakdown," said Highlanders captain Luke Whitelock.

With Brown making further changes at halftime, the Sunwolves started the second in brighter fashion. But they were unable to turn pressure into points, something the Highlanders had no problems doing.

Li added a second five-pointer before Rob Thompson and Sio Tomkinson rounded off the scoring to ensure the New Zealand side returns to Dunedin having greatly improved its chances of a top-eight finish and a place in the playoffs.

Franklin, who spent last season with Kobe Kobelco Steelers, Elliot Dixon (Ricoh Black Rams) and Jackson Hemopo, who will move to Mitsubishi Dynaboars at the end of the Southern Hemisphere season, were outstanding for the Highlanders up front while Aaron Smith and Ioane dictated play well at halfback.

For the Sunwolves, the only real positive -- aside from the crowd that never let up cheering for the full 80 minutes -- was they cannot be as bad next week when they take on the Reds in Brisbane.

"We learnt that when you are not at your best against a Super Rugby side, especially a New Zealand one, you get 50 points put on you," said Thompson. "We got what we deserved but we will definitely learn from it and be better next week."