Businesses in Britain are coming up with inventive ways to try to broaden the appeal of sake to European palates as Japan looks to increase sales in developed markets across the world.

For many Brits, sake is an acquired taste and only to be drunk with Japanese food. Often, people will first drink the beverage in Japanese restaurants with no idea of the brand or quality of what they are trying. 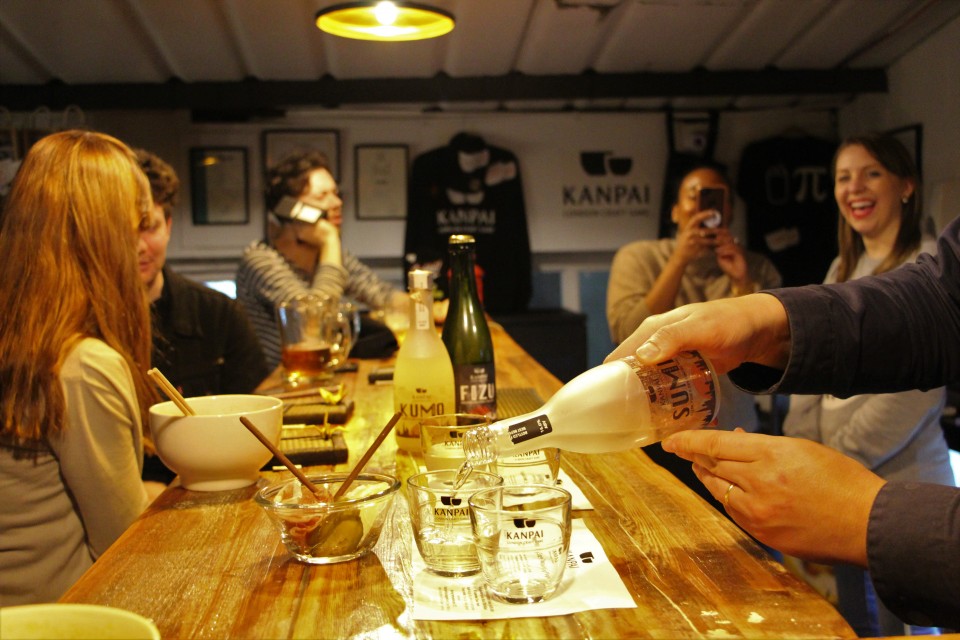 (Photo taken on Feb. 23, 2019 shows Tom Wilson, the owner of Kanpai London Craft Sake bar in Peckham, southeast London, pour sparkling "Sumi" sake as part of a tasting set. On the right in the background is Lucy Holmes, co-founder and co-owner of the brewer/bar.)

Now, a host of professionals are trying to change perceptions with some early signs of success although they admit more work needs to be done.

There are also attempts to boost sake's profile by producing it in Britain in an effort to cash in on the attraction of homegrown products.

The industry recently held a "London Sake Week" to encourage consumers to try the drink at participating restaurants across the capital. Attending an event held during the Week was Hirohisa Ichihashi, director of the food Division at the Japan External Trade Organization (JETRO).

He said that while sake is already known and enjoyed by those in the food and drinks industry, "it is still very unfamiliar and unknown to most consumers" in Britain.

Ichihashi cited sake's higher-than-average cost per unit (when compared to beer and wine) as another disadvantage but noted Britain's relatively high alcohol consumption, a result of its deep-rooted drinking culture, makes it an attractive market.

Rie Yoshitake, a representative of the Japan Sake and Shochu Makers' Association in Britain, believes the key lies in challenging commonly-held misconceptions, including the assumption that sake has a high alcohol content.

At around 15 percent or 16 percent alcohol by volume, sakes are only a shade more potent than wines.

Yoshitake's focus is now on changing the mindset that sake can only be drunk with Japanese food. Speaking to a sake symposium she said, "We have a very famous saying in Japanese that sake doesn't get into fights with food." 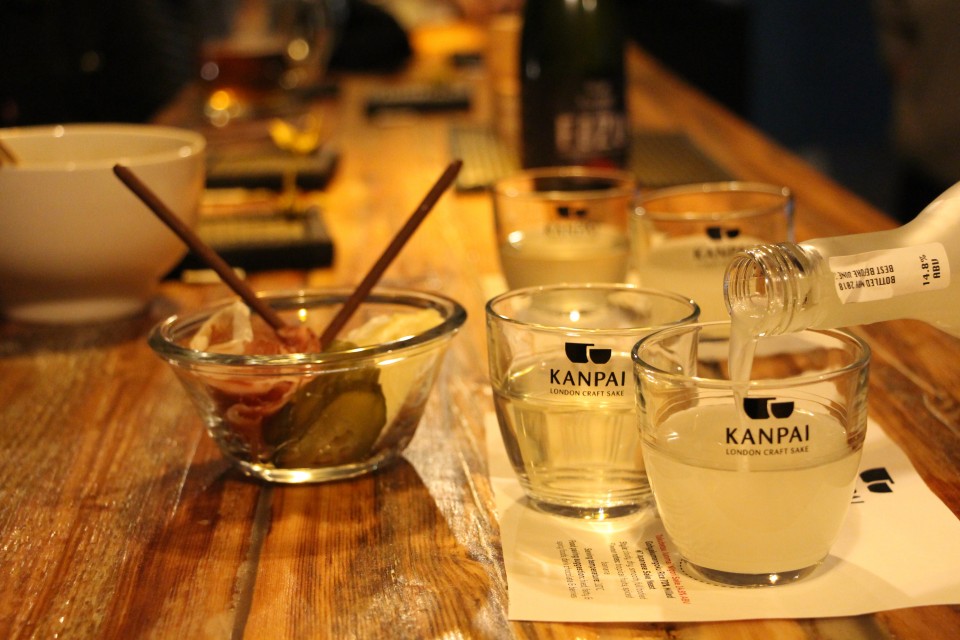 Unlike wine, which complements certain foods better than others, "sake is very forgiving," Yoshitake insisted. "It can pair with everything from seafood to rich beef, and even fish and chips!"

Lucy Holmes and Tom Wilson are founders and owners of Britain's first sake brewery, Kanpai London Craft Sake. The couple discovered sake while on holiday in Japan and started off home-brewing, launching their business in 2017 in southeast London. The following year they moved to bigger premises to enable them to expand production and open an accompanying bar.

Wilson said, "Because sake has come to Britain via Japanese food, you tend to find it tucked away in a restaurant fridge. People won't order it because they aren't comfortable, they don't know what they are doing."

The couple aim to do away with this image by creating an izakaya-style (Japanese pub) setting where sake can be drunk by itself or with different types of foods.

The bar offers a tasting set of their three in-house sakes served either with Japanese snacks or a selection of non-Japanese foods including cured meat, camembert cheese and chocolate.

"Obviously the association with Japanese food will always be strong, but you see that starting to change slightly," Holmes said.

The majority of wholesale orders the brewery receives now come from non-Japanese bars and restaurants. Holmes and Wilson added that while for now it is difficult to imagine British drinkers opting for sake over wine or beer in the supermarket, they believe there is a growing appetite to try it, not least among the growing numbers of people who have traveled to Japan on holiday.

The opening of Kanpai London Craft Sake was followed in 2018 by that of a second Britain-based producer, Dojima Sake Brewery, near Cambridge.

Dave Samuels, 33, who was visiting the Kanpai bar with friends, said, "I'd never had sake before, I'd only seen it in movies! I don't have particularly adventurous tastes but I liked it, especially the sparkling sake." Lindsey Hindmarsh, 27, added: "I liked it and I think most people would be surprised if they tried it. I think people would be more likely to try it if they knew a bit more about it, like what food it goes with."

According to figures from Japan's Ministry of Finance, exports of sake to Britain have remained largely stable and have shown only slight growth over the past 15 years, with a value of over 2.2 million pounds ($2.9 million) in 2018.

Yet with domestic sake consumption falling, producers and exporters are hoping to boost international sales and are setting their sights on the British market, among others.

The United States is the biggest importer of sake globally, followed by Hong Kong and China. But Britain remains the most valuable European destination, with British exports in 2018 worth almost a third of a million pounds ($437,000) more than those to France, the second-highest value buyer in Europe.