Panasonic ramping up ties with academia on human-assisting robots

A wearable "third arm" for construction workers is among the latest innovations under development in Panasonic Corp.'s burgeoning collaboration with academia as it seeks to make robots an increasing part of people's lives in aging Japan.

Panasonic already has knowhow in the use of robots in manufacturing, but has reached out to academia on robots that can safely assist with everyday human tasks given the wide range of technologies involved, such as image analysis, voice recognition and artificial intelligence. 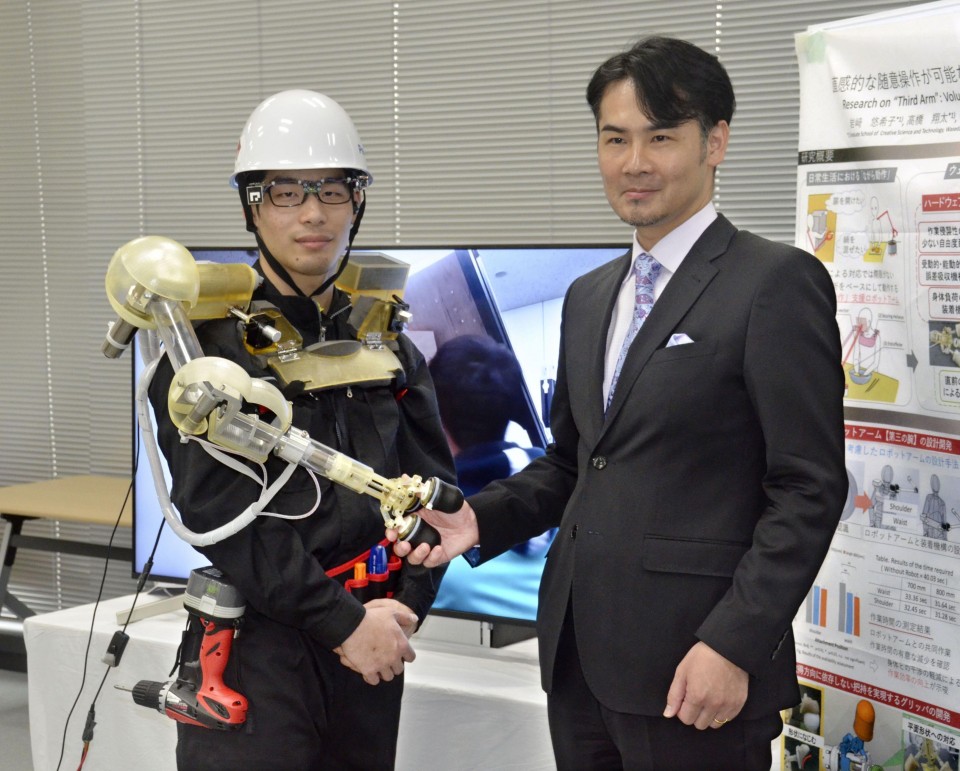 (A man wearing an arm-shaped robot poses with its developer, Waseda University professor Hiroyasu Iwata, in Tokyo on Jan. 25, 2019.)

"Robots previously had the purpose of facilitating automation in the manufacturing sector but are now expected to expand their role to enlarging human capabilities...amid the rapid aging of society and the labor shortage," Executive Officer Tatsuo Ogawa said at the opening of the Robotics Hub, a new site in Tokyo for the company's collaboration with academia.

"We lack a lot of knowledge when it comes to robots used in interaction with humans," said Ogawa, who leads Panasonic's manufacturing innovation division. "We want to work with academia to speed up the development of robots that humans can cohabitate with and to lower the barrier for their implementation."

The "third arm" is an initiative the company is working on with Waseda University Professor Hiroyasu Iwata. It launched the project after learning from group firm Panasonic Homes Co. that construction workers face particular difficulties attaching ceiling boards.

The robotic arm, which attaches to the user's shoulder, is controlled via eye movements and grasps objects in response to voice instructions.

"Through the robotic arm, I want to explore opportunities for humans to feel that they can do more and be more productive," Iwata said. "It could free us from a preset image we have of our bodies. Through a collaboration of our ideas with the techniques of companies like Panasonic, which has expertise in product manufacturing, I hope we can make a product that is attractive to consumers."

Panasonic said it will first collaborate at the Robotics Hub with six universities with strengths in robotics, including Waseda, the University of Tokyo, the Chiba Institute of Technology and Ritsumeikan University, with the number of partners expected to grow. 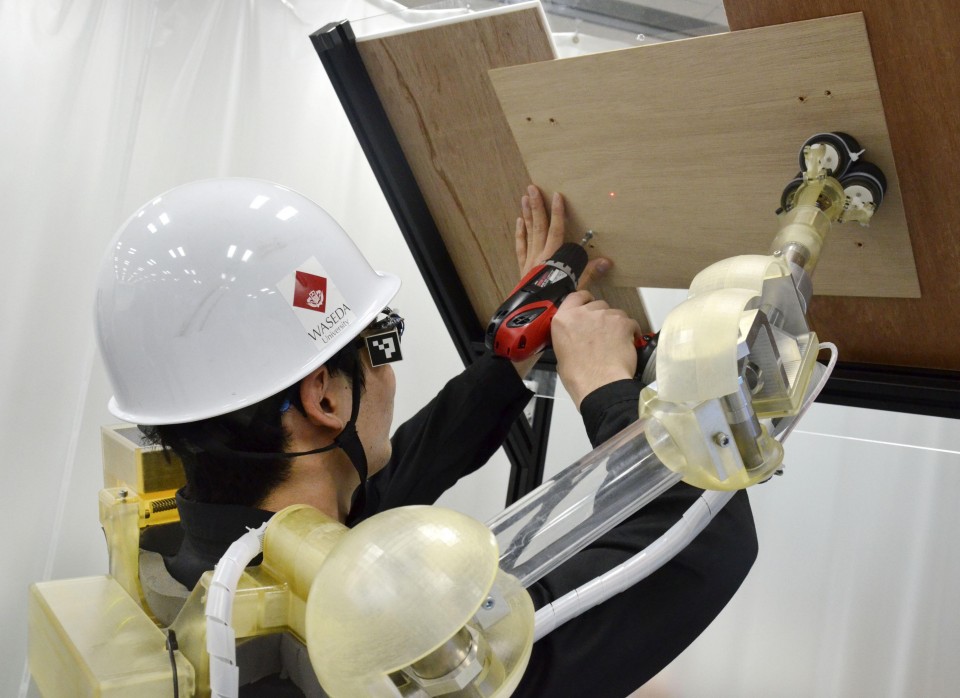 With the Chiba Institute of Technology, Panasonic aims to put on sale later this year an AI-powered robot vacuum cleaner that can recognize objects and cope with uneven surfaces by, for instance, lifting itself onto rugs. It can detect the shape of rooms as well as the movements of people within them.

Users can remotely control the robot by smartphone or tablet, for instance to make it clean a certain spot or have it travel back to its recharging station.

In collaboration with Nagoya University, Panasonic has developed a robot to help the elderly take walks.

The device is expected to be particularly useful at nursing homes and hospitals, where there is currently a fear of letting the elderly walk outside since they might fall or be forced to ask for assistance.

The robot, which is in the shape of a handcart, plays light music while moving and encourages the elderly user by saying, "Let's walk more." 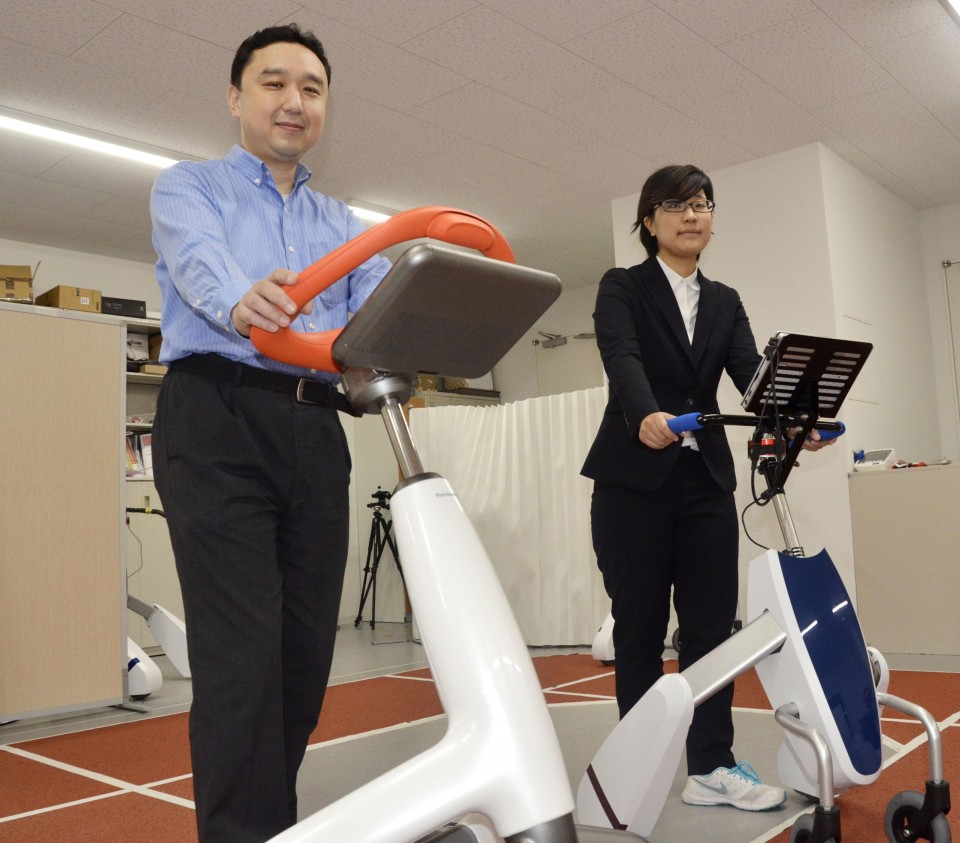 The robot has sensors attached to the handles to measure and collect data on the user's walking speed and distance covered, from which it can recommend the most suitable usage time.

After conducting trials at a nursing facility in Toyota, Aichi Prefecture, Panasonic hopes to start leasing the robots this summer.

"With more elderly expected to live by themselves in the future, this robot can perhaps become like another family member by always being at their side and helping them walk," said Kazunori Yamada, lead engineer at Panasonic's Robotics Solutions Division.

"I hope to develop the robot so that it will be something fun to train with," he said.

The New Energy and Industrial Technology Development Organization estimates that the domestic market for robots used in the services sectors will be worth about 5 trillion yen ($45 billion) in 2035, up from 373 billion yen in 2015.