Prime Minister Shinzo Abe's ruling coalition pushed the spending plan through the House of Representatives past midnight, even as opposition lawmakers halted deliberations the previous day by submitting a no-confidence motion against a Cabinet minister over his handling of a faulty jobs data scandal. 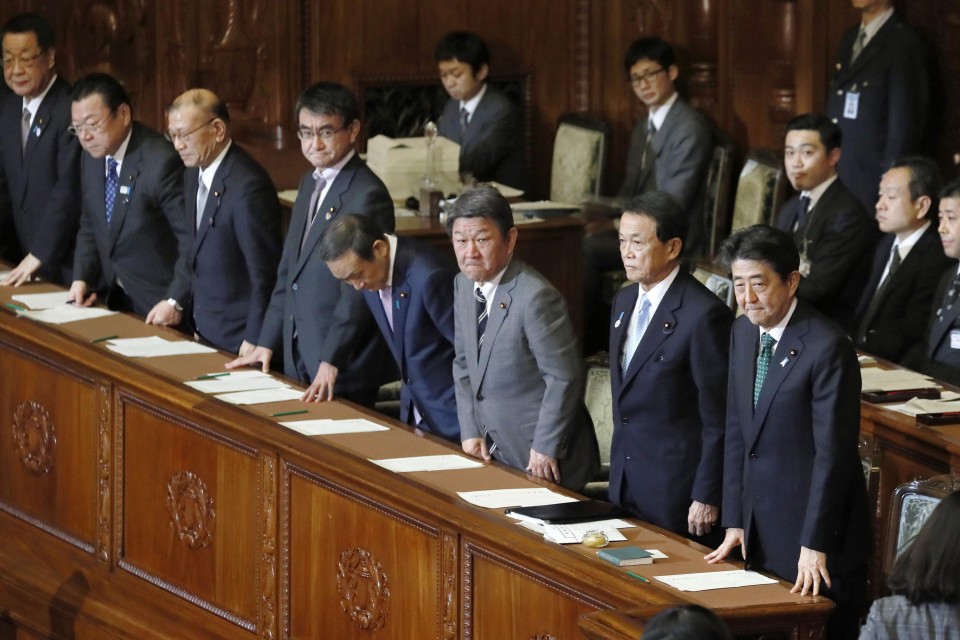 Abe's Liberal Democratic Party and coalition partner Komeito had initially hoped to pass the budget in the lower house on Thursday, but the plan was delayed as opposition forces tabled a vote of no confidence against labor minister Takumi Nemoto.

Kiyomi Tsujimoto of the Constitutional Democratic Party of Japan told reporters Nemoto had been "insincere" in dealing with the discovery that officials at his ministry had been publishing the results of a monthly labor survey that had been improperly conducted over nearly 15 years.

Nemoto, who was appointed in October, said he had done his job "to the best of (his) ability." The motion was later voted down by the ruling bloc.

After clearing the lower chamber, the budget will be sent to the House of Councillors. But it is certain to be enacted before fiscal 2018 ends on March 31 because the Constitution stipulates that lower house decisions take precedence over upper house ones.

The budget thus automatically takes effect 30 days after the lower house passes it.

The spending plan has already been through twists and turns. Less than a month after being approved by Abe's Cabinet in December, it had to be reworked to include 650 million yen in costs related to the labor data scandal that resulted in the underpayment of work-related benefits to more than 20 million people in Japan.

More than a third of the budget, a record 34.06 trillion yen, will go toward social security programs such as pensions and health care. Government spending on such programs has continued to rise as the elderly make up an increasingly large part of the population.

Defense spending will also hit a record high of 5.26 trillion yen, partly due to purchases of the Aegis Ashore missile defense system and half a dozen F-35A stealth fighters.

As part of its efforts to alleviate negative effects when the consumption tax is increased from the current 8 percent to 10 percent on Oct. 1, the government has earmarked 2.03 trillion yen in fiscal measures including a rebate program for cashless purchases and shopping vouchers for households with low incomes or small children.