For many Americans, the story of the Japanese fishing crew who were exposed to a U.S. hydrogen bomb test in the Pacific Ocean 65 years ago may be a footnote in history easy to overlook.

But Keith Reimink, a 40-year-old American documentary filmmaker, reacted differently when he came across in 2014 a tiny paragraph mentioning the incident in a nearly 500-page book criticizing the U.S. management of nuclear weapons. 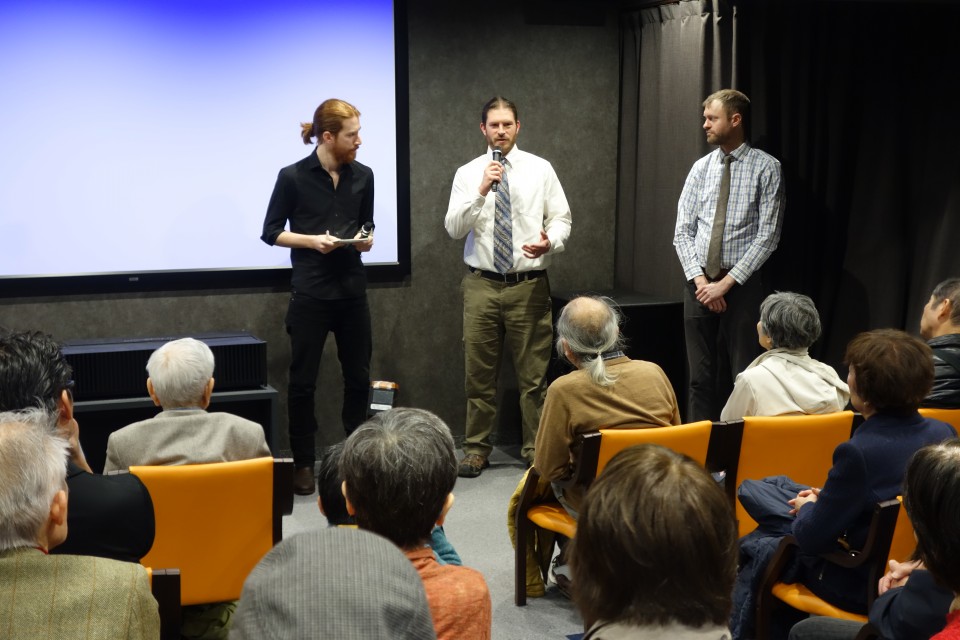 (Keith Reimink, center, speaks about the 75-minute Japanese language documentary film "Day of the Western Sunrise," during a screening event in Tokyo on March 2, 2019. His brother Troy Reimink, right, composed the music for the film.)

Little was mentioned except for the fact that the 23 Japanese men aboard the tuna fishing vessel Fukuryu Maru No. 5 suffered radiation poisoning and that one of them died. But the Pittsburgh-based movie director was intrigued, and by the end of the year, his group was already in Japan to film interviews with three of the former fishermen.

Four years on, Reimink's indie film company released last September in the United States a 75-minute documentary called "Day of the Western Sunrise" that depicts the horror of nuclear weapons through the vivid accounts of the fishermen and flashbacks of the incident presented as animation.

"The vast majority of Americans have not heard about any suffering related to nuclear tests after World War II ended...People need to learn about the legacy of nuclear testing in America so that it doesn't happen again," Reimink, who made his debut as a film director in 2012, told Kyodo News when he recently came to Japan for the film's first public screening in the country.

What may also be surprising is that Reimink chose to use a Japanese-language narration throughout the film, even though he does not speak the language himself, with English used only in subtitles.

"It's more impactful that the whole movie is in Japanese," he said, expressing the hope that viewers will be brought into the story by sticking with the "rhythm" of Japanese throughout and see that the emotional struggles and concerns expressed transcend language in their universality.

The film opens by noting that most people believe that Japan's experience of nuclear weapons ended with the U.S. atomic bombings of Hiroshima and Nagasaki in August 1945.

But another tragedy occurred on March 1, 1954, when the United States conducted its largest-ever nuclear weapons test, code-named Castle Bravo, at the Bikini Atoll in the Marshall Islands. The explosion brought higher levels of fallout than predicted, contaminating the islands and boats sailing in the vicinity.

The three former Fukuryu Maru members recall in the film the moment of the blast that forever changed their lives. As a flash lit up the western sky, one of them shouted, "The sun rises in the west!"

A total of 22 crew members survived the initial illness, but further hardships awaited them. They were shunned by the local community amid rumors that radiation sickness was communicable, sometimes rejected when seeking marriage partners and haunted by fears that the exposure might still affect their health and their offspring as well.

Matashichi Oishi, 85, who has been the most active among the survivors in recounting his experiences in public, talks in the film about his first child being stillborn and deformed, which he kept a secret for a long time. "It could happen to anyone who is exposed to radiation," he warns. 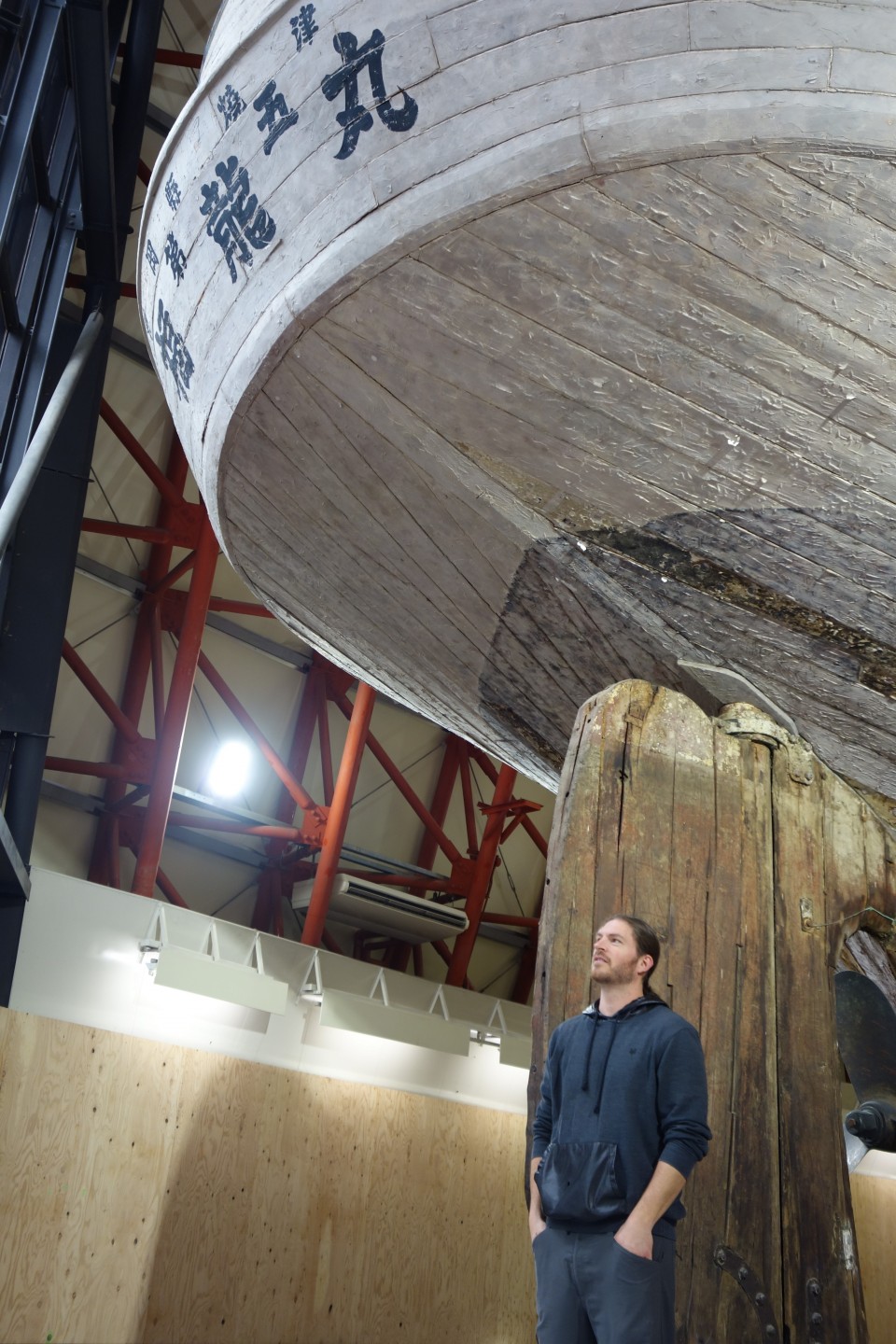 (Reimink visits an exhibition hall in Tokyo displaying a Japanese tuna fishing vessel hit by nuclear fallout from a1954 U.S. hydrogen bomb test in the Pacific on Feb. 26, 2019. The hall is currently closed due to renovation work and will open on April 2,2019.)

While coordinators in Japan helped set up the interviews, Reimink was initially nervous about meeting the fishermen, worrying that his team might be seen as representing the country that caused their "pain and suffering."

The aging Japanese men were in fact willing to speak, yet the language barrier was a challenge. It took some eight more months after the actual interviews in December 2014 until Reimink felt sure about making a documentary film out of it because he had to wait for a translator to return the footage with English subtitles.

"We had to kind of go forward (during the interviews without grasping the details) because we only had two hours (per fisherman)...Then we just crossed our fingers, hoped that it worked."

And it did work out. The footage revealed "personal and intimate" accounts of the fishermen, leading Reimink to think that the film should be "a Japanese story" and that there is "no room for an American opinion."

As well as insisting on the narrator speaking in Japanese against the advice of many people, Reimink adopted an animation style inspired by Japanese traditional "kamishibai" storytelling that combines hand-drawn visuals with engaging narration.

The use of animation did not just help keep the production cost low, compared with using expensive archival footage, but is also expected to increase the educational potential for children of all ages, including for those who may be too small to understand the whole story but still are able to engage with the pictures.

To reach out to a wider audience, Reimink also decided not to "talk about politics" in the film, such as the controversial settlement in January 1955 under which the United States paid $2 million as sympathy money to the boat's crew and others without admitting liability.

Mari Ichida, the curator of an exhibition hall in Tokyo displaying the boat, called Lucky Dragon in English, said the documentary is a "valuable" record, with most of the crew members already having passed away and the remaining survivors becoming frail.

Just before the film's first screenings started in Japan in late February, Susumu Misaki, another fisherman who appeared in the film, died of lung cancer in Shizuoka Prefecture at the age of 92.

"It makes us feel anxious to work harder to keep the memories alive. But we can't do this just by ourselves," Ichida said, adding she hopes as many people as possible see the film to increase awareness of the incident.

Nobuo Miyake, a 90-year-old survivor of the atomic bombing of Hiroshima, said after watching the film in Tokyo that it showed there is a diversity of opinion in the United States on the morality of nuclear weapons.

"I felt there are various opinions among people in the United States, like this film's director, who believe that nuclear-weapon testing is wrong," he said.

Reimink said he believes his country, under U.S. President Donald Trump, has taken a less global perspective on nuclear disarmament, calling it "very scary." But he said he and his team hope that their film project will help "increase communication" between the United States and Japan so that they can work together toward building a safer world.